We Should Transform Disaster Response Training Into Jobs For Veterans

Over the past decade, military veterans have flocked to organizations like Team Rubicon. In January 2014, Team Rubicon claimed a... 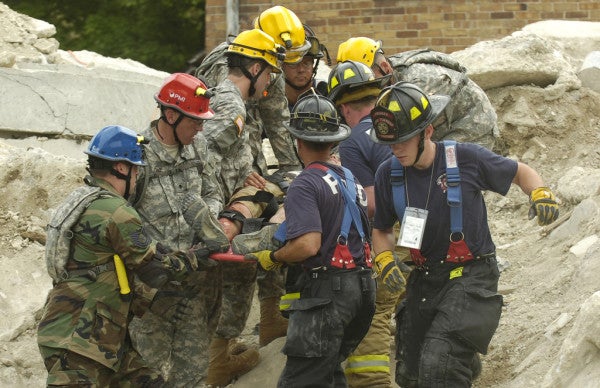 Over the past decade, military veterans have flocked to organizations like Team Rubicon. In January 2014, Team Rubicon claimed a member base of over 14,000. It shouldn’t surprise anyone why we in the veteran community want to be a part of TR. We join in order to continue to serve, to continue to use our military training and leadership, and to retain a sense of camaraderie and esprit de corps. TR has an abundance of esprit de corps. Personally, I have many friends that I developed through TR and consider myself an ardent supporter.

For the most part, that is exactly what we get: elemental bonds through shared sacrifice and the feeling that we are still obligated to something larger than ourselves. However, what makes veterans excel at disaster response is our organizational skills, our focus on 80% solutions, our ability to deploy light and quick, and our ability to embrace the suck, which have keyed us into a very specific aspect of emergency management. These aptitudes are so tied to disaster response that we don’t really see our abilities utilized in the other phases of emergency management, such as mitigation, preparation, and recovery.

We can do more. We could engage veterans on another level by developing real-world skillsets in disaster and emergency management rather than just skills specific to response. Ancillary skill building would come in public speaking, project management, political science, urban planning, utilities, and community advocacy, which are not necessarily at the center of veterans focused on response. These real-world skills are transferable to many different career fields in both the public as well as private sectors.

In 2013, the average unemployment rate for service members who served on or after September 11, 2001, rested at 8.8% for male veterans and 9.6% for female veterans, compared to an average of 7.5% and 6.8% for non-veteran males and females, respectively. Traditional professional first response careers, firefighters, police officers, and emergency management technicians, are generally hiring at a slower than average pace and have a combined median salary of $44,000. In short, as many who have tried can attest, breaking into a paying job as a first responder is a monumental task.

Conversely, career fields with cross-cutting relevance to the emergency management field, urban planning, geographic information systems, and community organizing, among others, have an average to higher-than-average hiring pace and a combined median salary of $62,680. If veterans still need good jobs, it should be apparent that we need to put some thought into refocusing some of these disaster-focused veterans into the other phases of emergency management.

As a former psychological operations specialist, I can see the direct relevance of winning the hearts and minds in Iraq and Afghanistan and engaging low-income community members in core emergency management tasks such as addressing evacuation plans and fire mitigation projects. I see this type of activity as a natural extension of veteran skills. This is apparent in the work of the 6th Branch. Founded and currently led by Tillman Military Scholars, the 6th Branch is a beacon of light in Baltimore.

The 6th Branch began as Operation Oliver in 2011, using a small cadre of veterans to mobilize community members in order to revitalize the Oliver community of Baltimore. The results of Operation Oliver and follow-on missions such as Operation Ambrose Kennedy and Oliver Community Farm will reverberate in that community for years to come.

From my vantage point, I see a clear need for veterans who are interested in disaster and emergency management to be engaged in long-term, sustainable disaster mitigation and preparation projects. Veterans would benefit through increased knowledge of each phase of all-hazards emergency management as well as cross-functional knowledge of community planning and engagement. They would also be able to network with a very diverse audience while advocating for mitigation and planning projects.

Rick Schumacher served as a PSYOP Team Leader in Northern Iraq (2003-2004). He is a graduate of the Hauptmann School of Public Affairs with a MPA in Disaster and Emergency Management. He is a Tillman Military Scholar and is developing the Community Vanguard Initiative, a veteran-focused organization centered on community engagement in emergency management.