Job Envy: This Veteran Used His Desire To Stay In Touch With His Marine Buddies To Start A Company 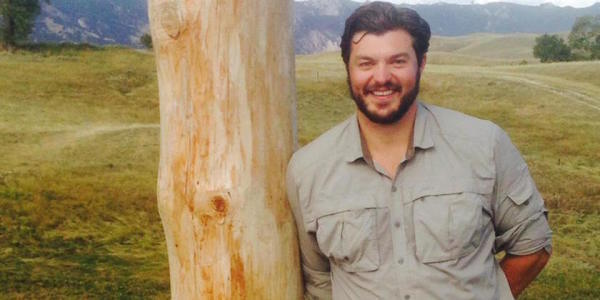 Employer: Founder and CEO of Sandboxx

Often, it feels like the most memorable parts of the military are the dumb things service members get into with their friends. That and the stories that are shared afterward; so it makes sense that this is what inspired one Marine veteran to start a military-specific social app focused on connecting military members and veterans.

Meek shared the motivation for his company, Sandboxx, with Task & Purpose.

Time in the military

Meek served as a nuclear biological and chemical defense specialist — now called chemical biological radiological and nuclear specialty — while in the Marines from 2002 to 2007, and deployed to twice to Iraq, serving in Taqqadum and Fallujah.

Barely into his thirties and already the CEO of his own company, Meek attributes his easy handling of responsibility to his time in the service, and given that his job was disposing of dangerous chemical or radiological waste, it makes sense. Meek was also tasked with training Marines in proper use of the potentially lifesaving equipment, as well as how to manage multimillion dollar facilities.

“The biggest lesson I took away was the value of the team,” explains Meek, who left the Marines as a sergeant in 2007. “There is a fine line between ego and humility; no one leader can do it all and must rely on others to work together as a well oiled machine. … Today, I look at the strength of our collective team as a sum of the individual strengths each person brings and blends to achieve whatever the task at hand may be.”

Sam Meek outside of Saddam Hussein’s Air Command Headquarters, in Taqqadum, Iraq. The air center was converted to 2nd Marine Logistics Group Headquarters when Meek was there in 2004.

Launching a company to stay in touch with friends

As Meek sees it, Sandboxx is a natural expansion of how service members stay in touch with loved ones back home, and vice versa. In a digital, and in particular, mobile era, it just isn't reasonable to expect handwritten letters, explains Meek, and though many would-be poets and literary types may disagree, Meek is right when he says, “This generation doesn’t keep a stamp and pad of paper in their drawer.”

Part of the app, called Mailboxx, allows subscribers to submit a message, after which, Sandboxx prints a hard copy of the letter and mails it to the recipient, along with another envelope and a stamp. The idea is that family and friends back home can send an actual letter to those overseas, with minimal effort.

The other part of the app focuses on the social nature of the military, in particular, the camaraderie between members of the same unit.

This part of Sandboxx, called Chatboxx, functions similarly to Facebook in the sense that it has a newsfeed. It’s private, and also user controlled, which means that veterans and active-duty service members can hop on their unit pages and chat with old war buddies without worrying that their mothers will hear unsavory language — and the more wholesome reason: Sometimes you just want to reconnect with those you served with, and not the entirety of Facebook.

“What's beautiful about Sandboxx is that it's all community led and driven,” says Meek. “We let our community drive everything we do. When I tried to connect to the guys I served with there was no way to do it, that was the genesis around this app.”

Beyond the purely nostalgic, Meek sees his company’s mission as serving a larger purpose.

“Our troops defend our freedom and their desire to fight for it grows as they are able to stay connected to the loved ones that make life worth living for,” says Meek, adding, “Our loved ones photos and letters hold us together while we serve and protect our country.”

How luck (good and bad) played a role in his transition

After leaving the active duty in 2007, Meek did what many freshly liberated Marines do: He took an entire summer off just to have fun and ponder the question, “What next?” He found work at Blind Brook golf course in Port Chester, New York, where he met Walter Raquet, who would later prove instrumental in his development as a businessman. It started with an interview in the Fall of 2007, when Meek was invited to Raquet’s office.

“I had no idea what I was interviewing for. Walter met me outside, and spent a few hours explaining what a hedge fund was, and how it produces a return on capital. Before I could blink, he hired me to be his marketer at WR Capital Management,” says Meek.

Over the next four years Meek had a chance to work with the leading innovators of the alternative assets space. He even began taking night classes to study economics at the University of Connecticut’s Stamford campus.

“It was hard to work a full-time job and be a full-time student, but Walter was flexible and gave me time to study as I needed it,” Meek says.

Unfortunately, WR Capital Management, and Meek’s time with it, came to an unexpected end in 2011. The company scaled up in size, hiring on more employees in expectation of a larger investment, which fell through suddenly. After that, things began to unravel, due to little more than bad luck, or Murphy’s Law, explains Meek, meaning that anything which can go wrong, will go wrong.

Still, Meek attributes much of his success to what he learned at WR Capital Management during that time.

“One of the greatest things I learned there was that a really strong business and very capable leaders can fail,” explains Meek. “Watching them fail was one of the most significant things I can attribute to the way I view the world now. Murphy’s Law comes into play all the time, not unlike the fog of war — so many unforeseen variables outside of our control. Those things are really hard to mitigate and all you do is try to make a good plan and stick to it.”

But, Meek says, “Being able to efficiently manage chaos is what an entrepreneur does,” adding that it’s also something Marines do quite well.

“If there's any advice I can offer to those getting out of the military, start to have conversations with friends and family about what to do next six months before EAS,” suggests Meek.

Or, just take a summer off and wing it — it worked out well for him.