Once a fighter jet training base critical to the Cold War, little remains of the former George Air Force Base... 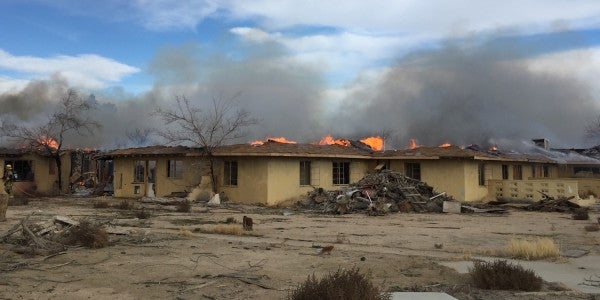 Once a fighter jet training base critical to the Cold War, little remains of the former George Air Force Base but rows of dilapidated houses, a dismantled military hospital and dangerous chemicals from pesticides, jet fuels and other hazardous wastes that have poisoned the water for decades.

“Now when I see the base today, areas of it look like a war zone,” said Frank Vera, an Air Force veteran stationed on the base in the early 1970s. “I don't think people know what to do with some of these areas because they are so contaminated.”

George is among at least 400 active and closed military installations nationwide where the use of toxic chemicals has contaminated or is suspected of contaminating water on bases and nearby communities with chemicals ranging from cleaning solvents and paints to explosives and firefighting foam, according to a News21investigation.

At 149 current and former U.S. military bases, the contamination is so severe that they have been designated Superfund sites by the U.S. Environmental Protection Agency, meaning they are among the most hazardous areas in the country requiring cleanup.

One of those installations, Hill Air Force Base just north of Salt Lake City, is both one of the state's largest employers, with 21,000 employees, and a Superfund site. Since 1987, the EPA has been monitoring the base, where more than 60 chemicals were found in soil and groundwater. According to EPA records, an “unsafe level of contamination” still exists on some areas of the base.

George Air Force Base, Victorville, California from News21 on Vimeo.

“Even though the DOD has made significant strides in identifying and investigating the level of contamination at domestic base sites, the pace of actual cleanup has been quite slow,” according to a research study from the Berkeley School of Law. “As the Governmental Accountability Office (GAO) recently found, 'most of the time and money has been spent studying the problem.'”

According to a 2017 GAO report, the Department of Defense already has spent $11.5 billion on evaluations and environmental cleanup of closed bases, and it estimates $3.4 billion more will be needed.

In March, the DOD said it would be testing the water at 395 active and closed bases across the country to determine whether perfluorinated compounds are contaminating the drinking water on bases and in communities around them.

Originally developed by corporate giants 3M and DuPont for use in consumer products like Teflon, Scotchgard and stain-proof clothing, these chemicals, known as per- and polyfluorinated alkyl substances (PFAS), were used by the DOD since the 1970s in firefighting foam to extinguish jet fuel fires.

In 2012, the EPA added PFAS to its list of unregulated contaminants that may be hazardous to human health, though records indicate the Pentagon knew of the hazards decades earlier. In 1981, the Air Force Aerospace Medical Research Laboratory conducted studies that found that exposure to earlier variations of PFAS were harmful in female rats and caused behavioral changes in offspring.

Because the chemicals don't break down easily, communities still are finding them in their drinking water. For example, in May, residents in Airway Heights, Washington, were instructed not to drink their tap water after elevated levels of PFAS were found in drinking water wells on and around the active Fairchild Air Force Base.

“I think it's crazy that pretty much the whole time I've lived out here, approximately 12 years, I've been drinking bad water,” said Martha Grall, an Airway Heights resident. “Because they didn't feel like sharing that information years ago, I have no faith in believing anything they have to say now when they try and tell us it's safe now.”

Though the Air Force started treating the water, Grall said, “As far as trusting the tap water, I don't think I ever will.”

Fairchild is one of more than 30 bases where PFAS contamination was discovered this year. In 2015, the DOD reported to the GAO that “the cost of cleaning up perfluorinated compounds will likely be significant.” The Air Force had budgeted $100 million over a five-year period for the investigation and remediation of the chemical. However, the Air Force has already spent more than $150 million as of June 2017.

As of August, the DOD had yet to complete testing for PFAS at more than 200 bases.

“The biggest concern right now is that the Air Force hasn't had any sense of urgency,” he said. They ought to be leading the effort to solve this problem. To find people who might have been affected, and to provide whatever relief is appropriate.”

But U.S. Navy Commander Patrick Evans, a Pentagon spokesman, told News21 in a statement, “We take this matter very seriously and pledge an unshakable commitment to protecting human health and the environment.”

The former George Air Force base sits on the edge of the Mojave Desert in California. Many parts of it are abandoned. The operations building and movie theater are boarded up. Tumbleweeds, mounds of concrete and building materials fill the dugout of an old baseball field. But while almost any sign of military life is gone, the water contamination is not.

“The Air Force is promising to clean it up,” said Vera, the veteran who served at the base. “But in the end, they are just walking away from the contaminated bases and the people are stuck with this nightmare.”

In 1990, the base was added to the EPA's Superfund list. Jet fuel, benzene, trichloroethylene (TCE), pesticides and radioactive wastes have contaminated groundwater, EPA records show.

USGS digital orthophoto of George Air Force Base in California

George was closed in 1992 as part of the Base Realignment and Closure, or BRAC. Within one year, the DOD began transferring land over to local communities to be redeveloped. But 25 years later, the water still is contaminated.

“You don't see George as far along as some of the other military bases,” said Bill Muir, the senior engineering geologist for the Lahontan Regional Water Quality Control Board, responsible for protecting water in the region.

In 2015, PFAS chemicals also were found by the Air Force in the groundwater at the base, a potential threat to the businesses that have been built on the base, as well as surrounding communities.

“We're not aware that the perfluorinated compounds have impacted any of the drinking water wells downgradient of the base,” Muir said. “There is potential, and that's why the Air Force will be sampling in the future, and we'll encourage that.”

Vera, 64, worked in the gun shop, where he said he used chlorinated solvents to clean weapons. “I would come out of there drenched in TCE,” he said. “They would empty the wash tank periodically and just dump it down the drain.”

“The Air Force and the government in general, betrayed not only me, but everyone who stayed at these Superfund sites because they absolutely knew that they were contaminated,” said Vera. “They knew the harm it would possibly cause us.”

“I drank gallons and gallons of water because it was the desert,” he said. “A lot of times, it was dark and had a real chemical taste. It tasted like JP-4, jet fuel.”

In 2008, Vera created a website, Georgeafb.info, which started out as an “information repository” to keep his records and documents. Lisa McCrea, a former military wife, learned about the tainted water from his website.

“Lots of us didn't know a thing about the contamination,” said McCrea, 49. “We owe so much to Frank for his tireless years of work on this, trying to bring this to light (and) letting everybody know because there's still families out there that have no clue.”

McCrea lived on the base with her family for four years. She recalled the unsettling memory of pesticides being sprayed on her home, leaving yellow stains on the walls and on their clothes. In July, she made the trip from Ohio to California to revisit the base.

“It's hard to believe that we used to live here day in and day out without any protection,” said McCrea, standing in front of her former house. “And it's even more upsetting that they (Air Force) let us live here without doing anything about it.”

Terri Crooks, 59, is an Air Force veteran who was stationed on the base in the mid-'80s where she worked as an administrative clerk. She later was diagnosed with breast cancer and gynecological issues.

From Vera's website, Crooks learned that her conditions could be related to exposure to pesticides and submitted a claim to the Department of Veterans Affairs in 2015. The VA awarded her 70 percent disability, acknowledging that her health conditions could be connected to her military service at the base.

Crooks was exposed to the chemical nearly 40 years ago, but Muir said a pesticide plume is among George's biggest contamination problems even now.

“The Air Force needs to work to aggressively treat these zones of contamination,” Muir said. Instead, it proposed using Monitored Natural Attenuation, a remediation strategy that allows nature to break down the chemicals over time.

Phil Mook, a senior representative for the Air Force Civil Engineer Center, which is overseeing cleanup at George, said the Air Force has spent the last 30 years removing contamination.

“We've done a lot of work,” Mook said. “We still have work to do. In about 30 years, we'll have much smaller TCE, fuels and petroleum. Estimated, another 70 years after that, we have the last little tail of it.”

But according to the Lahontan Water Board, that treatment at George could take up to 500 years for the pesticide and solvent contamination to reach safe levels, and up to 40,000 years for areas of fuel contamination in the groundwater.

The MNA method is used at more than half of the military locations classified as Superfund sites, according to EPA data.

“We have been forgotten,” McCrea told News21. “The base closed, everyone scattered to the wind, and I guess they figured, problem solved,” she continued. “To this day, there has been no word from the United States Air Force about the contamination at George Air Force Base.”

This report is part of the Troubled Water project produced by the Carnegie-Knight News21 initiative, a national investigative reporting project by top college journalism students and recent graduates from across the country and headquartered at the Walter Cronkite School of Journalism and Mass Communication at Arizona State University.