Stationed At Camp Pendleton? Enjoy These Dead Animals In Your Drinking Water 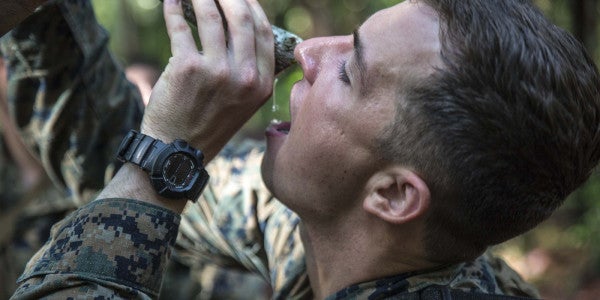 Well, that’s a weird protein supplement, even for Marines.

West Coast devil dogs stationed at California’s Camp Pendleton know that hydration is key to good health. And their leaders insist the drinking water on base is perfectly fine for human consumption. Don’t worry about the “rats rotting on a reservoir gate, a desiccated frog clinging to a reservoir ladder and another rodent carcass floating in treated water” that federal inspectors found in the base drinking supply in June.

Some of what the EPA found.Environmental Protection Agency

That’s what San Diego Union-Tribune reporter and Marine veteran Carl Prine learned in conversations with officials from the Environmental Protection Agency, which forced the Marine Corps to admit Sep. 28 that it needed to do a better job of following federal clean water regulations on Pendleton — home to 55,000 Marines, staffers, and dependents, as well as a federal Superfund site.

Investigators found “vulnerabilities in the condition of our physical plant with specific emphasis on our 34 treated drinking water reservoirs across the base,” according to internal Marine documents circulated Thursday. Which is true, but hardly scratches the surface… the rodent-rich surface. Prine explains the worst is hopefully past, though:

EPA officials told The San Diego Union-Tribune that after the Marines failed the June inspections, workers removed all animal remains from the system, cleaned the reservoirs, began routine testing of the water for Coliform bacteria and chlorine levels and pledged to keep surveying water quality to ensure it was safe to drink.

“Simply put, the water is and has been safe to drink. Camp Pendleton is committed to providing safe and compliant drinking water. This is a duty and responsibility that we take very seriously,” said base spokesman Carl Redding in an emailed statement.

So says the Corps. If you want to read what investigators say — and you really should — check out Prine’s full report.

The Corps, which has had to deal with a rash of fatal and injury-causing mishaps in the Fleet Marine Force this year — including a major AAV fire at Camp Pendleton — is no stranger to serious drinking-water issues on its major bases either; since the 1950s, Camp Lejeune Marines have reported a variety of serious health complications that were attributed to toxins in the drinking supply; that incident is still the subject of federal study.

As for the causes of Pendleton’s potable pestilence, Prine reports there are construction delays and “treatment operators working 12-hour shifts who make $20,000 less per year than employees at neighboring water districts, hampering hiring and staffing.”

The base also lacks a central control system to monitor sensors in the water supply. It had one, but it’s busted, Prine writes, “because of lack of maintenance, wildfires and the loss of Marine Corps cybersecurity accreditation.” Somebody’s getting a low mark in the “Mission Accomplishment” block on their fitrep.