A Marine Corps Vet Reflects On His Favorite Military Gyms

As a 15-year-old military brat, I began lifting weights at the standard-issue base gym. Typified by their Cold War concrete,... 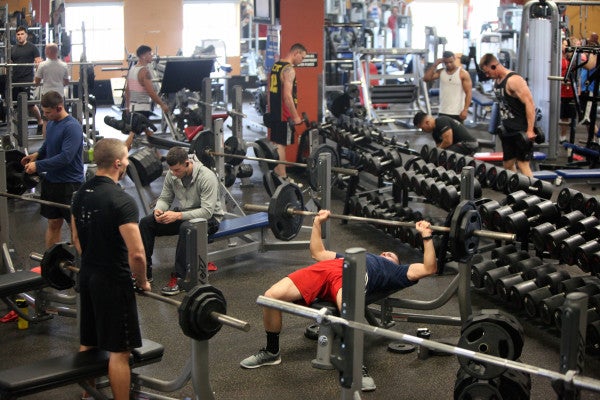 As a 15-year-old military brat, I began lifting weights at the standard-issue base gym. Typified by their Cold War concrete, chipped gray paint, and noise-rattling drinking fountains, these high-ceilinged warehouses of iron offered an arena to achieve life-changing goals through punishing effort.

When I became a Marine — like many Marines I came to know — I continued my iron adventures and made it my mission to find the military’s most hardcore gym.

As I look back, I earned calluses and sore muscles from more than 100 military gyms, from Maine to Key West and Virginia to California, and many of the bases in between. Even while deployed overseas, my Marines and I built field expedient gyms in the desert, substituting sandbags for medicine balls, five-gallon water jugs for dumbbells, and ammo cans for steel plates.

So now, 25 years after the iron bug bit me, I wanted to share some hardcore memories from my favorite military gyms.

Isolated on the north side of Camp Pendleton, and squeezed between a narrow pass of mountains, Camp Horno is home to the 1st Marine Infantry Regiment. Packed with testosterone and echoing profanity, it provides a manscape for 19-year-old lance corporals and their high-powered 22-year-old noncommissioned officers and lieutenants.

As an outsider, stepping into the Horno Gym would be like walking into a biker bar unannounced. I still have memories of Pantera blasting from the speakers as unwashed Marines, fresh out of the field, jacked steel with loud grunts, ripped utilities, and tight Marine green t-shirts. It was all free weights and no cardio. If you wanted cardio, you’d stuff a sandbag in your rucksack and stomp 2,000 vertical feet up the firebreak known as “the microwave” beginning just behind the gym.

I watched my battalion commander, a lieutenant colonel at the time, and now a two-star general, shout, “That’s it Marine!” to a bulldozer-sized lance corporal who happened to also be a former offensive lineman from Nebraska. With one booming exhale after another, the barrel-chested Cornhusker repped out 315 pounds on the bench press with power and grit. Right then, amid the clanging plates and deep roars of encouragement, I was proud to be a U.S. Marine.

I love this life lesson from my favorite bodybuilding memoir: “I vomit the most. That’s why my legs are the best.” For me, that quote ignites past images of Ricketts Hall. Home to the Naval Academy’s football team, workouts at Ricketts were so intense that strength coaches lined trash cans along the wall so exhausted players could puke. The 12,000-square foot gym was lined with 22 squat racks, 22 Olympic platforms, and a collection of dumbbells that went right up to 150 pounds each, plus the wall-shaking sound system that would make Motörhead’s Lemmy proud.

During my four years on the Navy football team, no off-season day was more intense than squat max day, known ominously as “Black Monday.” It went a little like this: The head strength and conditioning coach, an over caffeinated 6-foot, 5-inch dark-haired Viking nicknamed “Satan” would give each player a specific weight, typically anywhere from 300 to 450 pounds, and scream these instructions: “Men! Today is Black Monday. Your mission is to squat deep for rep after violent rep until you see black and then one more rep till you see green!”

On that note, we would load our bar with iron plates and rep the preassigned weight until utter failure. After grinding out the final repetition, like most guys, I’d still try one more rep to (a) “see green” and (b) show the devil himself, our coach, that I never quit. On that final effort, as I’d lower deep into my squat with a tight back, racing heartbeat, and quivering legs, the iron would always win, and my teammates would grab the weight before it crushed me and rack it. Nauseous and out of breath, I’d stumble to an awaiting trash can and do my thing. At that hardcore place and time, it all seemed perfectly normal.

Watching a no-neck manimal, in a scene right out of a comic book, get slapped across the face, step inside the squat cage, and get under 455 pounds with the bar bending across his meaty traps and rep nearly a quarter-ton for 18 mind-freaking times. From his first rep on, 40 muscle-bound psychos, all future commissioned naval officers, of course, crowded the cage, cheering with apocalyptic rage. It was like a scene from Thunderdome, raw and beautiful.

What do a bunch of bored jarheads cutting endless gator squares in the Arabian Sea do? Lift weights, swallow supplements, and get huge, of course. In the mighty USS Peleliu gym, just above the anchor room on the ship’s bow, Marines — otherwise stacked tight like Spartans in their berthing spaces below — found freedom from claustrophobic rage. The gym’s thick air was a toxic mix of body odor and JP-5 jet fuel, especially at night when the walk-through hatches on either side of the gym were sealed shut. And if you’ve ever lifted weights on a Navy ship, then you also know that to prevent rotator cuff injuries during rough seas, a lifter’s positive and negative rep rhythm has to match the ship’s pitch and roll. Fun stuff.

Two sailors behind a nightclub-inspired DJ booth with turntables spinning, speakers vibrating, and soundboards blinking, ignited our workouts into a party-rocking good time. It wasn’t exactly a night on the Las Vegas strip, but on a warship with nothing to do but eat, sleep, and lift, pushing through heavy leg day in a makeshift dance club cured my mid-deployment blues.

Every military gym is a slice of that base, unit, or ship’s warrior spirit. I’m fortunate to have felt that warrior spirit through great workouts with amazing people in so many hardcore military gyms across the country and around the world. That being said, in the comments section please share your own favorite iron memory on base, on ship, or in the war zone. Go heavy and don’t forget the trash cans!