These Tiny Robots Are Saving Lives In Combat

Consider for a moment that you’re a Marine or soldier patrolling through a combat zone when a series of pot... 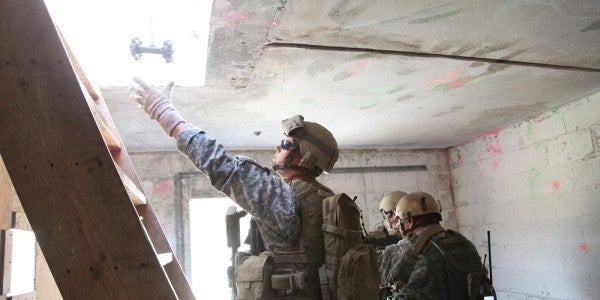 Consider for a moment that you’re a Marine or soldier patrolling through a combat zone when a series of pot shots ring out. Word comes down that the shooters may be in a nearby compound.

You reach in your pack, pull out a small tube with two wheels, and toss it toward the building. Next, you pull out a controller and guide it inside, watching the robot’s progress on a small screen. Within minutes of taking fire, you can see if there are armed combatants inside, how many, what they’re packing, and if there are civilians present. Now, you know what you’re up against in real time, not 30 minutes (or an hour) later when a drone finally makes its way to your airspace.

Fortunately, this isn’t a fantasy, the technology exists and it's being used for precisely this purpose.

ReconRobotics, a robotics manufacturer specializing in small, light-weight, multi-purpose robots, was founded to help small unit leaders make decisions in combat by providing them actionable information in real time. In 2001, the Defense Advanced Research Projects Agency, better known as DARPA, awarded a grant to a University of Minnesota engineering team to design technology that would offer frontline troops the ability to detect and respond to threats as they emerge.

“There was recognition that there needed to be ways to know: ‘Is that building over there full of bad guys, or is it cover we can run to?’” explained Andrew Drenner, the chief technology officer with ReconRobotics, in an interview with Task & Purpose. Drenner was part of the team at the University of Minnesota and in 2005, founded ReconRobotics alongside other researchers that worked on the initial project.

The robots come in a variety of builds, from the tiny Recon Scout, to the SearchStick, which is pretty much a tactical selfie stick. The newly released Throwbot, is basically an indestructible audio and video recorder with wheels — just toss it over the wall where the bad guys are and you can see and hear everything they’re doing. The average runtime for the robots on even ground is one hour, with a range of 300 feet outdoors, and 100 feet indoors.

Beyond providing much needed intelligence on the ground, the micro-robots are incredibly light, weighing in at around one or two pounds, water resistant, rugged, and they can see in the dark. With just a little creative thinking, the robots can be used for a wide variety of roles beyond their initial intention.

“They’re using it in plenty of the traditional ways, to throw it ahead and discover whether there’s any IEDs along the roadside or down in culverts, or they’ll tether the robot and toss it down pipes or down a well, or in a hole and find out if there’s a package waiting for them,” explained Mack Traynor ReconRobotics’ chief executive officer.

One of the key things Traynor and Drenner say they keep in mind when designing the robots is weight, and for good reason. American ground troops are already lugging heavy combat loads, so any additional weight means something else has to go.

“They’re already so over encumbered” explained Drenner. “I can easily build an 80-pound robot that can do a ton of different things for them, that’s not a problem, but they won’t carry that. They don't want to carry an eight-pound robot. Getting them to carry a one-pound robot, that still means they’re giving up ammunition or water, so that’s a decision: ‘What is this going to give me when I’m in the middle of a firefight? Is this going to be useful. What missions can I accomplish with this and how is it going to save me and the guys around me?’”

As the technology continues to progress, Drenner and Traynor believe mini-drones will become a common sight in frontline units.

“The drones are going to get smaller and they’re going to become more plentiful,” explained Drenner. “I don’t think it’s far off until every combat team or squad has several small systems with them at all times. I think that’s pretty much a given. … It’s going to take a combination of flying systems and ground systems to cover all aspects and to know what’s going on around them in the battlespace.”

ReconRobotics has sold over 5,000 drones, which are used in 45 countries by the military as well as by county, state, and federal law enforcement agencies in the United States.

“They are being used every day,” said Drenner. “Every day somebody is using one of our robots to help them make a better decision about the situation they’re in.”