DHS Secretary John Kelly To Lawmakers: Change The Laws Or ‘Shut Up’

Secretary of Homeland Security John F. Kelly got real candid during a public speech in which he described the international... 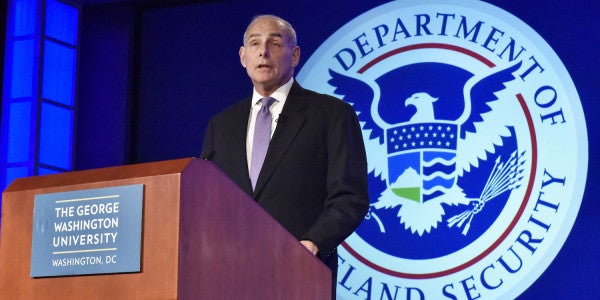 Secretary of Homeland Security John F. Kelly got real candid during a public speech in which he described the international and domestic threats facing the United States. He also went on the offensive, going after politicians who have criticized the actions of DHS.

“If lawmakers do not like the laws they’ve passed and we are charged to enforce—then they should have the courage and skill to change the laws,” the retired Marine general said in his remarks on April 18 at George Washington University Center for Cyber and Homeland Security.

“Otherwise they should shut up and support the men and women on the front lines,” he added.

His comment telling lawmakers to “shut up” was met with a room full of applause.

Kelly and DHS have received intense public criticism since President Donald Trump introduced an executive order to ban Muslims from entering the United States from specific countries in February. While that order has since been ruled unlawful, DHS has also been scrutinized for the perceived increase in deportations of unauthorized immigrants around the country.

“People who illegally cross our borders do not respect the laws of our nation,” Kelly said. “We want to get the law breakers off our streets, and out of the country, for the good of our communities.”

Kelly claimed Customs and Border Protection has actually saved lives in recent years, rescuing nearly 4,000 people who were lost in the desert trying to cross the border in fiscal year 2016.

Kelly also devoted his speaking time to defend his employees: “For too long, the men and women of my department have been political pawns,” he said. “My people have been discouraged from doing their jobs for nearly a decade, disabled by pointless bureaucracy and political meddling, and suffered disrespect and contempt by public officials who have no idea what it means to serve.’’

Kelly added that everything changed on Jan. 20 when he took office and empowered his employees to start doing “the jobs they were hired and trained to do, and recognize them for doing it.”

Addressing the major threats facing the country, Kelly highlighted “failed states, cyber-terrorists, vicious smugglers, and sadistic radicals” as well as the drug trade that plagues the U.S.-Mexico border. More specifically, Kelly indicated a potential crackdown on marijuana trafficking in the near future, referring to it as a “potentially dangerous gateway drug,” and making it clear that DHS will continue to prosecute the use, possession, and trade of marijuana until it is no longer illegal under federal law.

Kelly closed his remarks with an ominous message: “We live in a dangerous world, ladies and gentlemen. Those dangers are increasing, not decreasing, and changing speed and direction every single day.”