The Wisconsin National Guard is considering taking action against a congressman currently deployed with his Air National Guard unit for blasting the governor's decision to withdraw troops U.S.-Mexico border. 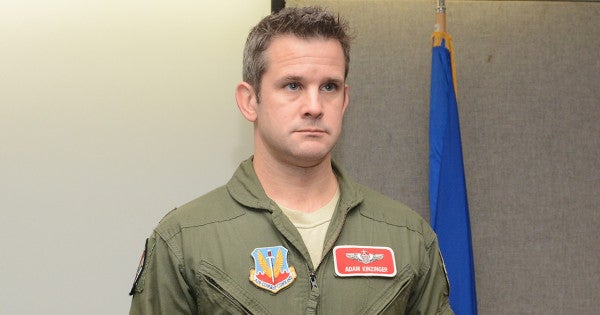 The Wisconsin National Guard is considering taking action against a congressman currently deployed with his Air National Guard unit for blasting the governor's decision to withdraw troops U.S.-Mexico border.

Rep. Adam Kinzinger, a Republican congressman from Illinois and lieutenant colonel with the Wisconsin Air National Guard, tore into Wisconsin Gov. Tony Evers' decision on Monday to join several other states in withdrawing National Guard troops from the southwest.

.@GovEvers, your guardsmen saved many lives and protected our country on this mission. Did you go visit them on the border to see for yourself? Or did you make your decision based solely on politics?

I’m grateful to my fellow Wisconsin Guard members, and I’m deeply disappointed you won’t let them do what they are trained to do for the good of the country. @GovEvers, I hope you’ll reconsider.

Kinzinger is a Republican. Evers is a Democrat. But all that really matters is that Gov. Evers is the commander-in-chief of the Wisconsin National Guard, which means Kinzinger technically dissed a commanding officer.

When the Associated Press asked the National Guard if Kinzinger might be disciplined for his comments, spokesman Capt. Joe Travato responded that both the Guard and Evers' office “are looking into the matter.”

A Kinzinger's spokeswoman told the AP that the Wisconsin statutes only apply to members while “on service.”

Kinzinger had previously flown RC-26s for surveillance and reconnaissance missions and invoked his military service to justify his support for President Donald Trump's efforts to construct a border wall on the U.S.-Mexico border.

“As a member of the Air National Guard, I work with Customs and Border Protection officers on our southwest border and know firsthand how an unsecure border jeopardizes the security of our country” his website says.

SEE ALSO: A Sitting Congressman Has Been Deployed To The US-Mexico Border