The number of National Guard personnel who have been mobilized to respond to civil unrest tripled from 5,000 to more than 17,000 in just one day 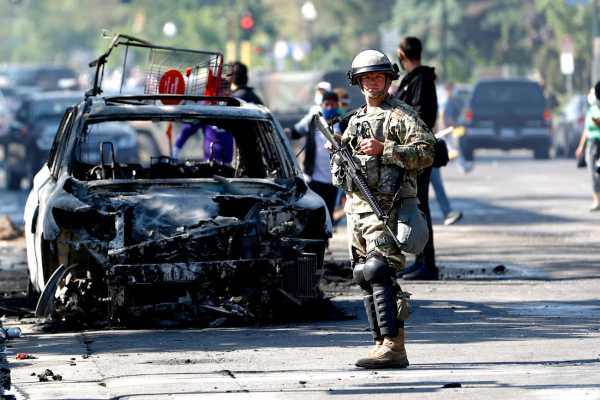 The number of National Guard personnel who have been mobilized to assist law enforcement officers and respond to civil unrest has increased dramatically in just one day.

On Sunday, the National Guard Bureau announced that 5,000 soldiers and airmen with the Guard were being activated in 15 states and the District of Columbia.

By Monday, that number had increased to more than 17,000, with guardsmen mobilized to support law enforcement personnel in 23 states and the District of Columbia.

The mobilization of more than 17,000 National Guardsmen places the total number of mobilized personnel at 66,700 — historic levels not seen since Hurricane Katrina in 2005, which peaked at 51,000.

The bulk of the National Guard members who have been mobilized, some 45,000, are assigned to novel coronavirus (COVID-19) relief in all 50 states, three territories, and D.C.

When asked if any National Guardsmen were pulled off of the coronavirus relief mission to assist with civil unrest, National Guard Bureau spokesman Wayne Hall told Task & Purpose that “to the best of my knowledge, no state has pulled resources from COVID response to support domestic disturbance response.”

Cities across the country have faced days of civil unrest over the death of George Floyd, an unarmed black man who died after a white police officer in Minneapolis, Minnesota knelt on his neck during an arrest on May 25.

Predominantly peaceful daytime protests have, in some areas, turned violent and chaotic at night, leading to injuries, looting, vandalism, and the destruction of property.

On Monday, the Lexington Herald Leader reported that a man was shot and killed in Louisville, Kentucky, following an exchange of gunfire with police and members of the National Guard there.

RELATED: One dead in Louisville after shooting involving police and National Guard amid protests

According to a June 1 press release from the National Guard Bureau, “in all cases, state and local law enforcement agencies remain responsible for security.”

Guard personnel are tasked with a variety of roles depending on where they are assigned, and how they're used by local law enforcement, from providing general support to officers, to transportation and communication support, and to assisting with extinguishing fires.

As a uniformed member of America's military, it breaks my heart to see the country I love in such pain. Your National Guard is here to help, and we will stay as long as we are needed. (1/4)

However, it remains unclear exactly what that training entails, and how National Guard members are being used in each of the 23 states and Washington, D.C., where they've been mobilized.

“We don't go into specifics of how many guardsmen in each state are activated,” Hall told Task & Purpose. “The mission sets vary state to state and are based on the direction of the governor of each state.”

How National Guard members are armed and equipped also varies by state.

In Washington, D.C., where the district's entire National Guard has been activated, they are unarmed but equipped with riot gear, according to Military Times.

As of Sunday, Colorado National Guardsmen were armed only with “defensive weapons” like batons, according to Air Force Maj. Gen. Michael A. Loh, the state's adjutant general for the National Guard.

“The Denver police chief said that ‘if we have to use deadly force, I want my police officers to do it and I want you to be in support,'” Loh told reporters during a May 31 press conference.

In Georgia, guardsmen are permitted to carry pistols, with the state's adjutant general, Maj. Gen. Thomas Carden, saying that “we can’t envision a situation, especially here in Atlanta, where we would need a rifle, if you will. We don’t engage a threat from that far out.”

And in Minnesota, where the riots first began, guardsmen are armed with rifles, but their ammunition is stored in magazine pouches on their body armor, the state's adjutant general, Army Maj. Gen. Jon Jensen, told reporters on Sunday.

Jensen said that the state's guardsmen are authorized to use proportional force in response to threats, and that they were armed because the FBI contacted the Minnesota Guard with a “credible, lethal threat directed against the Minnesota National Guard.”