No, The White House Can’t Actually Order The Guard To Sweep Up Immigrants

Fridays are always exciting in the world of American politics, as agencies dump the most salacious news on the press... 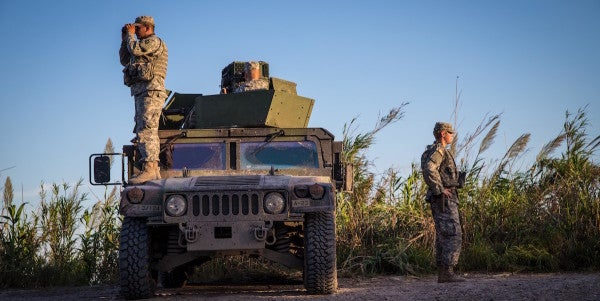 Fridays are always exciting in the world of American politics, as agencies dump the most salacious news on the press corps right before the weekend. This Friday was no different, as the Associated Press reported that the Trump administration is considering a plan to mobilize over 100,000 National Guardsmen to tackle illegal immigration, largely in 11 states far removed from the southern border.

BREAKING: Trump administration considers mobilizing as many as 100,000 National Guard troops to round up unauthorized immigrants.

The plan is laid out in an 11-page draft memo written by Homeland Security Secretary John Kelly and obtained by the AP and proposes mobilization efforts in California, Arizona, New Mexico, Texas, Oregon, Nevada, Utah, Colorado, Oklahoma, Arkansas and Louisiana. Almost one-half of the 11.1 million unauthorized people in the United States reside across these 11 states, according to Pew Research Center.

While the White House has already denied the report — ''There is no effort at all to utilize the National Guard to round up unauthorized immigrants,” White House Press Secretary Sean Spicer said Friday — it’s important to understand how a plan like this could even legally be put into effect — if at all.

Specifically, we need to understand the unique legal status of the National Guard, which can be both a federal and state force thanks to a series of military forms championed by Secretary of War Elihu Root in the early 20th century.

The National Guard operates under two legal statues of the U.S. Code: Title 32 and Title 10. Generally speaking, the federal government is responsible for training and equipping the National Guard with federal tax dollars while the Guard operates under the direct control of the state governor — Title 32 authority. However, during national emergencies, the president of the United States may place elements of the National Guard under federal control; otherwise known as Title 10 authority, the same legal status as the active duty and reserve of the armed forces.

Here is the full 11-page draft memo about using the National Guard for deportations https://t.co/5HjDV4gcRp pic.twitter.com/jP6hF5fDia

Legal statuses matter when dealing with domestic unrest. Under Title 32 authority, the National Guard can operate in a law-enforcement capacity. Under Title 10 authority, however, the National Guard is restricted by the Posse Comitatus Act, a law which generally prevents federal military forces from participating in law enforcement (although there are certain exceptions).

Kelly’s proposal, as reported by the Associated Press, keeps the National Guard under Title 32 authority, leaving the states to decide whether to participate.

That places President Donald Trump in a catch-22 situation. He could federalize the National Guard, but in doing so, he couldn’t use them to enforce the law. The National Guard could enforce the law, but in doing so, they would have to remain under the control of the state governors, not the President. Indeed, as written, the new proposal wouldn’t do anything illegal because it wouldn’t do much at all, save for bolstering local law enforcement if and when the states see fit.