Look, I only spent two years at the United States Naval Academy, but a lot of lessons stuck with me.... 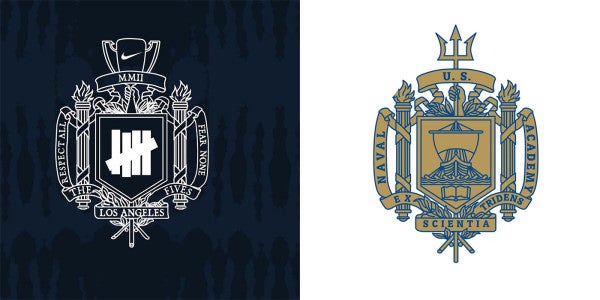 Look, I only spent two years at the United States Naval Academy, but a lot of lessons stuck with me. Like that whole “Honor Concept” thing, which says midshipmen do not lie, cheat or steal: They “ensure that work submitted as their own is their own, and that assistance received from any source is authorized and properly documented,” and they “respect the property of others and ensure that others are able to benefit from the use of their own property.”

But when it comes to cheatin' and stealin', Nike apparently holds true to its own credo: “Just do it.”

That's about all I can say regarding the megalithic apparel hawker's new t-shirt collab with Los Angeles-based shoe company Undefeated, which rolled out this attempt at a regal streetcore logo on Monday:

If you're a big fan of brands getting scorched in social media replies, then you'll love the thread under that tweet, where alumni and supporters of Canoe U. immediately smelled a rat:

Needless to say, reporter Danielle Ohl from Annapolis's hometown newspaper was on it:

Hello, I am a reporter for The Capital in Annapolis, Maryland. I am writing a story about this logo and its similarity to the U.S. Naval Academy seal. I have some questions about the logo and would love to talk to someone at Undefeated. My email is dohl@capgaznews.com. Thanks!

“Similarity” is a polite way of saying what's pretty obvious: Nike & Undefeated snatched the Naval Academy's very recognizable seal and jammed a swoosh on it.

The one thing we don't know is: why? Perhaps Oregon's favorite running-shoe giant is still butthurt from losing their USNA football-jersey contract to Maryland-based Under Armour. (I sympathize, as Under Armour's designs are cornily jingoistic and ugly as hell.)

But whatever the reasons, the appropriation is clear. And the nautical school on the Severn is likely to be as protective as any military agency is of its trademarked logos.

USNA told Ohl that its staff is “studying” the similarity with Nike's “new” design, and “a representative for Under Armour, the top Nike competitor and apparel provider for Naval Academy sports teams, said their legal team is reviewing the use.” But that Under Armour rep “deferred to the academy, as the seal is not an Under Armour trademark.” (Ohl didn't specify whether the Under Armour rep was doing a dance at Nike's self-own during the interview.)

Nike never got back to Ohl; we'll reach out, too, today, and see if we get a response on their act of piracy against Navy.

Say, that makes me wonder: Who makes Army's jerseys?

It's all a conspiracy, man.