Jesse Iwuji didn’t just pass by. He didn’t rubberneck or gawk. When he saw a family on the side of... 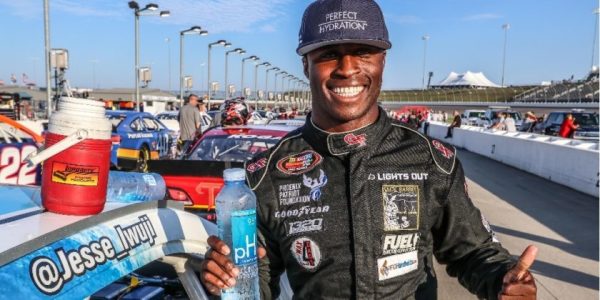 Jesse Iwuji didn’t just pass by. He didn’t rubberneck or gawk. When he saw a family on the side of the road, and their minivan on fire, he immediately lept into action.

And just in the nick of time:

On June 24, Iwuji was on his way home from work — which for him meant a six-hour drive back from the Sonoma Raceway in California after a day of high-speed left-turns as a NASCAR driver — when he saw the stranded vehicle and a family of four, including two small children, on the side of a highway. A small fire was burning underneath as fluid dripped from the van's undercarriage.

“I saw that a pretty bad situation was about to erupt pretty quick,” Iwuji told Task & Purpose by phone.

After pulling onto the shoulder of the road, Iwuji’s training in his other job, as a lieutenant and surface warfare officer in the Navy Reserves, came into play. “We’re always taught: ship, shipmate, self,” he told T&P.;

“It just becomes second nature,” the 30-year-old Naval Academy graduate explained in an interview with NASCAR. “I’ve noticed any time there’s ever any situation on the side of the road that could be a dangerous situation, I don’t even have to think twice. I just stop and see what I can do to help. I just try to do my part.”

Related: Jesse Iwuji Leads A Double Life As A Naval Officer And A NASCAR Driver »

Knowing how quickly a small burn can go from bad to worse, Iwuji approached the family, and after a failed attempt to push the vehicle away from the fire underneath, he ushered them a safe distance away — though it took some haranguing to convince them to leave their belongings, he told NASCAR.

Moments later, the car was a fiery wreck as the blaze spread from the engine to the front seats, before engulfing the back and setting off the fuel cell.

Related: Meet The Navy Reservist Going The Distance At NASCAR In Daytona »

While Iwuji’s intervention was critical, it belied a more unsettling concern: If he hadn’t stopped, would anyone else have? Hopefully the answer is yes, and there are scores of videos and accounts of Good Samaritans doing just that to back that hope up.

Ultimately, Iwuji said that’s what he hopes people will take away from the incident: Not that someone else will come along, but that you can.

“At the end of the day it’s about doing the right thing when you see people in need,” Iwuji posted on Twitter on June 27. “Anyone could have stopped like I did and helped, I’m no one extraordinary, just decided to do the right thing.”