Jesse Iwuji is a badass, but you’d never guess it just by talking to him. During the week, the humble... 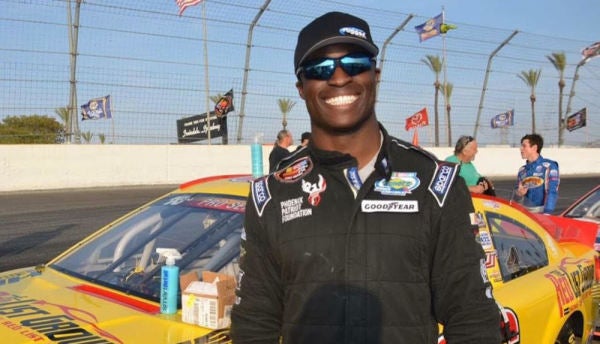 Jesse Iwuji is a badass, but you’d never guess it just by talking to him. During the week, the humble Naval lieutenant spends his nine to five as a surface warfare officer, but on the weekends, he moonlights at a second job. But it’s not like some low-key side gig waiting tables or cashiering. Instead, he’s out kicking ass as a driver for NASCAR.

Iwuji grew up in Dallas, Texas, born to Nigerian immigrant parents who pushed him to excel at everything he does.

“I’ve liked cars since I was little,” he told Task & Purpose. “As a kid I used to watch Knight Rider. There’s the car, Kit, and he talks and does all this crazy stuff, so that’s really what got me into cars.”

As he got older, Iwuji got into the Fast & Furious movies, and he kept up with racing and cars. But his athleticism in high school led him in a different direction than the racetrack — to the U.S. Naval Academy as a safety for its football team.

But racing was always on his radar. And while he was still a Midshipman he took his Chrysler 300 out to a drag race in Crofton, Maryland, just for fun. But once he graduated and got his commission in 2010, he bought a Dodge Challenger SRT8.

For a year, he practiced, worked on the car, and served as a football coach at the Naval Academy Preparatory School in Newport, Rhode Island. Then, he get orders to go to California.

In 2014, Iwuji participated in the Mojave Mile speed trial in Southern California. In preparing, he upgraded the Challenger's engine to 1,100 horsepower and got the car to run up to 200.9 miles per hour during the race. It was after becoming only the fifth motor parts driver to do it in the race’s history that NASCAR approached him.

“NASCAR was the first door that opened up for me, and I ran with it,” he said. “I haven’t looked back since.”

Now, he races stock cars in its K & N series, which is essentially NASCAR’s version of a minor league. But Iwuji is still active duty and has served to deployments to the Arabian Gulf since commission in 2010.

“I basically have no life outside of this,” he joked. “It’s hard to balance. Every once in awhile I have to take some leave, I like doing the whole military-racecar-driver thing.”

For Iwuji, being in the Navy and racing on the weekends isn’t easy, but he takes it in stride.

“There’s a lot of correlation between the military and racing,” he said. “The biggest thing is both of them can pretty much be looked at as team sports.”

And his Navy superiors are very supportive of his racing career. As a result, though a rookie mostly racing on weekends in 2016, Iwuji managed to finish in the top 10 overall in points for the season out of 59 drivers in the NASCAR K&N; Pro Series West.

In 2017, his active duty career will come to an end, and he will be putting his full efforts into become a world-class driver.

“My big thing now is to continue to train, get better, get faster, get more experience, and bring on board more sponsors,” he said.