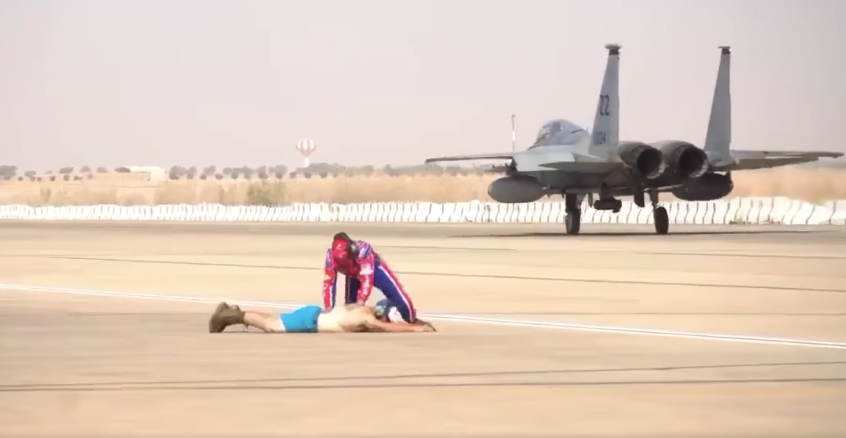 This article has been updated to include quotes from Airman 1st Class Josh Logan and Senior Airman Ricky Flagg, the masterminds of the operation.

The Air Force will have to add “shake ‘n’ bake” to its list of core values, because two enterprising airmen acted out a hilarious scene from the beloved comedy Talladega Nights: The Ballad of Ricky Bobby on the flight line at Prince Sultan Air Base in Saudi Arabia this summer.

In a clip posted to the popular Air Force amn/nco/snco Facebook page on Wednesday, an airman dressed in an Old Spice NASCAR driver’s outfit directs a F-15C Eagle assigned to the 18th Wing taxiing on the flight line at Prince Sultan.

Within moments, another airman wearing just skivvies and boots leaps out from behind a floodlight cart and prances around the first airman before Old Spice tackles him to the ground. Old Spice pats down the half-naked airman a bit before returning to his F-15 duties.

“Ah, that’s f**king hilarious,” a voice off-camera says as the jet taxis by, and boy are they right about that. The clip evokes the famous scene from Talladega Nights where Will Ferrell, playing the titular down-and-out NASCAR driver, strips half-naked and runs in circles around his totaled stock car, waving his arms and screaming he’s on fire.

John C. Reilly, playing a fellow NASCAR driver racing for Old Spice, then sprints to Bobby’s aid and tries his best to put out the imaginary fire.

Airman 1st Class Josh Logan reached out to Task & Purpose to take credit for the outstanding sketch. Logan explained that his buddy Senior Airman Ricky Flagg’s birthday was coming up, and since his first name is Ricky and he loves quoting movies, it made perfect sense to buy some Talladega Nights costumes and do a Ricky Bobby scene for freestyle Friday.

What is freestyle Friday? Logan explained that it is a weekly tradition where the flight line airmen dress up or put on silly antics for the pilots, just to add some fun to the day-to-day of line operations.

“Originally he was going to do it in just underwear but I was like ‘maybe we should do it with just a few clothes on buddy,’” Logan recalled telling Flagg, who dressed as Ricky for the occasion. Logan meanwhile dressed as John C. Reilly’s character, Cal Naughton, Jr.

One thing I don’t envy Flagg: lying out on the pavement under the Saudi Arabian sun in August.

“It was about 113 degrees outside when we launched so I’d assume the ground was even hotter,” Logan said.

Several Facebook commenters wondered if the airmen got in trouble for the sketch. But unit leadership was cool about it, Logan said. In fact, several of them came out to watch it go down.

“Magic Man and Diablo … awesome!” wrote Col. Bill Ray, commander of the 18th Maintenance Group, in a comment on Facebook.

Logan and Flagg are both crew chiefs assigned to the Kadena-based 67th Aircraft Maintenance Unit, but they had the honor of going with the 44th Expeditionary Fighter Squadron and 44th Aircraft Maintenance Unit to Prince Sultan Air Base this past August, Logan explained. The units were there to provide “deterrence against hostile actions in the region,” the Air Force wrote in an August press release.

Bravo airmen, and keep up the good work!