Socrates the Military Analyst? What He Thought Made an Effective General

I knew that Socrates had been a soldier, and had a distinguished record in combat in the Peloponnesian War. But... 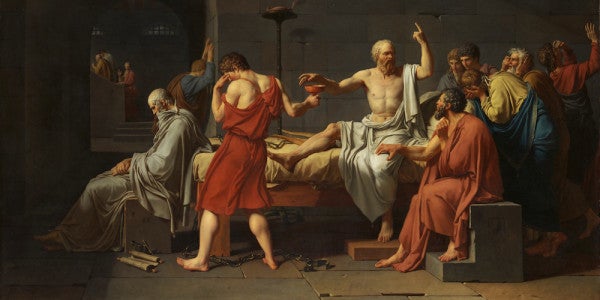 I knew that Socrates had been a soldier, and had a distinguished record in combat in the Peloponnesian War. But I didn’t realize that in the works of Xenophon he actually does some military analysis, particularly in describing the attributes of a good general.

Tactics, he states in Xenophon’s Memorabilia, are “only a small part of generalship.” Like a true professional, Socrates notes that logistics are key. “A general must also be capable of furnishing military equipment and providing supplies for the men.” On top of that, he adds, “he must be resourceful, active, careful, hardy and quick-witted; he must be both gentle and brutal, at once straightforward and designing.”

In Oeconomicus, Xenophon adds that the best general is

. . . not the sturdiest soldier, not the best with bow and javelin, not the man who rides the best horse and is foremost in facing danger, not the ideal of horseman or marksman, but the leader who can make his soldiers feel that they are bound to follow him through fire and in any risky situation.