On his way to the ball, a Marine used his belt as a tourniquet to save a motorist’s life

"There’s no Marines Hymn playing in the background as you run across the road; you just do something.” 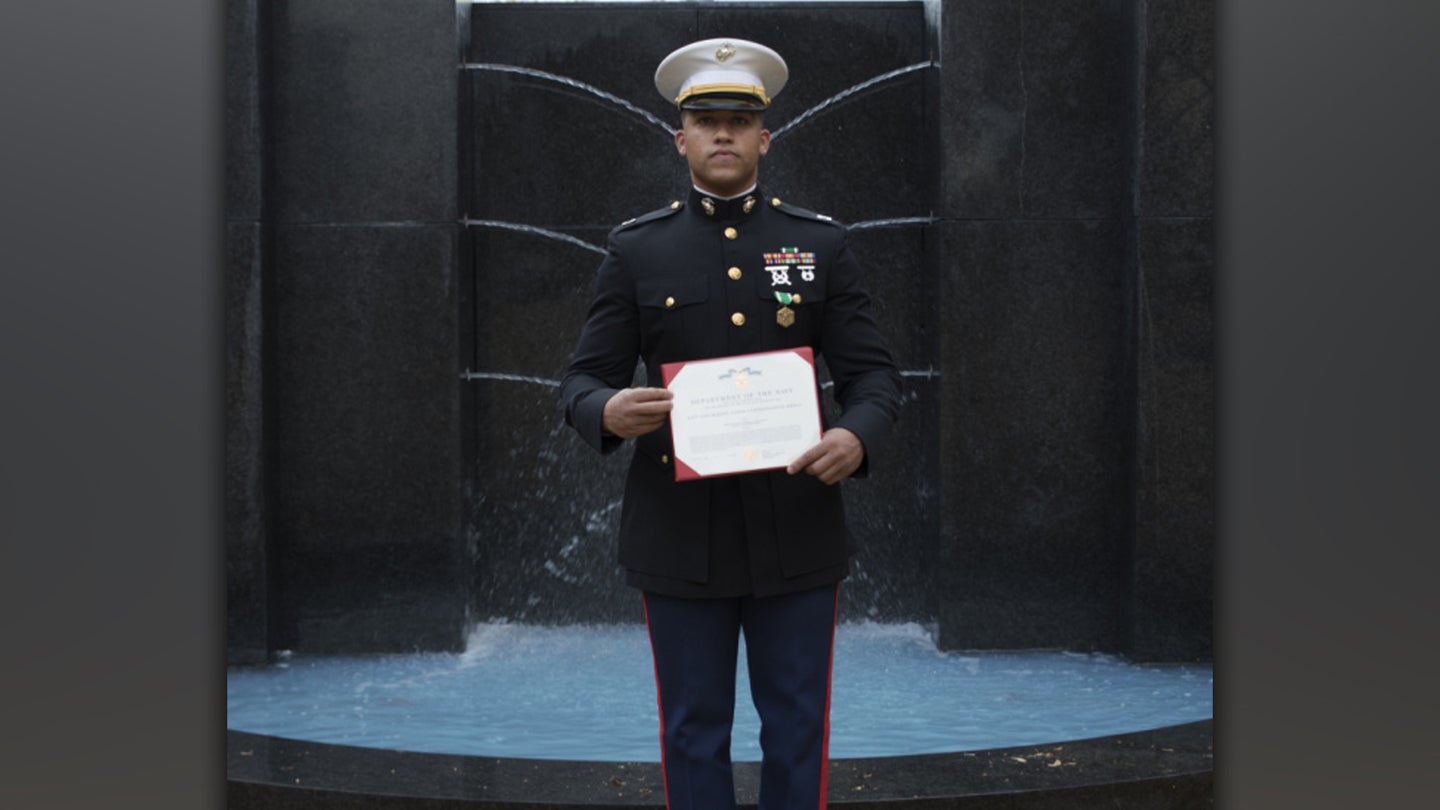 A Marine’s quick thinking meant the difference between life and death for a motorist on an isolated desert road in California last year. Capt. Stephen Alexander, the executive officer for the Marines’ recruiting station in Dallas, was driving through Elora, California on his way to the Marine Corps ball to celebrate the service’s 245th birthday when a vehicle going the other way lost control and flipped onto its side.

“Once the vehicle came to a final stop, I pulled over immediately,” Alexander said in a press release. The Marine was awarded a Navy and Marine Corps Commendation Medal in a ceremony in Texas on Dec. 11.

“There was a vehicle in front of me that also pulled over with [3rd Battalion, 4th Marine Regiment] Marines,” said Alexander, who at the time of the incident was a first lieutenant with 3/4 stationed in California. “I’d never met them before; they were from a different company. We all ran over to the vehicle; at this point the vehicle was on its side and the driver was at the bottom and not coherent.”

The driver was unconscious and critically injured, and the Marines could not open any of the car doors due to the vehicle damage from the crash. Undeterred, one Marine broke through the back window while Alexander smashed through the windshield so that he could start applying trauma care.

“Once they smashed in the window I hopped in and started treating as many injuries as I could find,” Alexander said. “Every once and a while the driver would come back to consciousness and say he couldn’t breathe.”

There was no cell service in that part of the desert, and the nearest ranger station was about an hour away. The Marines would have to make do until help arrived. Alexander found that the driver’s leg was partially severed, so he used belts as tourniquets to stop the bleeding before another Marine provided an actual tourniquet.

“We came to Vegas with our dress blues, not tourniquets or our emergency field kits,” Alexander said. “Had the other Marines not been there, there’s no way I could have acquired the things needed to treat him. I would have tried my best, but there’s not a whole lot I could have done once I got in the vehicle had they not continued to provide whatever resources they could find.”

After about an hour, park rangers arrived, followed by a nurse who took over treatment for the driver. The nurse found that the driver also had a punctured lung which was causing his shortness in breath. After about two hours, a helicopter arrived to take the driver, but it couldn’t find a place to land. Luckily, an ambulance came by, at about the same time and Alexander moved the driver into it so he could get to a hospital.

A former infantry officer, Alexander had been trained for this sort of situation. But in the end, he said no amount of training can fully prepare you for the real thing.

“I think reacting to something like that, you either do or you don’t,” said Alexander. “There’s no Marines Hymn playing in the background as you run across the road; you just do something.”

Alexander himself suffered a traumatic brain injury which could have killed him just four months prior to the car accident. He never expected he would wind up treating a driver suffering the same injuries, he said in the release. Though he never found out what happened to the driver, the quick actions of Alexander and the other Marines deserve praise.

“I think Capt. Alexander’s actions that day were absolutely incredible,” said Major Micheal Dorsey, Commanding Officer, Recruiting Station Dallas, 8th Marine Corps District, Western Recruiting Region. “We expect our Marines, 24/7 on and off duty, to uphold our core values and he displayed those values that day. The action that he took as well as the other Marines that day, takes a lot of courage.”

Related: We salute the Marine who rushed to aid an injured police officer after a motorcycle wreck

Correction: The original version of this article mentioned the 244th birthday. It has been updated to reflect the 245th.