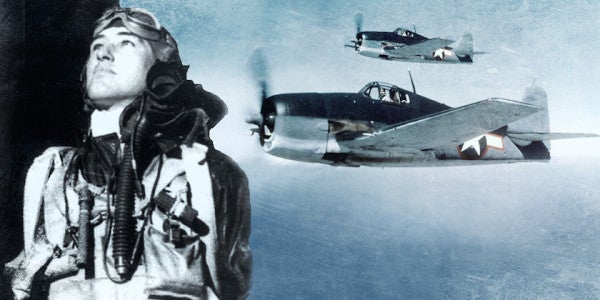 On April 19, 1944, Fred “Buck” Dungan, a naval F6F Hellcat pilot, chased a Japanese Mitsubishi G4M “Betty” Bomber down to 2,000 feet and destroyed it. The sole survivor was captured and brought to the USS Yorktown, upon which Dungan was stationed. The prisoner requested to meet his would-be killer, and — in accordance with the samurai code — congratulated him on his victory, which happened to be Dungan’s first as an aviator in World War II. He was just getting started.

Retired Navy Lt. Cmdr. Dungan passed away Tuesday, Jan. 2, in San Clemente, California. At 96, he was one of the last of a dying breed: the fighter ace. His five-man unit of Hellcat night fighters was credited with downing a total of 27 Japanese planes in 1944, and was awarded the Presidential Unit Citation. Dungan alone shot down seven of those planes, exceeding the unofficial requirement for ace status.

Dungan, who was born on July 27, 1921, in Los Angeles, liked to say he had two birthdays. The other was July 4. Around 3 a.m. that day in 1944, he and another Hellcat pilot launched from the USS Hornet to bomb a fortified Japanese-held island in the Pacific. But they never made it to their destination. Instead, they found themselves in a vicious dogfight with a formation of 10 Japanese Rufe floatplanes.

By the time the battle was over, Dungan had downed four Japanese aircraft — the last one in a head-on firing match. His partner downed three. They had also managed to sink a Japanese destroyer, all while taking fire from an anti-aircraft battery. When the duo finally landed back on the USS Hornet, Dungan was barely conscious and bleeding profusely from the neck. He had been hit by a .30-caliber round. The wound was his ticket out of the war.

Dungan returned home from World War II in 1944 with the Navy Cross, a Purple Heart, and the Distinguished Flying Cross. And that was after he’d already made history by participating in the first ever ground-controlled-approach “blind” landing to a stop as the member of a top secret night-fighter development program. In August 1945, after a stint instructing young pilots at the Night Aircraft Training Unit at Quonset Point, Rhode Island, Dungan left active duty and joined the Naval Reserve. He was 24.

Dungan’s commitment to naval aviation persisted well after he retired from the Navy in 1963. In 2009, he was inducted into the Golden Eagles, an elite flying fraternity of naval aviation pioneers that has counted the likes of Wally Schirra and Neil Armstrong as members. Several years later, at the age of 92, Dungan joined President Barack Obama in the Oval and accepted the Congressional Gold Medal on behalf of the American Fighter Aces Association.

When asked by a reporter how it felt to receive such a prestigious award from the president, Dungan said, “ slows me down and lets me appreciate that has happened in the past. I’ve had a wonderful life.” He sure did.