June 4 marks the 74th anniversary of the Battle of Midway, the greatest naval battle in American history and the... 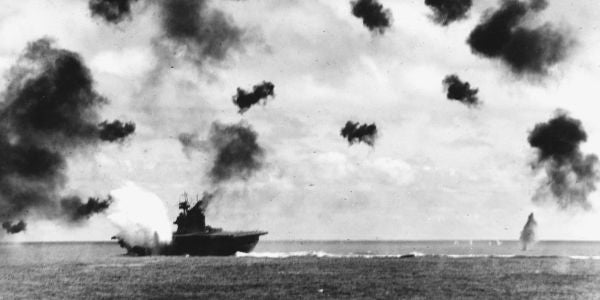 June 4 marks the 74th anniversary of the Battle of Midway, the greatest naval battle in American history and the turning point of World War II in the Pacific. Midway is without equal for significance and drama. Its lessons for war planning, war fighting, and war winning are as applicable today as they were in 1942. At Midway, a superior Japanese fleet was surprised and defeated by smaller, less combat-experienced U.S. naval forces. The U.S. victory ensured the Japanese would never again conduct effective large-scale, offensive naval operations during the war. It was a victory enabled by superb intelligence, advanced by sound decision-making and assured by the skill, courage, and sacrifice of those who sailed and flew in harm’s way.

At the outbreak of World War II the Japanese Navy seemed unstoppable. Led by Adm. Isoroku Yamamoto, with task force commanders like Adm. ChūichiNagumo, who spearheaded the Pearl Harbor attack, its successes spanned one-third of the globe from Hawaii to Ceylon. U.S. military forces were down following the attack at Pearl Harbor and surrender in the Philippines, but demonstrated they were not out when Lt. Col. James Doolittle’s B-25 bombers conducted a daring raid on Tokyo in April 1942. Surprised and embarrassed by the raid, Yamamoto erroneously reasoned Doolittle flew from the United States stronghold of Midway, 1,500 miles west of Hawaii. He never considered the raid was actually launched from the USS Hornet. Yamamoto wanted to attack and occupy Midway, believing these actions would lure the U.S. Pacific Fleet and its aircraft carriers for a decisive engagement. Once the U.S. fleet was exposed, Yamamoto’s kido butai, or mobile striking force consisting of four aircraft carriers, would spring its trap to defeat the Americans and maintain Japanese maritime superiority. By comparison, the United States had only three carriers in the central Pacific in the spring of 1942: Yorktown, Enterprise, and Hornet.

What provided the United States a strategic advantage at Midway was superior intelligence derived from decrypting parts of the Japanese navy’s code. Code-breaking is fragmentary, painstaking labor, especially without high computing power. It took an elite team of specialists months of work around the clock to fuse these signals with other sources of information and prepare them in a timely, relevant product for their commander. The leaders of this team of professionals were Cmdr. Joseph Rochefort — the officer in charge of station HYPO, a communications center packed with cryptologists, linguists, translators, and all source intelligence analysts, in the basement of a Pearl Harbor headquarters building — and Cmdr. Edwin Layton, Adm. Chester Nimitz’s director of intelligence. Rochefort and Layton first met in 1929 en route Tokyo to study Japanese language, beginning a lifelong professional admiration and friendship. The two reunited in Hawaii in 1940 where they employed their deep cultural and linguistic understanding of the enemy to maximum advantage. Their effectiveness working together is still considered the gold standard of professional teamwork by modern day intelligence officers and cryptologists.

Also on Layton’s staff was Lt. Jasper Holmes, who devised a plan to pass false information on a radio broadcast announcing Midway was having trouble distilling water as a ruse to confirm a vital information gap. The belief that the Japanese were referring to Midway as “AF” was confirmed when a subsequent Japanese transmission relayed, “AF is short on water.”

Nimitz, then-U.S. Pacific Fleet commander, placed full trust in his intelligence team following its accurate predictions of Japanese actions at the Battle of the Coral Sea the month prior. When pressed for specifics on current Japanese intent, Layton declared that the attack would occur on the morning of June 4 from the northwest on a bearing of 325 degrees, 175 miles from Midway at 0600. Nimitz directed his Midway task force commanders to employ their limited forces to inflict maximum damage on the Japanese fleet based upon this intelligence estimate and delegated specific battle plans to them. “The whole course of the war in the Pacific may hinge on the next 2-3 days,” declared an anxious Nimitz as battle approached. At dawn on June 4, U.S. scout planes located the Japanese fleet, after which Nimitz drolly remarked to his N2, “Well you were only five miles, five degrees and five minutes off!”

Initial air strikes by Midway-based Navy, Marine Corps and U.S. Army Air Force planes against Japanese ships were unsuccessful and at great cost, but significantly disrupted Japanese decision-making and operations. Torpedo planes were the first carrier-based aircraft to make runs at four Japanese carriers. Despite their magnificent devotion to mission, none of their weapons impacted a Japanese ship. However, they likely diverted Japanese defenses just in time for dozens of U.S. carrier-based dive-bombers to arrive when the Japanese carriers were most vulnerable while refueling and rearming their planes. Within the span of several minutes, American bombs tore into the flight decks, superstructures, and hangar bays of the four Japanese carriers and all were eventually sunk with 322 aircraft and over five thousand sailors. By comparison, the U.S. only lost one aircraft carrier: Yorktown.

After Midway, the Japanese lost their aura of invincibility and the ability to effectively maintain the offensive. Victory at Midway enabled President Franklin D. Roosevelt to focus on his grand strategy of “Europe First” knowing that the tide had turned in the Pacific.

Japanese heavy cruiser Mikuma, photographed from a USS Enterprise (CV-6) SBD aircraft during the Battle of Midway, after she had been bombed by planes from Enterprise and USS Hornet (CV-8).U.S. Navy photo

There were many random events and miscues that occurred during Midway that some historians attribute to luck. However, such occurrences are commonplace in battle. What cannot be attributed to luck — when preparation met opportunity — was the tireless effort to break Japanese code and deliver operational intelligence, or Nimitz’s absolute trust in his subordinates and delegation of authority to task force commanders, and the incredible heroism displayed by American sailors and airmen in the face of withering fire. These are lessons worth remembering today. Rochefort left a legacy to his successors with this simple axiom, “An intelligence officer has one task, one job, one mission. This is to tell his commander, today, what the is going to do tomorrow.” In modern parlance that is termed “battlespace awareness,” which along with “assured command and control,” and “integrated fires,” form the pillars of today’s Navy’s information warfare efforts. The axiom is as true in today’s combustible security environment as it was in 1942 during a world war.

Midway is commemorated annually by the U.S. Navy, but often overlooked by the American public due to the lack of familiarity with Midway’s remote location and its anniversary nearly coinciding with D-Day in Europe on June 6. While Midway is a staple at Navy and World War II museums, surprisingly there are only three small official government monuments honoring the valor of those who participated in this history-changing event: Chicago, where the city’s original airport was renamed after World War II; the U.S. Naval Academy; and the island itself, which was declared a national memorial in 2000.

So if you’re looking for something to do this June 4, or on any other national patriotic day: Remember Midway.