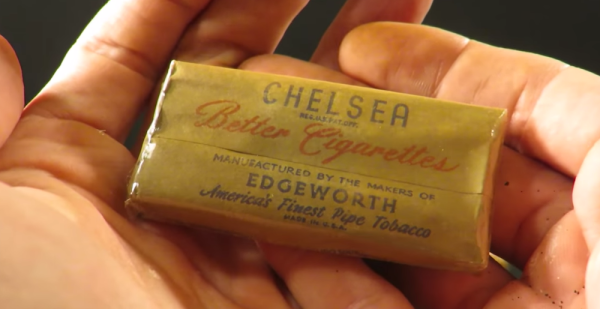 If you got your hands on a U.S. Army K-ration from 1943, would you peel back the box top, dump out the contents, and chow down on the 74-year-old meal? I wouldn’t. But lucky for us, there’s one YouTuber who does: Prolific YouTuber Steve1989 has uploaded more than 100 videos where he not only reviews and explains vintage MREs throughout history, but also consumes them on video for your viewing pleasure.

In his latest video, Steve eats his oldest meal yet, an authentic K-ration from 1943, and finishes it off with a World War II-era cigarette.

Steve managed to get his hands on the dinner version of the K-ration, which contained canned cheese, candy, biscuits, chewing gum, a powdered beverage, sugar cubes, and of course, cigarettes.

In the video, he delicately unwraps the box, taking care not to damage it, as he gingerly handles every item inside, providing useful tidbits of historical information about each one.

Despite finding a number of bugs, bland candy, and rancid biscuits in his K-ration, Steve powers through, trying everything except the rotten cheese, which he says “definitely smells awful.”

And for dessert, he pulls out one of the cigarettes, and savors it. “That’s a strong smoke,” he adds.

The K-ration, which was developed in 1942, was first used by paratroopers.

According to Steve, this was “a treasure find an exclusive rare look into a true historical time capsule of a truly pioneering era in military rations.”

Steve isn’t the only person who collects (and eats) surplus MREs, he's one of a growing number of military history enthusiasts who enjoys them. But also runs a site — MREinfo.com — where he explains how to purchase authentic rations from all different eras for between $40 and $60 a case.

For him, it’s more than just a hobby, it’s a passion. And though I wouldn’t recommend going out and buying moldy MREs for dinner tonight, it’s certainly entertaining to watch Steve eat them and share his wealth of ration knowledge.