Here’s something that may sound odd or disgusting to anyone who’s ever served in the military: Field ration connoisseurship is... 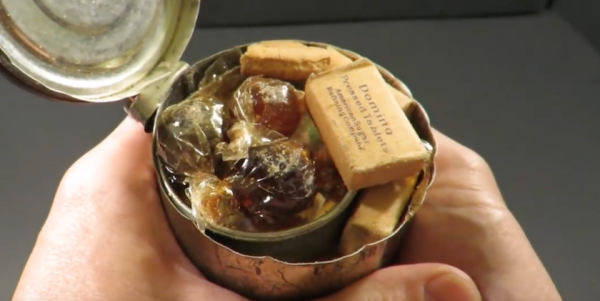 Here’s something that may sound odd or disgusting to anyone who’s ever served in the military: Field ration connoisseurship is a real thing. In fact, there’s a whole subculture around collecting meals ready to eat. Like, really — people pay good money for old MREs and then they eat them…because they want to.

The man in the video posted below, who goes by the YouTube handle Steve1989, is something of a celebrity in the MRE world. Steve is like Anthony Bourdain, except that, instead of traveling the world sampling exotic cuisines and meeting interesting people, he hangs out in his bedroom and eats dehydrated food. He has fans, lots of them. Many of his videos go viral.

Steve doesn’t smoke stale government-issued cigarettes and stuff his face with decades-old crackers and sardines to shock people. He genuinely enjoys MREs. The older and more obscure, the better. In this episode — which is one of 105 videos he’s posted to YouTube — Steve treats himself to a World War II U.S. Army Field Ration C B Unit, and gives us, the viewer, a little history lesson along the way.

“The C-ration’s original objective was to provide the soldier with a readily carried ration, which he could use in combat, independent of outside sources of supply and central preparation facilities,” Steve explains.

The real fun begins when Steve finally cracks open the ration. “Wow, check that out,” he says as we get our first glimpse at what’s inside the tin can. “What a time capsule. It smells kind of fruity and wholesome.” Then, unable to restrain himself any longer, Steve digs in, beginning with a piece of a 75-year-old biscuit. “Mm, that is so crisp,” he says. Adding, “This oldie is making me shake already.”

Steve discovers what appears to be mold as he prepares his meal, but that doesn’t stop him. He eats the entire ration, and savors every morsel.

If Steve has somehow managed to make MREs seem appetizing to you, check out his website, MREinfo.com. There you can get all of the information you need to find and purchase MREs, which apparently average $45-$60 a case. Worth it? That depends on how much you enjoy being really, really constipated.