It's National Doughnut Day! Yes, it's a made-up holiday. But for doughnuts! Doughnuts for service members! Do you not like... 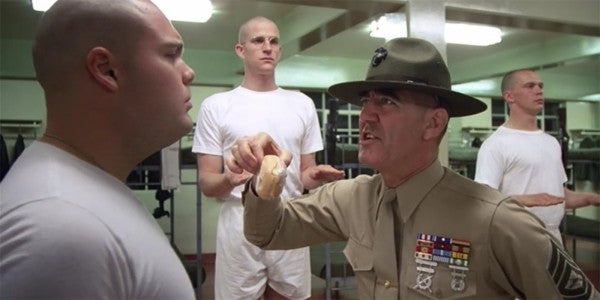 It's National Doughnut Day! Yes, it's a made-up holiday. But for doughnuts! Doughnuts for service members! Do you not like donuts? Oh, are you one of those “WARRIOR FOOD” types? Good for you. But you should know that National Donut Day (either spelling works, and I'm lazy) actually is a military holiday, and for good reason: The modern-day U.S. national security complex would look dramatically different, if not for deep-fried sugar dough.

Let us count the myriad ways that the modern revolution in donut affairs has transformed the armed services:

1. How did donuts even get to America? By helping the U.S. Army win World War I.

Seriously! My colleague Sarah Sicard literally wrote the story on it: Volunteers for the Salvation Army traveled to the Western Front with the U.S. doughboys in 1917, “and together they rolled crullers by hand to give to homesick soldiers.” Like, as many as 9,000 donuts a day for soldiers overseas.

Once victorious and back stateside, the vets' hunger for fried sugar was so great that it led New York City's Adolph Levitt to develop the first doughnut machine in the United States.

By 1938, the Salvation Army “lassies” and their donuts for GIs became such a big deal they actually formed the basis for National Donut Day, which, again, is the pseudo-holiday today that I'm using as an excuse for this post. Time is a flat circle.

2. You can't have a warrior ethos without picking on sugary “weakness.”

Have you seen “Full Metal Jacket”? Ha ha ha, just kidding — of course you have. So you know the power of a jelly donut to motivate a drill instructor… and a recruit platoon.

As the German idealist philosopher Georg Wilhelm Friedrich Hegel notes in his “Phenomenology of Spirit,” a master-slave dialectic describes the groundwork for self-identity through the negation of another's identity; in other words, you are hard because the world's Pvt. Pyles are soft stacks of digested jelly donuts. You are proud because you are not him. You are enjoying the jelly donut by not enjoying a jelly donut. Congratulations, warrior!

3. You can't have a senior enlisted corps in the Navy if you don't have donuts.

Pretty sure it's in the regs: You can't make chief if you're not hitting your donut quota. Your detailers have all the necessary admin on this; there's a tracker sheet to fill out.

Fortunately, this lesson has percolated down to the Navy's junior officer training:

Because every butter-bar division officer needs to understand how chiefs tick, in all their Boston cream-swilling, gigline-busting glory.

4. Also, they're not donuts. They're SWOnuts.

Get it right. SWOnuts. This is important. It is an indelible reminder of the special bond between a black-shoe shipboard sailor and a dunkable chunk of carbs to go with the morning joe.

Slight digression: Here's a video that comes up when you search for “Navy donuts” on YouTube. I don't know what's going on, but it's a Navy veteran, and there are donuts, so enjoy.

What is a female service member supposed to do to keep long hair off the uniform collar, while still getting a cover to fit smartly? Enter the donut bun:

This changes everything. Don't @ me.

Perhaps you've heard that from the late 1990s until very recently, there were no Dunkin' Donuts in California. That wasn't entirely accurate. Like the conquistadores of old bringing the Gospel and the power of empire to the New World, the Marines brought Dunkin' with them to Camp Pendleton. For a few years beginning in 2012, Pendleton's was the only DD store in California, a state with the world's sixth largest economy.

And judging from the Yelp comments, the locals greeted the donut-bearing Marines as liberators.

If you don't give vets their donuts, they will hate you forever. Just ask the Red Cross. NPR explains:

The story starts when Russ Roberts, a George Mason University economist, started hearing about how veterans don't like the Red Cross. That struck him as odd, and when he asked about it, he always got the same answer: the doughnuts.

“And I thought, the doughnuts?” Roberts says. “What could that be?”

Go to any VFW hall, even today, and you'll get the same story: During World War II, the Red Cross had comfort stations for soldiers overseas, with free coffee and free doughnuts. Then, in 1942, the Red Cross started charging for the doughnuts. Soldiers have held a grudge ever since.

The crazy thing is this policy lasted, like, a couple years tops — “for most of the last 70 years, Red Cross doughnuts have remained free — but veterans haven't forgotten,” NPR adds. But veterans have a long-ass memory for the wrongs committed against them. Don't mess with their bennies. And definitely don't gouge 'em on the donuts.