UNSUNG HEROES: The Medal of Honor Recipient We’ve Been Waiting For 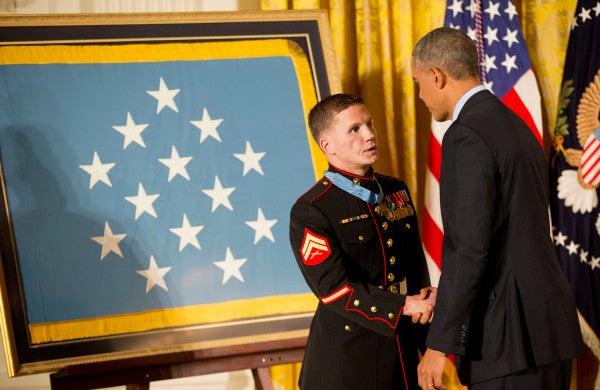 Retired Marine Cpl. Kyle Carpenter joined the highest ranks of military heroism today, when President Barack Obama awarded him the Medal of Honor for the his actions in Helmand province, Afghanistan in 2010.

According to his Medal of Honor citation, Carpenter was conducting security on a rooftop in the Marjah district of Helmand province when the Taliban launched a grenade attack in broad daylight. One grenade landed near Carpenter and his best friend, Lance Cpl. Nick Eufrazio. In a move that the citation describes as “Without hesitation and with complete disregard for his own safety,” Carpenter moved toward the grenade in an attempt to shield the other Marine from its blast. “When the grenade detonated, his body absorbed the brunt of the blast, severely wounding him but saving the life of his fellow Marine.”

The Medal of Honor, the nation’s highest award for gallantry, is often awarded when a service member makes a decision in the line of fire that he or she believes will end their own life for the good of other troops. Carpenter should have died, but underwent an extensive recovery process that ultimately resulted in a total recovery, though with a glass eye, replaced jaw, and comprehensive surgeries.

At the ceremony, the president addressed taking on the terrible power of a grenade blast and recovering.

“This man, this United States Marine, faced down that terrible explosive power, that unforgiving force with his own body, willingly and deliberately, to protect a fellow Marine,” Obama said.

His story is one of resiliency, of perseverance, of heroism, and of incredible advancements in medical technology.

“His injuries were called 'catastrophic.' It seemed as if he was going to die. While being treated, he went into cardiac arrest and flat lined three times. And three times, doctors brought him back,” said Obama. “Along with his parents, who call Kyle's survival 'our miracle,' we thank God they did.”

In Carpenter’s story, there is incredible potential and hope for the future, sense that this young man has seen the worst that could possibly come, but isn’t nearly done fighting.

“Kyle is a shining example of what our nation needs to encourage,” the president said, “these veterans who come home and then use their incredible skills and talents to keep our country strong. And we can all learn from Kyle’s example.”