UNSUNG HEROES: This Marine Singlehandedly Cleared An Enemy Trench During The Invasion Of Iraq 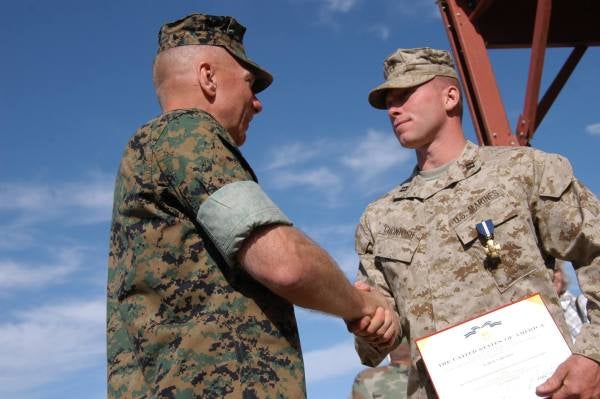 When 29-year-old, then-1st Lt. Brian Chontosh’s convoy was caught in an intense ambush Mar. 25, 2003, during its push north near the Iraqi city of Ad Diwaniyah, his platoon couldn’t move forward because coalition tanks blocked the path. In response, Chontosh ordered the driver of his humvee to steer directly into the berm from which Saddam Hussein’s regime soldiers were staging their attack.

It was the first major firefight of the war for the anti-armor platoon Chontosh led, belonging to Weapons Company, 3rd Battalion, 5th Marines, 1st Marine Division. Moments after the ambush began, Iraqi troops had already hit two vehicles with machine-gun, rocket-propelled grenade, and mortar fire, killing one soldier and severely wounding another.

As soon as Chontosh’s humvee slammed into the berm, he got out and ran down a dry irrigation channel used as a trench by dozens of Iraqi soldiers. Chontosh had never killed an enemy combatant in previous deployments to conflict zones in Bosnia and Liberia, but now he was shooting so many that his M16 was quickly running low on ammunition.

His charge was able to continue thanks to suppressive fire from Cpl. Thomas Franklin, who manned the humvee’s .50 caliber machine gun, firing more than 1,500 well-placed rounds throughout the engagement, according to a report by Stars and Stripes. Chontosh was also supported by two other occupants in his humvee, Cpl. Armand McCormick and Lance Cpl. Robert Kerman, who followed behind throughout his assault in the trench. When Chontosh finally expended all of his M16 ammunition, he switched to his 9mm pistol. He emptied it, reloaded, and emptied it again, according to an excerpt of Phil Zabriskie’s Kindle single “The Kill Switch,” as published by Newsweek. Then, he picked up an AK-47 rifle from a dead Iraqi.

By the time Chontosh advanced a few hundred yards down the trench, he had expended the ammunition in two separate AK-47s and found himself firing a discarded Iraqi RPG launcher. His Navy Cross medal citation states he used the RPG “to destroy yet another group of enemy soldiers.” But Chontosh remembers differently.

“It was a terrible shot,” Chontosh told Zabriskie. But Chontosh had been deadly accurate with his previous slew of weapons. Accurate enough, in fact, that one Iraqi soldier decided his best chance was to just play dead.

Chontosh stumbled upon him while on his way back to the humvee, noticing that the “dead” Iraqi was actually holding a grenade, likely waiting to ambush the Marines in a suicide attack. None of the Marines had any ammunition left, but Chontosh retrieved some M16 rounds that had fallen when he tried to clear a previous rifle jam, and killed the man, according to Zabriskie’s account of the battle.

Killing to Chontosh didn’t look like it did on television. It was less clean, and the bodies fell differently.

“It’s ugly, it’s violent, it’s disgusting, I wish it wasn’t part of what we had to do,” Chontosh told Zabriskie.

For his incredible bravery and valor under fire that day, Chontosh received the Navy Cross, the second highest award for gallantry in combat, beneath only the Medal of Honor.

“When his audacious attack ended, he had cleared over 200 meters of the enemy trench, killing more than 20 enemy soldiers and wounding several others,” reads his Navy Cross citation.

Chontosh’s complex reaction to his own actions reflect the mind and spirit of a thoughtful warrior.

Chontosh compared the complexities of combat to a sport with extraordinary high stakes.

“It’s the ultimate sport, maybe, where — you talk about the price, what’s the price for failure? In a sport, a silver medal maybe. But when we start talking about combat, the price for failure is definitely something a little more significant and likely, nine times out of ten, is watching a brother bleed out and die before your eyes because you failed physically,” explained Chontosh in a 2009 video presentation at a conference of the American Society of Exercise Physiologists about using CrossFit-style workouts to improve Marine performance.

Chontosh credits the assistance of McCormick and Kerman, who each received Silver Stars, in addition to Franklin’s contribution on the .50 caliber machine gun, earning him a Navy and Marine Corps Commendation Medal with “V” for valor.

Like many other servicemen who display exceptional bravery, Chontosh doesn’t see himself as a hero. His actions, he told Stars and Stripes, were the same as “an average dude doing exactly what anyone else that cared, that loved his people, or had a sense of what they were supposed to be doing.”