Ever wonder how Marines go through doors that don’t want to open? A new video on YouTube from III Marine... 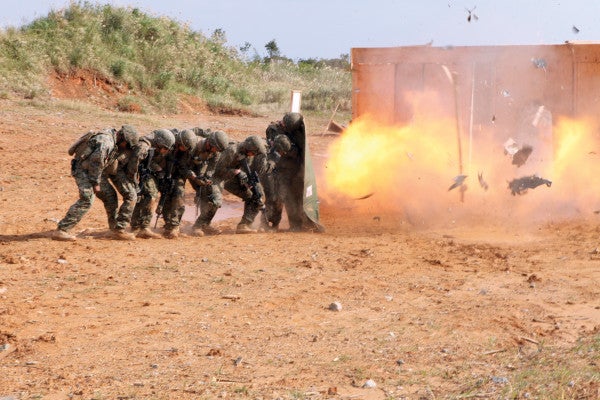 Ever wonder how Marines go through doors that don’t want to open? A new video on YouTube from III Marine Expeditionary Force shows how.

The video demonstrates how entering buildings in a combat environment can be complicated and dangerous. When you cannot walk through the front door, you have to resort to much more aggressive means. “In certain environments we’ll be required to do so using explosives,” says 1st Lt. Andrew Paulmeno of 3rd Marine Logistics Group, 9th Engineer Support Battalion, whose Marines demonstrated the breaching techniques.

Breach teams include a breacher that both primes and detonates the charge, an assistant breacher who places the charge, and a blanket man who holds the protective blanket shielding the Marines from the blast.

The breacher gives a “hasty breacher’s brief,” in which he describes “the target that they’re attacking, the charge that they’ll be using, appropriate standoffs, and the casualty collection plan in the event that there should be casualties within the team,” Paulmeno explains.

As the Marines prepare the breach, they stack up behind the blanket man. The breacher’s detonator “provides instantaneous shock from when the Marine presses on the detonator to when the charge should explode.”

As soon as the breaching charge is detonated, they unstack and proceed to enter through a the newly formed hole created by the explosion. “Once the Marines come out of the stack, they will aggressively breach that target to fight their way inside.”

Check out the full video below, and you can stay up to date on everything III MEF is doing on Facebook.