Have you ever been blown away by the sight of a beautifully engineered combat aircraft taking flight? Probably not as... 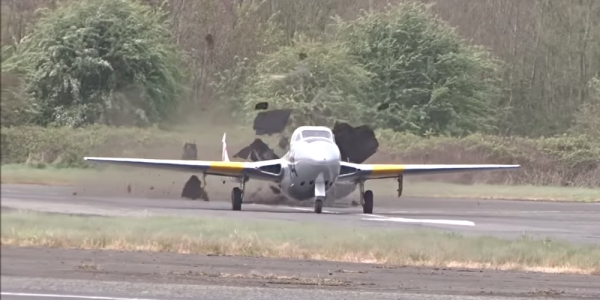 Have you ever been blown away by the sight of a beautifully engineered combat aircraft taking flight? Probably not as blown away as this poor stupid runway.

During the Halfpenny Green Airshow on April 28, a privately-owned vintage de Havilland Vampire fighter jet managed to mangle a runway at the Wolverhampton Halfpenny Green Airport, U.K. Luckily for us, the entire incident was captured on camera:

You can see trouble brewing on the taxiway, but the real fun begins about halfway through the two-minute clip. As the pilot ramps up power for takeoff, the footage shows exhaust from the fighter’s muscular Goblin engine tearing chunks of the tarmac, some of them at least five feet wide, right out of the ground.

It may be the nastiest burnout we’ve ever seen, which is saying something, considering the dainty little landing gear on this sleek machine. (It landed safely on an adjacent runway, in case you’re interested.)

Our friends at Popular Mechanics, who first flagged this footage for us on Wednesday, provide some interesting historical context on the Vampire:

The de Havilland Vampire was one of the UK's first jet fighters, first joining the RAF in 1946. The Vampire was one of a handful of forked tail fighters, including the World War II P-38 Lightning and the Sea Venom jet fighter. This particular Vampire, WZ507 is a twin-seat trainer with side by side seating. The Vampire has relatively short landing gear, which puts its jet engine exhaust close to the ground. The blast of hot air was too much for the runway, which appears very old or defective.

It’s worth noting that the de Havilland Goblin was one of the earliest turbojets used by the Royal Air Force. Based on the footage, it seems this powerful machine has stood the test of time far better than the Halfpenny Green runway.

If you’re as impressed as we were by the Vampire’s aggressive thrust, then you’re in luck: one of these bad boys is available for purchase for just under $130,000. And don’t even worry about durability: According to Vampire Preservation Group, the incident didn’t leave a scratch on the aircraft.

Alas, the same can’t be said of Runway 10 at EGBO/Halfpenny Green.