A Short History Of America’s Formal Declarations Of War

On the 4th of July, we celebrate the 241st anniversary of the signing of America’s Declaration of Independence, and the... 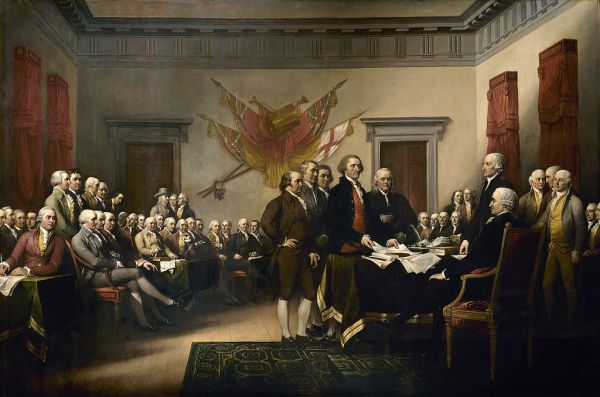 On the 4th of July, we celebrate the 241st anniversary of the signing of America’s Declaration of Independence, and the founding of the United States as an independent nation. The declaration, drafted by Thomas Jefferson, has become one of the most influential documents ever drafted in the English language.

The declaration, however, for all of its influence on political and moral philosophers in years to come, is often misunderstood. It was in fact America’s first declaration of war. In justifying the revolution, the declaration’s Bill of Particulars outlines the king’s “repeated injuries and usurpations” of Americans’ right and liberties, and then states:

Despite the Declaration of Independence not actually containing language declaring war on the British Crown, its intent was clear. The signers knew full well that the king of England would view the declaration as an act of high treason, one of the most serious felonies against the Crown during the 18th century, and would respond with military force against the colonies.

The Treaty of Paris, which ended the Revolutionary War in 1783, resulted in the establishment of the 13 colonies as free, sovereign, and independent states. It also had the effect of significantly enlarging the United States’ boundaries, west to the Mississippi, south to Spanish Florida, and north to British Canada. Following the end of the Revolutionary War, Congress would enact the United States Constitution in 1789, framing a national government and enshrining the supreme law of the land, which included the Congress’ ability to declare war.

Future declarations of war would be governed by Article 1, Section 8 of the Constitution, which states, “Congress shall have power to … declare War.” Despite America’s involvement in dozens of regional conflicts over the ensuing centuries, in fact, United States has only formally declared war 11 times. On a day that we celebrate the United States’ first declaration of war by the Continental Congress, it is worth revisiting Congress’s other formal declarations of war, and how they shaped our history.

On June 18, 1812, Congress passed an act declaring war against the United Kingdom of Great Britain and Ireland. The War of 1812 was Great Britain’s second shot at its former colonies, and was considered at the time to be America’s “Second War of Independence.”

The reasons for the war were numerous. Great Britain had imposed trade restrictions on the United States as a result of Britain's continuing war with France, American merchant sailors were frequently impressed into the Royal Navy, and the British continued to support American Indian tribes’ raids against American expansion by supplying weapons and ammunition.

Most importantly, many political leaders at the time, including Andrew Jackson, saw the war as a matter of upholding America’s honor. Great Britain, had frequently violated U.S. independence in conducting international affairs and observing the laws of the sea. An attack by the British warship HMS Leopard against the American frigate USS Chesapeake while looking for deserters from the Royal Navy was only one of many similar events that fired up American indignation. The war resolved many of the outstanding issues about America’s identity that remained after the revolution, and a peace treaty, the Treaty of Ghent, was signed on December 24, 1814, restoring relations between the two countries “status quo ante bellum,” returning borders to where they were before the commencement of hostilities.

America’s next formal declaration of war took place 34 years later. On May 13, 1846, Congress passed “An Act providing for the Prosecution of the existing War between the United States and the Republic of Mexico.“

The Mexican-American War was, in essence, a war of American expansion. President James K. Polk believed strongly in westward expansion to the Pacific Ocean and the concept of America’s manifest destiny, and he took advantage of a Mexican government recently weakened by its independence from Spain. In 1845, he sent a U.S. diplomat to Mexico City with a proposal to purchase California and New Mexico for $24-30 million. The diplomat’s arrival in Mexico City was greeted with consternation, and the Mexicans refused to receive him, citing a problem with his credentials. Polk regarded this rebuff of his advances as an insult and an “ample cause of war.” While preparing to ask Congress for a declaration of war, Polk received word that a Mexican force had crossed the Rio Grande and ambushed an American Army unit. Viewed as a just cause for war, Congress quickly declared war.

The Mexican-American War lasted a year and a half, and would result in an American Army capturing Mexico City, ending the war in a victory for the United States. The Treaty of Guadalupe Hidalgo outlined the terms of peace: Mexico would cede California and New Mexico to the United States in exchange for $15 million, and would accept the loss of Texas and the Rio Grande as its national border.

It was 52 years later, in 1898, when the United States declared war on Spain following the Spanish government’s crackdown on a Cuban revolt against Spanish rule. At the risk of being facetious, the cause for the war was simple: It was both popular among the American populace, and it sold newspapers. William Randolph Hearst, the newspaper mogul, saw the disturbances in Cuba as a way to sell newspapers and exaggerated accounts of Spanish atrocities against the Cuban populace. After the USS Maine, an American warship sent to Cuba to protect American citizens, mysteriously exploded and sank in Havana Harbor, Hearst’s newspapers quickly pinned the blame on Spanish authorities, and fueled American anti-Spanish propaganda. American public opinion, and the opinion of Congress, quickly swung in support of war, and despite President William McKinley’s reservations, an American blockade was established on Cuba.

Like the Mexican-American War, the Spanish-American War resulted in an American victory and an expansion of America’s territory. John Hayes, America’s Ambassador to London, wrote in a letter to his friend Theodore Roosevelt that it had been “a splendid little war.” In the Treaty of Paris, Spain relinquished sovereignty over Cuba, and ceded the Philippine Islands, Puerto Rico, and Guam to the United States for $20 million. The Spanish-American War helped redefine America’s national identity by showing southerners and northerners, as well as blacks and whites, fighting successfully on the same side.

A short 19 years later, America’s emerging involvement in world affairs would be sorely tested when it was drawn into the First World War, which was ignited after the assassination of Austrian Archduke Franz Ferdinand in Sarajevo. The assassination kicked off a domino effect of international treaties that drew all of the major European nations into armed conflict.

Initially, the United States pursued a policy of non-intervention and attempted to avoid the conflict. However, when a German U-boat sank the British liner RMS Lusitania in May 1915 causing 128 Americans casualties, President Woodrow Wilson warned Germany that the United States would not tolerate unrestricted submarine warfare. Germany temporarily halted, and then resumed unrestricted submarine warfare in 1917, despite recognizing that it would draw America into the war.

The United Kingdom intercepted a telegram in which the German foreign minister invited Mexico to join the war as Germany’s ally, and promised that it would help Mexico recover Texas, New Mexico, and Arizona. The United States viewed the telegram as cause for war and Congress approved a resolution declaring war on April 6, 1917. Almost exactly eight months later, Congress unanimously voted to declare war on Austria-Hungary on December 7.

The Treaty of Versailles was signed on June 28, 1919, ending World War I, and breaking up the Austro-Hungarian and Ottoman empires by redrawing political boundaries in Europe. It also established the United States as an emerging world power. The Treaty of Versailles further placed restrictions on Germany’s future military forces, and required reparations by Germany that served to bankrupt the German economy. These terms were a significant national shame that Adolph Hitler was able to successfully exploit in his subsequent rise to power.

While the war between the Allied and Axis powers had been raging since September of 1939, a sense of isolationism and non-interventionism following its costly involvement in the First World War caused the United States to attempt to remain neutral. This neutrality was shattered on December 7, 1941, following the Japanese attack on U.S. naval forces at Pearl Harbor. President Franklin D. Roosevelt declared the attack on Pearl Harbor “a day that will live in infamy” and Congress declared war on Japan the following day. Three days later, the declaration of war was expanded to other Axis powers. On June 5, 1942, additional declarations of war were made against the Axis powers of Bulgaria, Hungary, and Romania.

The war ended on September 2, 1945, after four years of conflict and an estimated 50-to-85 million fatalities. The division of Europe into post-war occupied zones between Great Britain, France, and the United States in Western Europe, the Soviet Union in Eastern Europe, and China in the Pacific, set the stage for the Cold War.

Not in our day, but at no distant one, we may shake a rod over the heads of all, which may make the stoutest of them tremble. But I hope our wisdom will grow with our power, and teach us, that the less we use our power, the greater it will be.

Thomas Jefferson’s words have proven to be prophetic. Today, the United States possesses the most powerful military in the history of the world. Despite only 11 formal declarations of war by Congress, the United States has been engaged in some form of armed conflict almost continuously since the nation’s inception.

When the delegates to the Continental Congress signed the Declaration of Independence, victory against Great Britain was far from certain. The United States were then but small colonies in a world of global European empires, seeking self rule, independence and isolation from the affairs of the world. The signers of the declaration could hardly have envisioned the series of events they were setting into motion that would lead to our long history of armed conflict and the development of the United States into the world’s preeminent military superpower.

We can only hope along with the realization of Jefferson’s prophecy, we heed his advice; that “the less we use our power, the greater it will be.” The signing of the Declaration of Independence, America’s first declaration of war, was simply the first step.