Over the past weekend, Colt Defense announced that it was filing for Chapter 11 bankruptcy; a move that signaled how... 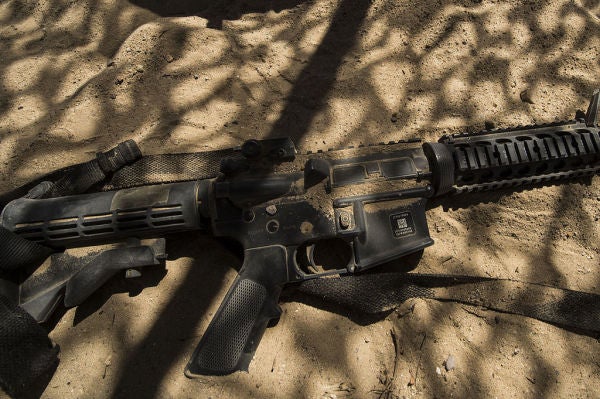 Over the past weekend, Colt Defense announced that it was filing for Chapter 11 bankruptcy; a move that signaled how dire the legendary gun company’s situation really was. Their latest setback was the loss of an Army contract in 2013 to FN Manufacturing for the production of the M4 carbine. But Colt’s problems began well before that, and Colt must restructure itself to fit in a changing gun industry.

Colt’s pedigree as an manufacturer of firearms stretches back over a century ago. Named after its founder Samuel Colt, the company helped pioneer the introduction of the revolver, starting with the Colt Walker in the late 1840s, and Colt Dragoon pistols in the 1850s. Europe took notice of Colt’s manufacturing techniques and interchangeable parts, and military sales overseas began to blossom. Colt pistols even armed both sides of the Crimean War. The culminating design for the company was the Colt Model 1873 Single Action Army, released after the Civil War. Nicknamed the “Peacemaker,” the Single Action Army became the ubiquitous firearm of the America’s expansion to the Pacific coast, becoming known as “the gun that won the West.”

Perhaps the most enduring product of Colt manufacturing would come at the start of the 20th century. John Browning, America’s most iconic firearms designer, produced the M1911 semiautomatic pistol for a competition seeking to find a new sidearm for the Army. The pistol was one of the first successful magazine-fed handguns, and the 1911 design set the standard for semi-automatic pistols that would follow.

The basic design remains an institution in American gun culture over a century after its introduction. The caliber it introduced, the .45 Automatic Colt Pistol, remains popular as well. Colt also provided manufacturing for several other outside designs, like the Thompson submachine gun. Colt would also go on to produce several of the U.S. military small arms in World War II.

After the end of the Second World War, Colt found itself in a state of flux. But after a production stoppage and some corporate restructuring, it soon acquired a flagship asset in 1959 from the Armalite Corporation: the AR-15 rifle design. A few years later, Colt’s acquisition paid off; the AR-15 began limited service with the U.S. military as the M16. The weapon ran into many teething issues, but by 1967, many of these issues were resolved and improved. The M16A1 became the standard rifle for both the Army and Marine Corps. Colt now had two lucrative contracts supplying the primary sidearm and rifle for the military. On the civilian front, Colt was enjoying brisk sales with law enforcement, with the Colt Police Positive and Python revolvers arming police agencies across the country.

But as the the 1980s began, Colt’s gravy train began to come off the tracks. First, the M1911 pistol and its .45 ACP round were replaced by the 9x19mm Beretta 92FS. Known in military service as the M9, it was the winner of the 1985 Army competition to choose a new sidearm chambered in the standardized NATO pistol caliber. Foreign handguns like the Beretta 92FS and the Sig Sauer P226 began to eat into Colt’s police sales, as police desired semi-auto, double-action, higher capacity handguns that Colt simply didn’t offer. One pistol in particular would come to dominate both the civilian and police markets: the Glock. Made in Austria by GLOCK Ges.m.b.H., the polymer-constructed, striker-fired handgun surged in popularity in the late 1980s. Glock pursued an aggressive marketing strategy directed at law enforcement, promising wholesale pricing and plenty of parts support. Glock’s strategy has paid off, with over 60% of law enforcement in the United States carrying a Glock pistol of some kind, not to mention the sales to the civilian market.

American manufacturers seemed unable to stymie Glock’s rise; Smith & Wesson released a pale imitation that got the company sued by the Austrian gun maker, and Colt’s effort, the Colt 2000, was described as “an embarrassing failure” by Colt historian Rick Sapp. Colt had other issues beside market competition, however. A lengthy manufacturing strike led to decreasing quality, and in 1988, Colt lost the Army’s M16 production contract to Fabrique Nationale, a Belgian manufacturer that would later rebrand its U.S. productions facilities as FN Manufacturing. These factors, coupled with the failure of products like the Colt 2000, led to Colt declaring Chapter 11 — in 1992.

After restructuring and surviving a consumer boycott spurred by Colt CEO Ron Stewart’s remarks on gun control, Colt’s position began to rebound. In the years after the Sept. 11 attacks, the M4 carbine was starting to replace the M16 as the primary service rifle due to the increased emphasis on close-quarters battle in Iraq and Afghanistan. The 1994 Assault Weapons ban expired in 2004, and popularity of AR-15 style rifles skyrocketed. As the accessories industry for AR-15s gained prominence, Colt offered some innovative new options that took advantage of the market's desire to customize and retrofit their rifles with a dizzying amount of rails, optics, and other gear. Colt even got a new pistol contract, making modernized M1911s for specialized units in the Marine Corps. But as the announcement of the second bankruptcy filing in less than 25 years shows, it was a short upturn. The loss of the M4 contract, coupled with its old rival Glock’s inroads into the special operations handgun market, sealed the deal for Colt’s Chapter 11 filing.

In the 21st century, Colt simply did not adjust to the modern realities of the small arms industry. Companies like Smith & Wesson finally began to offer worthy competitors to the Glock, whereas Colt never did. The AR-15 market contains dozens of manufacturers, making it more difficult for Colt to compete. Other companies like Knight’s Armament and Bravo Company USA have diversified, building rail systems, optics mounts, and other accessories that they can sell independent of their own rifles. Within the M1911 market, Colt was no longer the go-to company for the design it had originated; instead custom shops like Springfield Armory, Wilson Combat, and Kimber Manufacturing rose to the top.

As Colt rethinks itself yet again, the question remains whether it can be resurrected with the current state of the industry.