On Dec. 7, 2015, Ed Salau, who lost his leg to an injury sustained in combat, underwent surgery to implant... 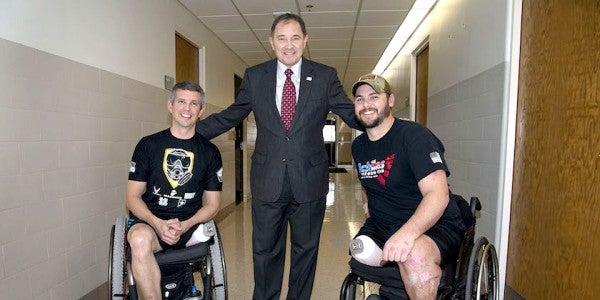 On Dec. 7, 2015, Ed Salau, who lost his leg to an injury sustained in combat, underwent surgery to implant a titanium rod into the base of his femur. It was the first time the procedure had been performed in the United States. But it was worth the risk.

If everything went according to plan, Salau would be able to walk pain-free for the first time since 2004, when two rocket-propelled grenades badly mangled his left leg in Iraq.

On Feb. 8, 2016, during phase two of the procedure, surgeons attached a docking mechanism for a prosthetic leg to the titanium rod.

In April, Salau attached his new prosthetic leg and stood up.

“I can feel the ground again,” Salau was quoted saying in Department of Veterans Affairs press release. “I haven’t had that sensation in eleven years.”

Salau is one of two veterans participating in a lengthy VA-funded clinical trial that could eventually transform the lives of thousands of amputees. The device, called a percutaneous osseointegrated prosthesis, or POP, allows for a prosthetic leg to be securely attached without a socket, which often cause pain and discomfort.

The moment Salau stood up on his new leg was the culmination of more than a decade of research.

“I can’t believe this day is here,” Dr. Sarina Sinclair, a key researcher on the team, was quoted saying in the press release. “It’s so surreal.”

There is still much work to be done, however. It could be five years before the POP is widely available.

But Salau’s progress so far is promising. Over time, the muscles in his legs will grow stronger as the titanium rod fuses with bone, making it possible for him to move with relative ease. Each day is another opportunity to walk a little further. His goal: To climb Mt. Kilimanjaro.