A video posted to the YouTube channel WarLeaks on April 22 shows Colombian special forces conducting a raid in Chocó,... 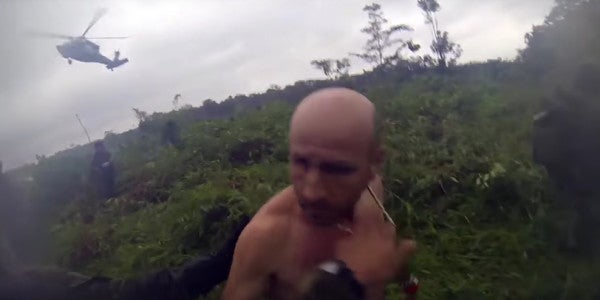 A video posted to the YouTube channel WarLeaks on April 22 shows Colombian special forces conducting a raid in Chocó, Colombia, which led to the capture of the wanted narco gang leader Édgar Gutierrez Arenas.

The footage, shot by helmet cam, shows special forces troops moving through jungle terrain to apprehend Arenas, the leader of the Úsuga Narco gang. The video lasts just over 90 seconds, but in that short time it offers an inside look into the particular, and dangerous, missions that special forces engage in.

The video opens with a firefight, and then cuts to a point-of-view run along dirt paths as the special forces soldiers break contact and move toward their quarry.

Throughout it all a Black Hawk helicopter hovers nearby in a support position, presumably spotting for the ground troops as they converge on Arenas before taking him into custody. Arenas emerges from the thick underbrush shirtless and in jeans, and is immediately grabbed by the necklace around his neck and pulled along by the special forces soldiers.