The U.S. Coast Guard Southeast was forced to rescue an ultra-marathoner trying to run from Florida to Bermuda in an... 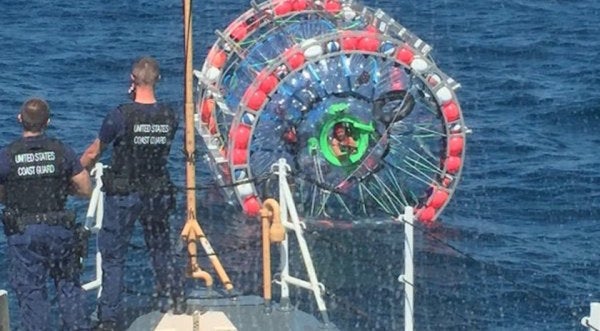 The U.S. Coast Guard Southeast was forced to rescue an ultra-marathoner trying to run from Florida to Bermuda in an inflatable bubble for a second time on April 24.

In a series of tweets, the service berated Reza Baluchi, who had ignored its warning after attempting the feat once before..

#BreakingNews: Adventure runner's voyage ends after he violated a USCG order not to embark on his seagoing journey. pic.twitter.com/FxNUEawySO

In 2014, the Coast Guard rescued him after receiving a report about a disoriented man in a bubble off the coast of Miami, who was asking for directions to Bermuda. However, he refused to be rescued when they arrived. Three days later, however, he needed to be saved. The rescue, which took place 70 nautical miles east of St. Augustine, required an HC-130 airplane and MH-60 helicopter, and Maersk Montana vessel, and cost taxpayers $144,000, according to Local 10 News in Florida.

This time, Baluchi was compliant and allowed the Coast Guard to rescue him voluntarily.

According to his website, this time, Baluchi was running to raise money “for children in need and to inspire those that have lost hope for a better future.”

Baluchi had intended to be at sea for five months, despite the Coast Guard’s warning that it was “manifestly unsafe.”

See the Coast Guard’s tweets below.

#BreakingNews: HydroPod voyage from Miami to Bermuda had recently been determined to be manifestly unsafe.

#BreakingNews Baluchi's 2014 attempt placed enormous financial burden on taxpayers for his rescue. He was recently ordered not to depart.