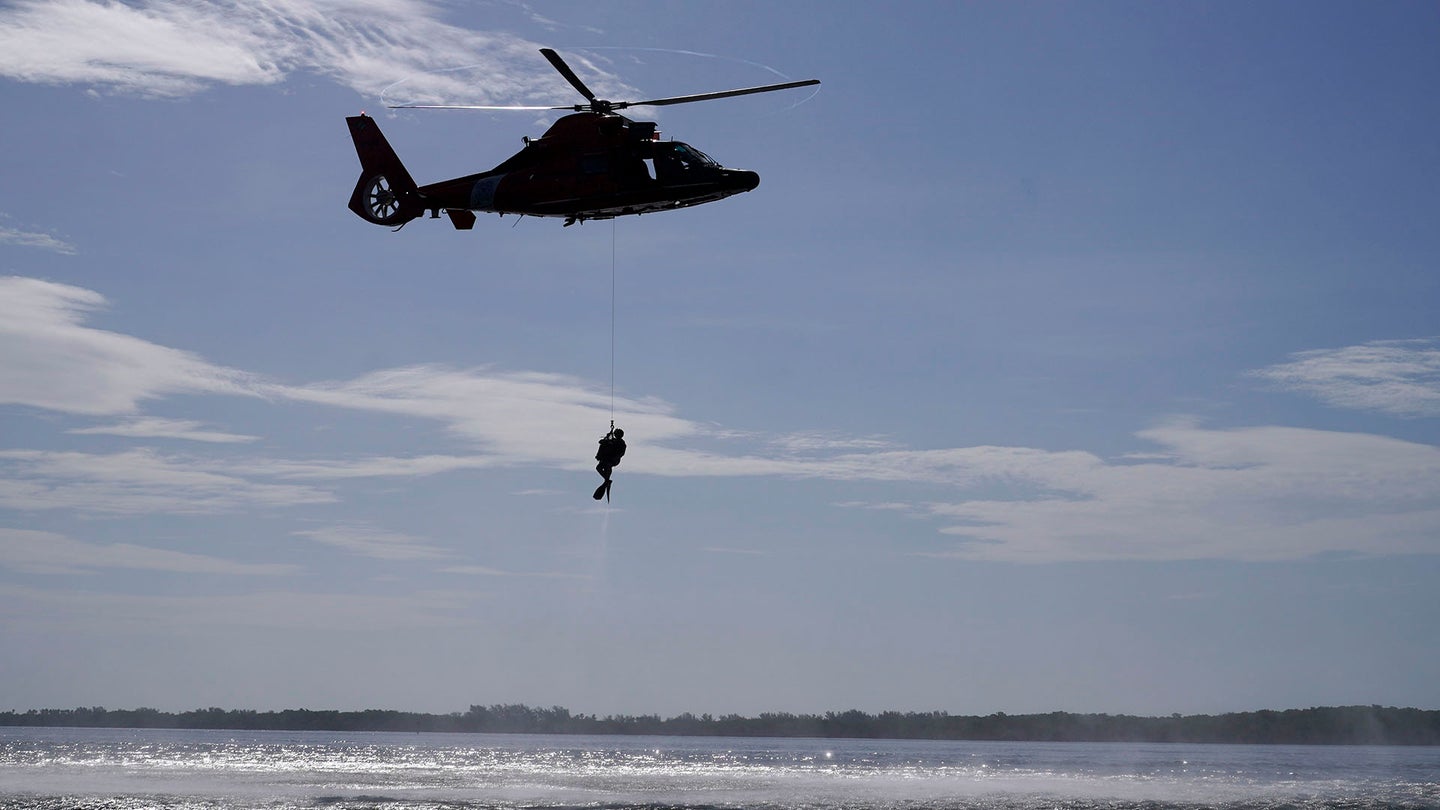 FILE: A U.S. Coast Guard member is hoisted out out the water by Air Station Miami MH-65 Dolphin helicopter crew during a rescue demonstration as part of a media availability, Thursday, June 9, 2022. (Lynne Sladky/Associated Press).
SHARE

A heroic Coast Guard rescue swimmer who received a personal thank you call from President Joe Biden for saving Florida residents trapped by rising floodwaters during Hurricane Ian is reportedly set to be involuntarily separated for not getting vaccinated for the novel coronavirus (COVID-19).

Aviation Survival Technician Second Class Zach Loesch told Breitbart News on Saturday that he expects to be discharged within the next 60 days for violating the Coast Guard’s mandate that all personnel be vaccinated for COVID-19.

Loesch also said that his application for a religious exemption and its subsequent appeal had both been denied.

Biden told reporters on Sept. 30 that he had spoken with Loesch and Coast Guard Lt Cmdr. Christopher Hooper to thank them and the rest of the service for launching search and rescue efforts after Hurricane Ian slammed into Florida on Sept. 28 as a very strong Category 4 storm.

At least 100 people have been confirmed dead in the hurricane’s aftermath, CNN reported on Monday.

“I also spoke to Aviation Survival – Second Class – Technician Second Class Zach Loesch, who described how difficult the decision is for people to leave everything and come to safety,” Biden told reporters from the White House. “I told him how proud of him I was and thanked him for all the work he and his Coasties are doing to save lives.”

Loesch told Breitbart that he did not want to ruin his call with Biden by mentioning that he is being discharged for not being vaccinated.

“It just sucks that he thanked me yet the vaccine mandate is what’s kicking me out,” Loesch told Breitbart. “I just love my job and I’m really good at it. It sucks. I feel like this is the job that I was born to do.”

When Task & Purpose asked the Coast Guard repeatedly if Loesch is being discharged for not being vaccinated for COVID, a spokesperson said the service does not comment on the vaccination status of individual members.

“Commanders, commanding officers, and officers-in-charge have been directed to initiate involuntary administrative separation for all members who have not followed the order to become vaccinated, and who do not have a pending or approved medical exemption or pending or approved religious accommodation,” the Coast Guard said in a statement. “Vaccination is necessary to be world-wide deployable and protects individual medical readiness, which protects unit and service readiness.”

The White House did not respond to requests for comment from Task & Purpose on Monday. But Republican lawmakers including Rep. Mike Waltz of Florida are publicly coming to Loesch’s defense.

In a statement to Task & Purpose, Waltz said the U.S. military cannot afford to lose service members like Waltz given frequent natural disasters, China’s military buildup, and Russia’s threats to use nuclear weapons in Ukraine.

“We need more service members like Zach Loesch who put their life on the line to save others – not less,” Waltz said. “And with the military’s current recruiting crisis, these skills will be extremely difficult to replace.”

The Coast Guard is the only military branch that falls under the Department of Homeland Security. The other military services are part of the Department of Defense, which made COVID-19 vaccines mandatory for all troops in August 2021.

However, thousands of service members have refused to get vaccinated on political and religious grounds. In the Army alone, More than 8,500 soldiers across the active-duty Army, National Guard, and Army Reserve have requested religious exemptions to the vaccinate mandate, but only 46 have been approved so far, according to the latest statistics from the Army.

Among the reasons cited by troops for seeking religious exemptions to the vaccine mandate is the debunked claim that the vaccines contain aborted fetal cells.

Fetal cell lines from abortions carried out in 1973 and 1985 were used in the testing and development of COVID-19 vaccines, but no aborted cells are in the vaccines that people take. Other vaccines that troops are required to take have also been developed from fetal cell lines including inoculations against rubella, chickenpox, rabies, and Hepatitis A.

Still, an anti-abortion group has filed a class action lawsuit against the Coast Guard, claiming that the vaccine mandate infringes on the religious beliefs of Coast Guardsmen who object to the fact that any fetal cell lines were used at all to develop the COVID-19 vaccines.

‘The Coast Guard has categorically refused to consider any religious accommodations for these American heroes, while at the same time allowing secular exemptions,” Stephen Crampton, senior counsel for the Thomas More Society, said in a Sept. 30 news release.

Loesch could not be reached for comment on Monday. He told Breitbart that he had to kick through the wall of one home to rescue a disabled woman and her husband, and then he went back to get her wheelchair.

“If I had asked any of the people I saved yesterday if they wanted to come with me even though I am unvaccinated, every single one of them would have said ‘yes,’” Loesch told Breitbart.

UPDATE: This story was updated on Oct. 3 with more information from the Coast Guard.