“It really makes all those maritime operations and makes jungle environment operations … easier.” 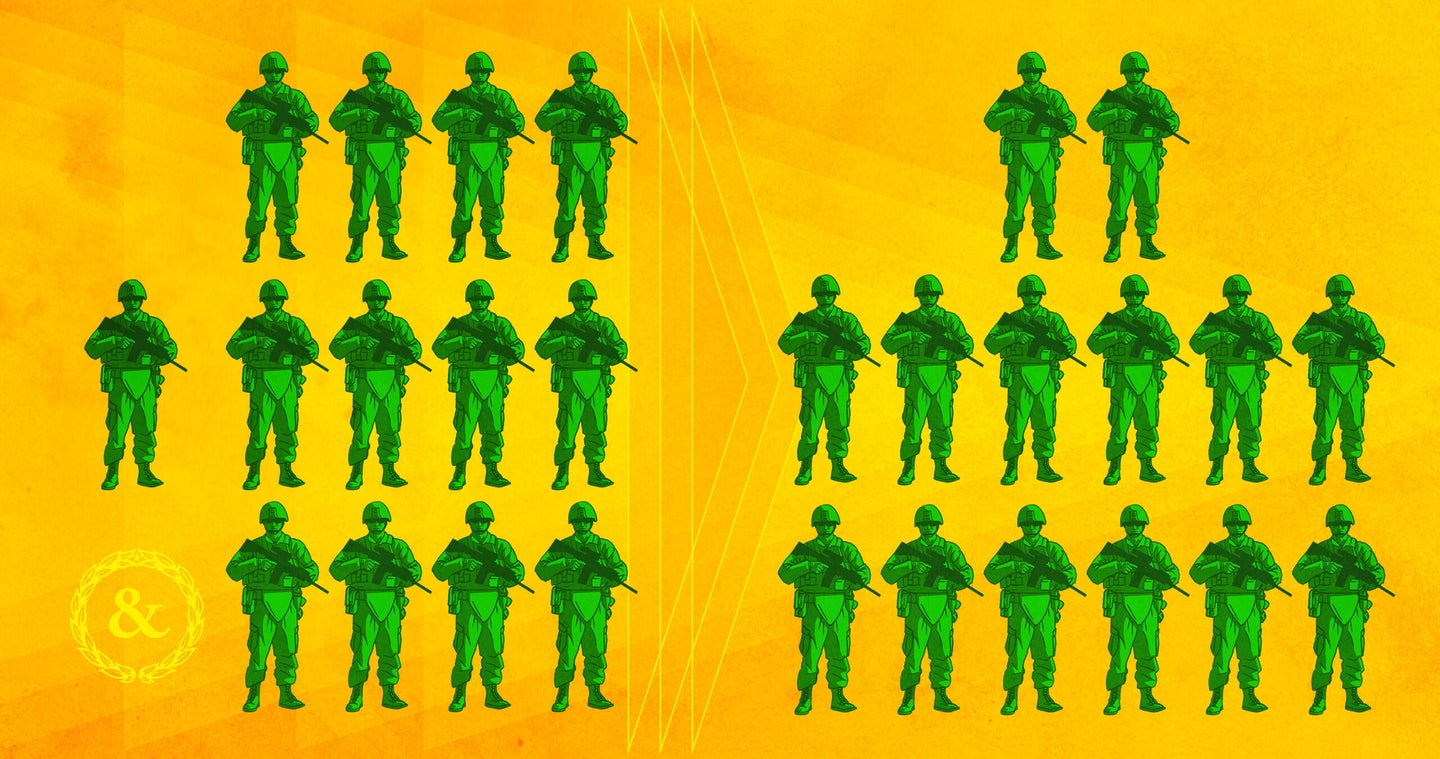 In the new Marine littoral combat team, squads will be made up of 14 Marines, split into 2 fire teams of six, with a squad leader and assistant squad leader. (Aaron Provost/Task & Purpose).
SHARE

As the Marine Corps focuses its attention on fights of the future, it’s no surprise that the service is undergoing significant changes.

One of the newest is the activation of the 3rd Marine Littoral Regiment — the first such unit of its kind. Activated earlier this year, the regiment is intended to signify a major shift in the way the Marine Corps will operate in the Pacific. And one of the most impactful changes that have come from it, Marines on Oahu told Task & Purpose this month, is what a squad in the regiment’s littoral combat team looks like.

“If I have four individuals, let’s say three teams of four, it’s going to be a lot harder to control them in the environment, whereas if I have two teams of six, I can separate myself and that team of six has enough firepower within themselves to essentially be able to defend themselves and attack,” Vandalen told Task & Purpose at a range on Marine Corps Base Hawaii.

Bravo Company was running through unknown distance marksmanship training at the base’s Range 5, which has to be one of the most beautiful military ranges in existence, overlooking the sparkling blue Pacific. But for the Marines, it was just another day, just another training exercise. Vandalen spoke with Task & Purpose alongside Capt. Robert Patterson, commander of Bravo Company, and 1st Lt. Nicholas Richards, the company’s executive officer, about the work their Marines have been doing since the regiment’s activation.

The 3rd Marine Littoral Regiment, 3rd Marine Division, was activated on March 3 and redesignated from the 3rd Marine Regiment. 1st Battalion, 3rd Marine Regiment, became the regiment’s new littoral combat team. The regiment is described by the Corps as a “self-deployable, multi-domain force” that is “relatively easy to maintain and sustain as part of a naval expeditionary force.” It is anticipated to be made up of roughly 2,000 Marines and sailors split up into a combat logistics battalion, a littoral anti-air battalion, and a littoral combat team which will include an infantry battalion and anti-ship missile battery.

And while the regiment and littoral combat team are still relatively new, senior Marine leaders say that it’s already made an impression.

“Adversaries do not like this concept at all,” Gen. Eric Smith, assistant commandant of the Marine Corps, said in March according to Marine Corps Times. “They don’t like the fact that units are highly mobile, that they have a low signature, and that the adversary doesn’t know where these things are.”

At the range on Oahu, the three Bravo Company leaders discussed what’s changed since the 3rd MLR was activated, and what’s stayed the same. “Your good fire teams make good squads, your good squads make good platoons, your good platoons make good companies … that hasn’t changed at all. The basics are still the same,” Richards commented. But the size of those squads and fire teams is a significant change, Vandalen said.

It’s a change in the practical sense. For example, Vandalen said loading two teams onto two combat rubber raiding crafts is easier than trying to fit three teams. Additionally, having fewer teams makes it easier for Marines to get more direct training and input from their leaders, he said. Whereas before, Vandalen said he was a squad leader overseeing 12 Marines, now he’s a team leader overseeing a team half that size. In the reorganization, some squad leaders were made team leaders within the littoral combat team.

“So I can take that skill, that experience, bring it down to the team level and essentially have that experience and skill pushed out further,” he said.

Not to mention that being able to operate that way will have a huge payoff in the Pacific’s jungle environments. Vandalen explained that they’re able to practice the team dispersion with those larger fire teams, which is “a lot more fluid” and makes protecting things like long-range sensors easier.

“Having that chain allows us to spread out more and then to be able to better cover more area and defend that area better,” Vandalen said. “Because we’re not necessarily able to be targeted and eliminated all at once. Each team will be separate, the squad will be separate, and coordinating within themselves.”

Vandalen added that he gets the sense some people don’t understand the purpose of changing the size of the fire teams, but from his perspective, “it really makes all those maritime operations and makes jungle environment operations … easier.”

Looking ahead, Capt. Patterson, the commander of Bravo Company, said the next change for their battalion will come as it works to integrate the medium missile battery, which was expected to be completed this month. It’s something that “really distinguishes us from a legacy infantry battalion,” he said. But at the end of the day, the regiment is still focused on the same priorities: fighting whenever and wherever they’re called.

“America’s perception of the ready 9-1-1 force is no different despite some of the [table of organization] changes and stuff that we’re going through. … So it’s a fine balance between preparing for the future and fighting tonight,” Patterson said, “but I think we’re doing a pretty good job of managing those two things.”