He qualified with a rifle. 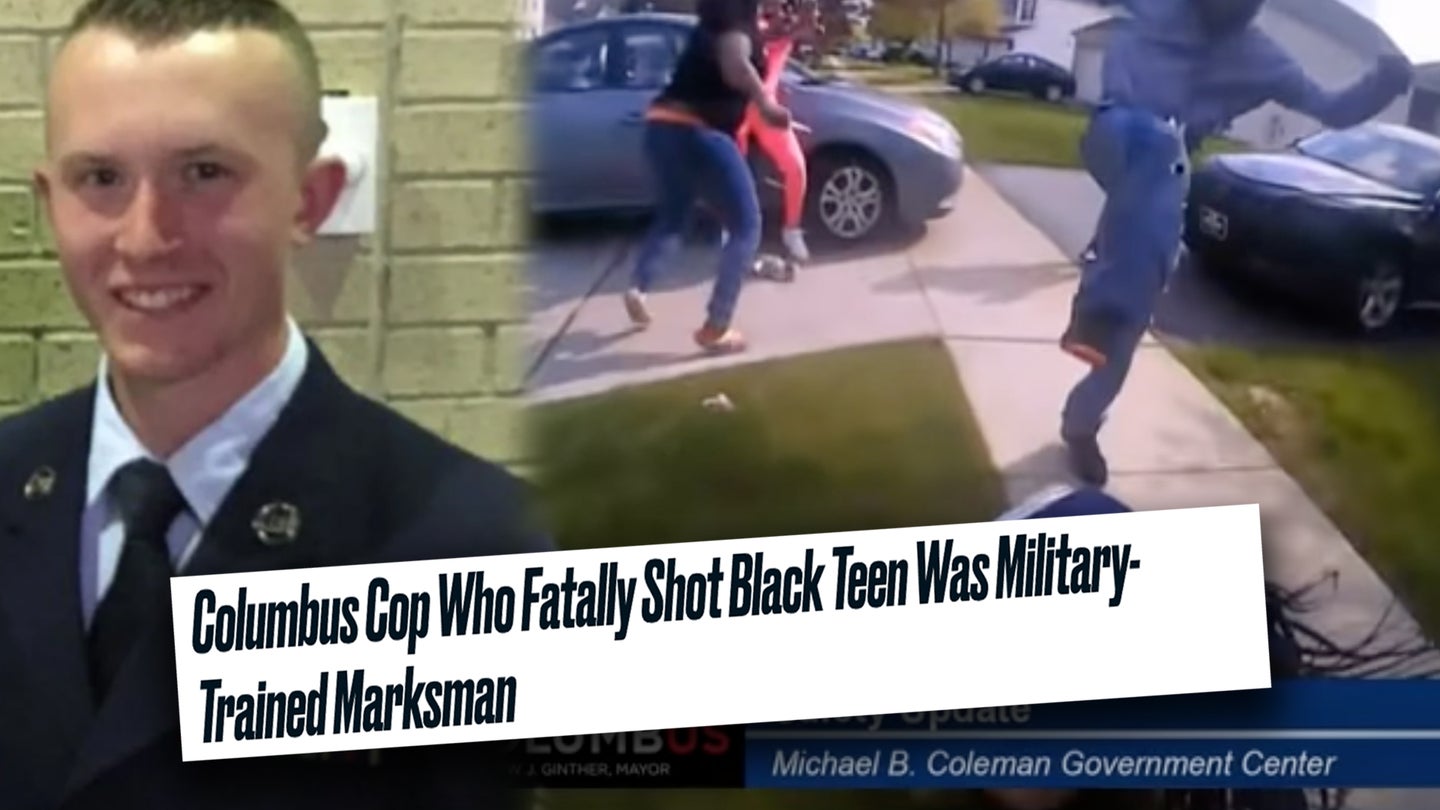 Nicholas Reardon’s military record before joining the police department in Columbus, Ohio, is not much different from that of hundreds of thousands of Americans.

Reardon was identified as the police officer who fatally shot 16-year-old Ma’Khia Bryant this week after responding to a chaotic 911 call concerning a person armed with a knife, a shooting that, coming on the heels of the Derek Chauvin verdict in Minneapolis, has sparked national outcry once again over American policing and the use of force. City officials on Thursday acknowledged the tragedy of a teenage girl’s death but added that “the video shows that there is more to this,” said Ned Pettus Jr., director of public safety. “It requires us to pause, take a close look at the sequence of events, and though it’s not easy, wait for the facts as determined by an independent investigation.”

Reardon, 23, is also a staff sergeant currently assigned to the 121st Security Forces Squadron of the Ohio Air National Guard. Yet the part-time Guardsman was portrayed as a “military-trained marksman” in a recent Daily Beast report that quickly went viral and was amplified by other media outlets (Daily Beast editors declined to comment on the record to Task & Purpose).

One article from the website Refinery 29, headlined “Why It Matters That The Officer That Killed Ma’Khia Bryant Had A Military Background,” emphasizes that Reardon went through basic training, learned Air Force values, fitness skills, and military discipline, although the article did not actually specify why these skills “matter” in the context of this shooting.

While factually correct, civil-military relations experts say the phrase “military trained marksman” implies Reardon has done something more than simply qualify with a rifle in the military, a skill that every service member learns that is essentially the same as knowing how to tie one’s boots or wear one’s helmet.

In reality, Reardon has served on a part-time basis as a so-called “citizen Airman” since 2015, like hundreds of thousands of people in the Air National Guard, and has a rather unremarkable military record: Two six month deployments, one inside the United States in 2016 and another overseas in 2019 to a non-combat zone; and two more stateside “contingency deployments” in November and December 2018. His awards and decorations do not include any personal decorations of note, according to Guard records provided to Task & Purpose, except for a reported small arms expert award signifying he successfully fired an M4 rifle and hit a target 25 meters away at least several dozen times. This is not a difficult task.

“Standard M4 training has nothing to do with shooting someone with a pistol and the use of ‘trained marksman’ is just a misrepresentation of reality,” said Jim Golby, a retired Army strategist and expert on civil-military relations. “It honestly just reeks of anti-military bias to me, and it seems like they must not have much understanding of what they’re writing about.”

So what is known about the shooting Reardon was involved in? Two 911 calls and footage from three officer body cameras released by city officials help piece together what happened that day. And footage later recovered from a garage across the street show events before the arrival of Reardon, who opened fire within seconds of getting out of his patrol car.

Reardon arrived on the scene about 10 minutes after a 911 call came in from a young, unidentified woman claiming someone was “trying to stab us.” Video from the garage and body camera show Reardon approach and ask a woman in pink, “what’s going on?” before Bryant pushes another woman to the ground in front of him. “Hey! Get down! Get down!” Reardon says. Bryant, with a knife visible in her right hand, then attacks the woman in pink and Reardon fires four shots.

It remains to be seen what is revealed in the investigation of Reardon’s behavior, but this case and others show that past military service is often mentioned in media coverage of criminal matters. The use of terms like “trained marksman” or “highly decorated” in media reporting can be technically accurate but deeply misleading. And its use goes along with the myth of the “dangerous veteran” with post-traumatic stress disorder that began to take hold among post-9/11 veterans nearly a decade ago, as the Department of Veterans Affairs warned.

“In such an environment, Veterans are often stereotyped by those with an unclear understanding of what it means to live with PTSD. And the fact is, there is no limit to the number of reasons why a person might choose to become violent,” the VA wrote back in 2012.

“Of course, we rarely—if ever—see articles hinting at a larger problem within the laborer field or the construction field. Likely, this is because we inherently understand that occupation or work experience doesn’t typically factor into a propensity for murder. Then again, headlines that scream, ‘Man [Wielding] Concrete Mix Charged with Murder: Hint of a Larger Problem?’ are likely not as profitable.”

Kori Schake, a former senior Department of Defense and State Department advisor, said the portrayal of veterans has turned more negative in the wake of the Jan. 6 Capitol attack, which has found some outlets emphasizing the “military connection” that is easily verified yet “negatively and inaccurately shapes public perceptions,” she said.

“There’s developed a widespread misperception that the insurrectionists were disproportionately veterans,” said Shake, who co-edited a book on civil-military relations with former Defense Secretary Jim Mattis. “But it’s also an unwarranted bias that veterans are more likely to be violent white nationalists or brutal cops,” Schake added, calling it “inexcusable.”

Despite the fact that over 50 veterans have been implicated in the Capitol riots, Schake says most have military backgrounds from decades ago that have little bearing on what they do now.

“Conflating military and veterans is the purpose of right-wing groups recruiting vets; they want to legitimize their ideology by associating it with the military,” Schake said. “But I don’t see why we should help them do that when there’s no indication that being a vet makes you any more likely to be an insurrectionist or a bad cop.”

Dear Media: A Veteran With PTSD Isn’t More Likely To Be A Mass Shooter