"Hovering a helicopter is very similar to standing up in a hammock while trying to rub your belly and pat your head at the same time." 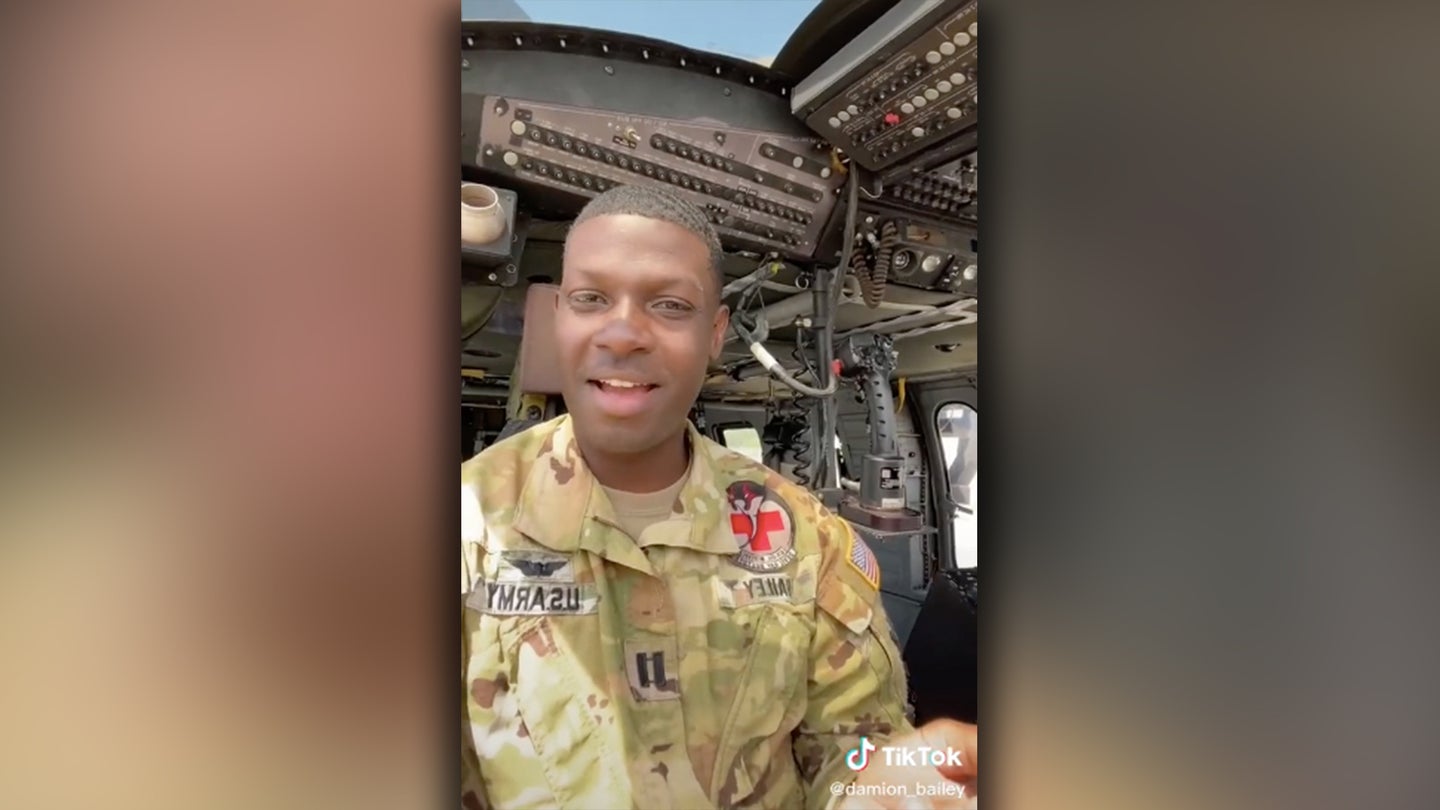 Somebody give Capt. Damion Bailey a teacher-of-the-year award, because he can take a complicated aviation topic and break it down Barney-style in a 54-second TikTok video.

At least, that’s the sense I get after watching the Army aviator teach the difficult task of hovering a Black Hawk helicopter while electronic dance music plays in the background.

“Somebody once told me that hovering a helicopter is very similar to standing up in a hammock while trying to rub your belly and pat your head at the same time,” said Bailey, a reservist who flies with the 5-159th General Support Aviation Battalion in Clearwater, Florida, in a TikTok posted on Tuesday. “And that’s pretty accurate.”

The reason why hovering a helicopter is so difficult is because there are so many aerodynamic forces at work at the same time, Bailey explained.

“Hovering is the most challenging part of flying a helicopter. This is because a helicopter generates its own gusty air while in a hover, which acts against the fuselage and flight control surfaces,” according to the Federal Aviation Administration’s Helicopter Flying Handbook. “The end result is constant control inputs and corrections by the pilot to keep the helicopter where it is required to be.”

Those corrections are especially important when you have commandos in the backseat who are trying to fast-rope to the ground below or when you’re winching up a medevac patient. Indeed, the exact balance required for hovering changes based on the wind speed, altitude, humidity, terrain, temperature and so many other factors that might flip at a moment’s notice depending on where you’re flying.

“You’ve got to balance everything perfectly,” Bailey said in his TikTok.

Despite the complexity of hovering, the controls used to accomplish the task are simple, Bailey explained. The first is the collective, a stick that is used to maintain altitude. You have to pull the collective up to get the helicopter off the ground, but you don’t want to pull too much or you’ll just keep ascending, Bailey said. Pull too little though, and you start sinking back to Earth.

“You’re going to have to finesse a little bit to figure out exactly how much you need to keep you at about 10 feet” off the ground, the pilot said. “That exact number is always going to change depending on how hot it is, how heavy the aircraft is and what altitude you’re at.”

After the collective, the next tool is the cyclic, which you need to keep steady to keep the helicopter from drifting left, right, forward or back. That takes some finesse too, Bailey said, but once you’ve nailed that, you have yet more variables to weigh, like what direction the wind is coming from. You also have to pay attention to your foot pedals, which determine which way the helicopter’s nose is pointing. It’s a lot to keep in mind, and that’s without distracting factors like hostile forces shooting at you or your fuel tank running low. Plus, any adjustment on one control means that you have to tweak the others as well.

“It is the interaction of these controls that makes hovering difficult, since an adjustment in any one control requires an adjustment of the other two, creating a cycle of constant correction,” according to the FAA.

So yeah, hovering is tough, which makes it all the more impressive when Army pilots like Bailey make it look so easy. It’s also to Bailey’s credit that he can distill years of pilot training into the most important elements so that knuckle-dragging reporters like me can understand it in a 54-second video. That shines in plenty of his other videos too, like the one where Bailey breaks down all the buttons and switches in a Black Hawk cockpit. There are dozens of inputs in there, and some of them Bailey identifies individually, while other, less-important ones he sweeps into a broad tent of “lots of radios and lots of navigation instruments.”