Sometimes, even the most well-meaning of tweets can come back to haunt you. 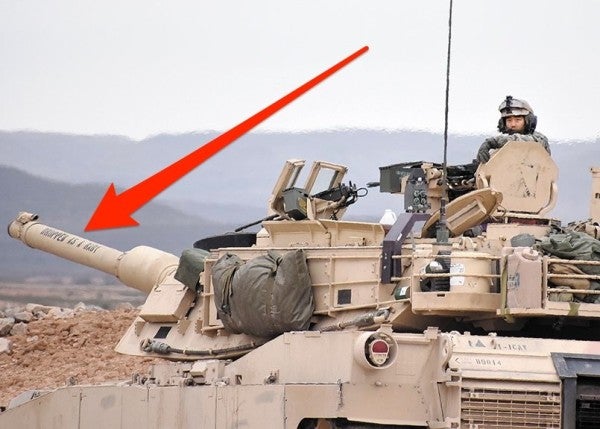 Sometimes, even the most well-meaning of tweets can come back to haunt you as a meme.

The 1st Armored Division out at Fort Bliss in El Paso, Texas tweeted a photo on Wednesday, which was almost certainly meant to stir pride — given the quote, “Commitment is an act, not a word,” complete with a “#WednsedayWisdom.”

But when that photo includes a tank and that tank has the name “Dropped As A Baby” painted on its gun, the Internet, quite frankly, doesn’t give a damn what the tweet’s intention was.

"Commitment is an act, not a word."
#WednesdayWisdom #IronSoldiers #Readiness pic.twitter.com/ufeOFkKFru

How far we’ve come from naming tanks “Big Punisher” or “Back With a Vengeance” as Stars and Stripes reported in 2003. And as Staff Sgt. Robert Pisciotta told Stars and Stripes all those years ago, “It’s not something you slap up there; you’ve got to put some thought and creativity into it.”

We couldn’t agree more. As our friend The Warax pointed out, the “best tank names are funny tank names.”

Godspeed to this tank’s crew; may the wind always be at your backs, and “Dropped As A Baby” ever fierce.

SEE ALSO: We Salute The Naked British Army Captain Who Escaped A Latrine After His Drunk Troops Locked Him In