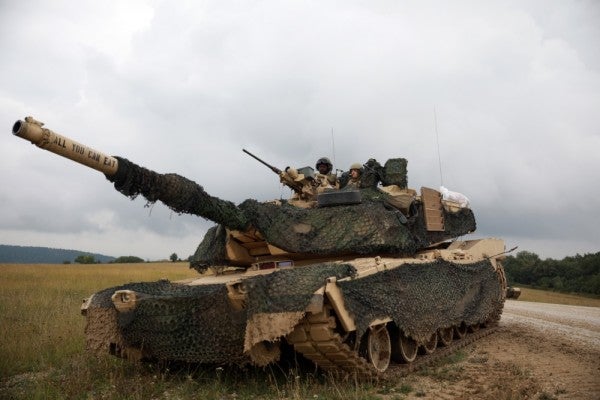 Along with protecting our nation and promoting American interests abroad, one of the Army’s most sacred responsibilities is to continue coming up with amazing names for their M1 Abrams tanks.

The list of brilliant titles stenciled by creative crews upon their 120 mm main gun tubes is long and treasured, including such legends as “Baby Yoda,” “Bye Felicia,” and “Crippling Depression.”

Now, a new champion joins the field, and it’s got an appetite.

“All You Can Eat” appeared earlier this month in an official Army photo of a live fire training exercise at Grafenwoehr Training Area, Germany.

The tank, a part of the 3rd Battalion, 67th Armored Regiment, 2nd Armored Brigade Combat Team, 3rd Infantry Division, is seen covered in green camo netting and looks ready to roll right into Golden Corral and eat the living daylights out of the Burger Bar.

And who can blame it? If I weighed nearly 70 tons and drove around foggy German fields firing depleted uranium shells all day, I’d want to eat everything in sight too.

Bravo, “All You Can Eat,” and bon appétit!