Small enough to fit in your pocket 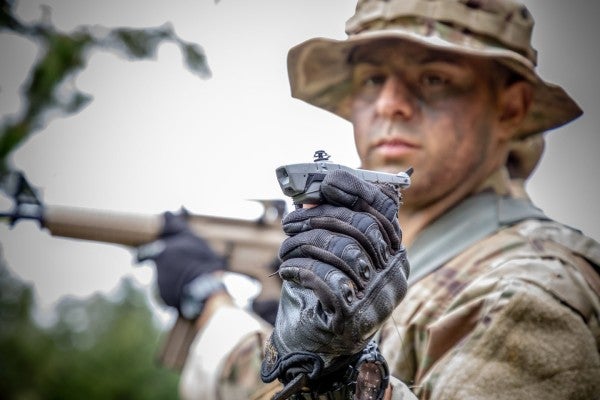 A drone that can fit in the palm of a soldier's hand will be flying with Army infantrymen sometime later this year.

The ultra-light Black Hornet Personal Reconnaissance System — known as a “nano-unmanned aerial vehicle” — will be fielded to Army platoons after the service awarded a $39.6 million contract to Flir Systems, Inc. on Jan. 24.

The drone, which is just over six inches long and weighs 1.16 ounces, can fly for 25 minutes in near silence and is so small it can fit inside a soldier's cargo pocket. That makes it perfect for soldiers on patrol who want to sneak a peak inside an enemy compound, over a wall, or even inside a window.

The rollout of Hornets will first go to just one (as yet unnamed) brigade combat team, before being sent to platoons throughout the other 35 BCTs in the Army, according to Army spokesman Lt. Col. Isaac Taylor.

Deliveries are expected to start in early 2019, according to a FLIR press release.

“This piece of equipment will give our soldiers operating at the squad level immediate situational awareness of the battlefield through its ability to gather intelligence, provide surveillance, and conduct reconnaissance,” Taylor said in a statement to Task & Purpose.

FLIR President and CEO Jim Cannon said in the press release that the contract “represents a significant milestone with the operational large-scale deployment of nano-UAVs into the world's most powerful Army.”