A team of Coast Guardsmen from Alameda, California, rescued two sea turtles who were ensnared in fishing wire and other... 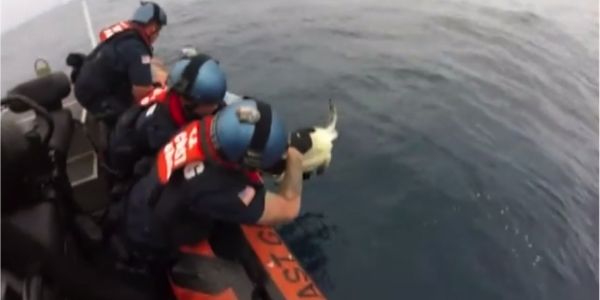 A team of Coast Guardsmen from Alameda, California, rescued two sea turtles who were ensnared in fishing wire and other debris in the eastern Pacific Ocean, according to a video recently posted by the Coast Guard that went viral on Reddit.

The rescue took place off of the coast of Central America in a known drug-transit zone, the Coast Guard release said. The Coast Guardsmen were responding to a report of a suspicious object in the water when they found the turtles.

The video shows the Coast Guardsmen surprised when they realize it’s actually two turtles ensnared together. According to a report from Seattle’s NBC affiliate, which interviewed some of the crew members, the turtles were approximately 70 pounds each.

“There was no question what we had to do,” Petty Officer 2nd Class Hylan Rousseau told the station. “And no one spoke a word. We immediately moved in to rescue mode.”

They freed the first with relative ease, but the second sea turtle had fishing wire around its neck.

“The second, and much larger turtle, was quite literally choking to death,” Chief Petty Officer Brian Milcetich told the station. “He had been trying so hard to free himself from the fishing line that he had cinched the line around his own neck.”

The Coast Guardsmen freed the second turtle with a pair of medical shears. The video shows the turtle spit up water upon being able to breathe, take a deep breath, then dive into the water.

These Coast Guardsmen may have been expecting to find drugs, but quickly pivoted into a wildlife rescue mission, and their actions almost certainly saved the lives of these two creatures. Watch the video below.