The Coast Guard Art Program brings several big events from the service to life via paintings and other works. 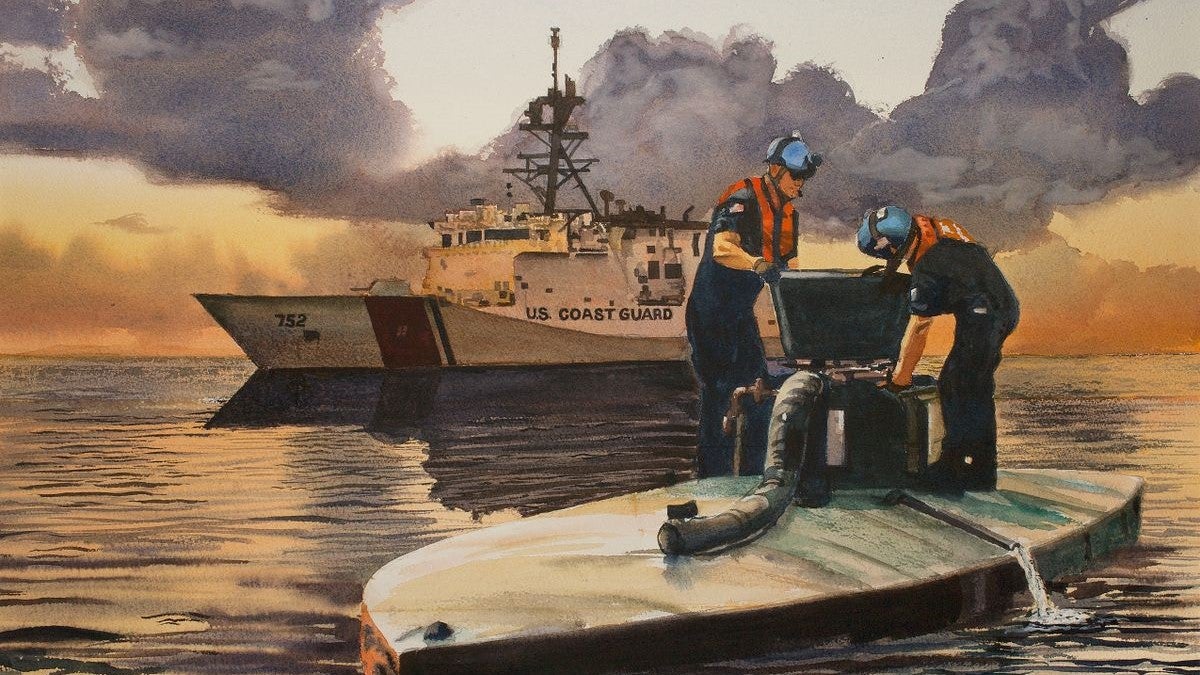 The summer of 2015 was a big year for the U.S. Coast Guard. As seasonal drug smuggling operations heated up during the summer, the Coast Guard’s cutters and other ships managed to capture a record breaking amount of cocaine and other narcotics en route to the United States. In August that year, the Coast Guard cutter Stratton came back to port with a massive haul. It unloaded more than 66,000 points of cocaine, valued at more than $1 billion, dropping the prize at San Diego Naval Base.

The painting, by Charles Van Horn, depicts in watercolors a July 18 operation by the USCGS Stratton. The ship, a long-range cutter that was on a four-month mission, spotted a “semi-submersible” vessel. The 40-foot-long drug vessel was essentially skimming along the surface of the water, part of it above the waves while traveling toward the United States. The Stratton was able to spot it and reach it in the open seas. In Van Horn’s painting, two Coast Guardsmen stand on top of the submersible, unloading the stored cocaine. The watercolors give the painting a softer touch, although the artist has a very realistic style. The submersible was loaded with 16,000 pounds of cocaine and the Stratton’s crew was able to get 12,000 off the vessel before it sank.

The July 18 operation was the biggest such capture out of the record breaking haul the Coast Guard hit that summer.

Van Horn’s watercolor one of several Coast Guard successes and moments captured on canvas as part of the U.S. Coast Guard Art Program. The program has been running for more than four decades, as a kind of public relations and outreach move to boost the Coast Guard’s image. It’s done in conjunction with the New York-based art center the Salmagundi Club. Pieces are displayed at museums and libraries. Currently there are just shy of 2,000 works in the collection, but the Coast Guard says most are paintings. In July the program celebrated 41 years.

Recently the Coast Guard uploaded several works from recent years to the Defense Information Visual Distribution Service or DVIDS. Along with the painting of the 2015 cocaine seizure, Some are more scenic works, depicting lighthouses or ice drilling, while others are more action-oriented.

Frank Gaffney’s “Stopping a go-fast” is an in-the-moment painting of the Helicopter Interdiction Tactical Squadron flying over a drug smuggling boat, with the viewer’s eyes almost in line with the sights of the Coast Guardsman’s gun.

Others pay tribute to some retired service members. John Ward’s “Last Flight” is an acrylic painting of two of the Coast Guard’s rescue swimmers in action, picking up someone in need. The Coast Guardsman on the right retired after 21 years of service.