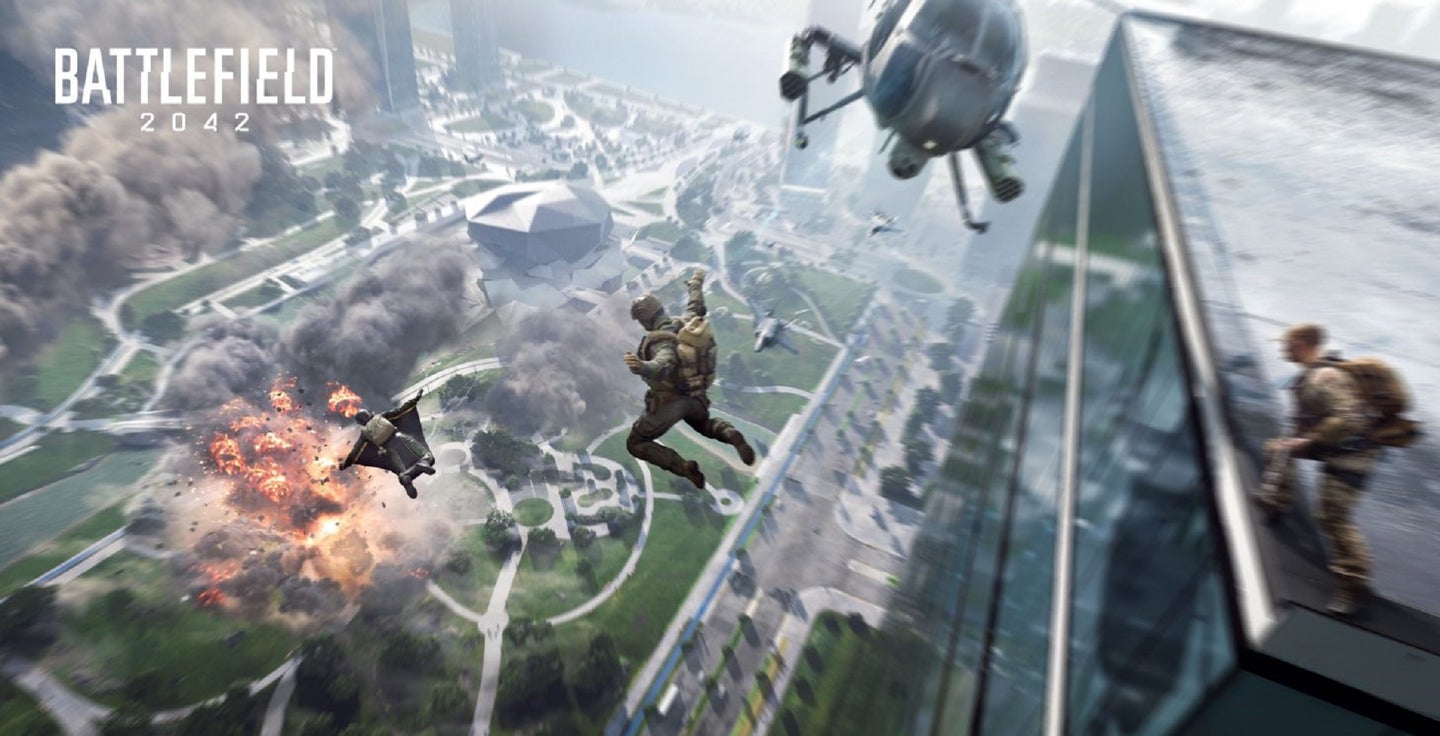 Titled Battlefield 2042, DICE and EA’s newest installment in the franchise comes after several attempts to send players back in time, first to World War I with Battlefield 1, and then to World War II with Battlefield V. While both games offered something new, neither seemed to scratch the itch that some players had from giving up modern combat in favor of bayonet charges and old-school dogfights. Then there were all the bugs, the bizarre class changes, and cartoonish characters that made the games feel a bit underwhelming and somewhat rushed, particularly Battlefield V. And while DICE and EA were trying to ship players off to one world war or another, they created a gap that competitors, like Activision and Infinity Ward, were able to exploit with Call of Duty: Modern Warfare, at least for a time.

In light of all that, it almost feels like the developers have decided to play it safe and hit refresh on their last great game — Battlefield 4 — by giving players a slightly updated version of it, one that’s built for next-gen consoles and gaming PCs. Just check out the new trailer for Battlefield 2042, which is set to release on Oct. 22 for Xbox One, Xbox Series X|S, PlayStation 4, and PlayStation 5, and PC.

Battlefield 2042 will mark a return to the “iconic all-out warfare of the franchise” reads the game’s official site, and will support as many as 128 players on a host of maps which, based on the trailer, cover a range of environments from cities to deserts and likely a mix of both on each map — with small towns and buildings and open spaces where players will be forced to change up their tactics and loadouts depending on where they are during a given portion of a game. (This has always been one of my favorite parts of Battlefield games. Depending on what objectives your team holds during a conquest match, you might want to spawn with your sniper loadout if you’re going to hide out in an elevated area and pick off attackers, or maybe you’ll want to go with an engineer class and hop into a tank as you bulldoze your way toward the enemy’s spawn to bottleneck them and give your team some breathing room to cap another point.)

The game’s site hints at some additional features beyond the typical Battlefield fare, one of which is called Hazard Zone, where players will drop in for “an all-new, high-stakes multiplayer experience.” Now, if you read between the lines and think about the exploding popularity of other first-person shooters like Fortnite and Call of Duty: Warzone, it seems plausible that it might be some kind of battle royale game mode. However, EA has said that they have no plans to include that game mode, so that kind of puts the kibosh on that. The third feature is [Redacted] and is simply billed as a “love letter to our fans, coming to Battlefield 2042.” Updates on that are expected to arrive on July 22.

Destructible environments are also here to stay, as are some new features like map-specific environmental hazards. From the game’s in-depth FAQ page: “You’ll experience ever-changing battle conditions and gameplay challenges on the Battlefield 2042 maps. Adapt on-the-fly to dynamic events and storms, such as sandstorms in the deserts of Qatar, a rocket launching from French Guiana’s Space Centre, and tornadoes threatening South Korea’s concrete jungles.”

And then there’s the host of new weapons which are simply too numerous to identify and name here, though we’re certain to get a better look at what’s in store as the game comes closer to launch. I, for one, am holding out hope that Battlefield 2042 will include some new small arms that are currently in development or being tested, like Sig Sauer’s Next Generation Squad Weapon prototypes. That’s standard fare for the series, which featured the XM25, a grenade launcher that had seen limited use by U.S. troops in Afghanistan at the time of Battlefield 4’s launch, even though the program ultimately had its funding cut due to real-life issues.

Now, if I’m being honest — and I am — my initial reaction to the trailer was basically: Huh, this looks like Battlefield 4, but with a new coat of paint, a few new toys, and a nice next-gen console finish. And I’m totally cool with that. The reason: If this game is, at the very least, an updated version of Battlefield 4 — once all the bugs were worked out — then it’ll end up being my go-to first-person shooter for the immediate future. Think about all the things that game had to offer: Massive and distinct maps, and an even wider array of weapons to fit your playstyle, not to mention all the in-game mechanics that you could leverage to suit your needs, like knowing that you could pop your bipods out on an LMG and suppress a sniper, throw off their aim, and buy a few seconds for a teammate to move in and clear that camping bastard out from his hiding spot on top of a crane.

Plus, there’s the cheese: The absurd reality-breaking acts of heroic gameplay that only the Battlefield franchise, particularly its modern-era games, have been able to deliver. You know, stuff like tossing a bunch of C4 on a bike or jeep and riding it into a tank as you jump away at the last second and set it off. (That ‘Click’ *BOOM* combo is just so damn satisfying.)

Based on the trailer, Battlefield 2042 knows this about its players and isn’t hiding from it. At one point in the clip, a soldier drives an ATV off a ramp and into a helicopter, then seconds later, a pilot ejects from their jet, whips out an AT-4 and fires a rocket at another jet — mid-air — and destroys it before landing back in the cockpit of the aircraft while it’s stalling out. Both are things that actually happen in Battlefield, and only in Battlefield. Do not try this in real life. You will die.

This franchise is not about realism, and this newest installment seems to embrace that tradition. If you wanted a realistic military first-person shooter the game would involve standing post for hours straight, getting yelled at for the color of your socks, filling sandbags, long exhausting patrols, and maybe a brief firefight — at which point you’d get shot and have to be casevaced. Or it’d go off without a hitch and you’d get back to base where your first sergeant would get a Bronze Star for filling out paperwork, and the squad would have to go stand post again. End match.

However, if you want to have fun, this might be good for it. That’s where Battlefield games thrive; when they deliver pure, unadulterated clicky, twitchy, campy joy. And after a run of disappointing games — looking at you, Battlefield V — it looks like the franchise is going back to its roots and what it does best: Massive battles, destructible environments, tons of cheese, and an arsenal of heavily customizable weapons. I am definitely going to give it a shot when the game hits consoles and PCs in October.

Update: This story has been updated to note that EA and DICE aren’t as hot for the Battle Royale game mode as we may have first thought…