Tanks, Zeppelins, Bayonets. New Battlefield 1 Trailer Has It All

“Dig deep, boys!” One of the few bits of dialogue in the recent “Battlefield 1” gameplay trailer, it’s also a... 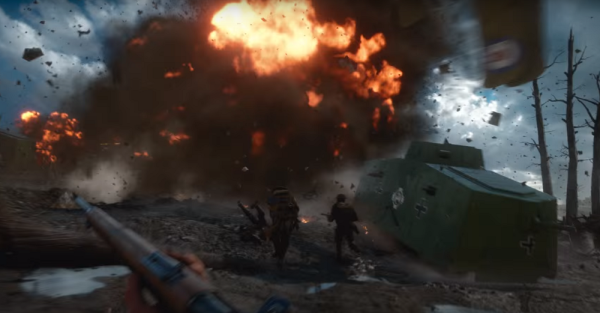 One of the few bits of dialogue in the recent “Battlefield 1” gameplay trailer, it’s also a good piece of advice for gamers anxiously awaiting Electronic Arts’ highly anticipated World War I first-person shooter.

The latest trailer, which was posted on June 12, focuses on the gameplay, which looks incredible. The trailer features tanks, biplanes, artillery, zeppelins bristling with turrets, and even a clip of an ill-fated cavalry charge against an armored train. You can see men running through trenches, dilapidated and burning buildings as they fire trench shotguns and early submachine guns. At one point, a guy gets skewered during a bayonet charge.

Unlike many tactical first-person shooters, this newest addition to the Battlefield franchise is the first to be set during World War I. As such, the game designers seem to be putting a premium on intense close-quarters combat in a massive war zone, where a brutal battle can be disrupted by clouds of mustard gas, or a flaming airship falling from the sky before exploding on impact.

“Battlefield 1” is set to release later this year, but in the meantime, check out the gameplay trailer and get amped up for what’s in store.