10 Things You Never Knew About ‘Band Of Brothers’ 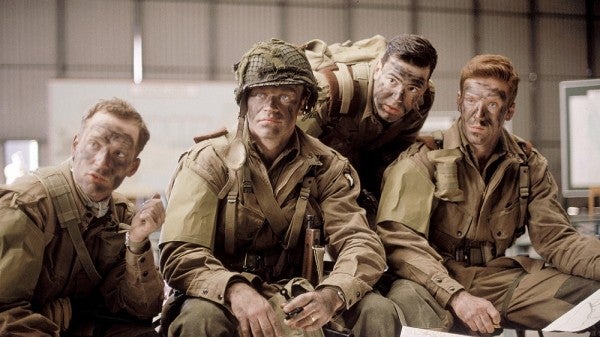 HBO's World War II miniseries “Band of Brothers” follows the men of Easy Company, part of the 506th Parachute Infantry Regiment, 101st Airborne Division, from their training at jump school, to the airborne landings in Normandy, the Siege of Bastogne, and all the way to Hitler's mountain retreat.

Based on the book with the same name by Stephen Ambrose, the show is a dramatized retelling of actual events and follows a group of elite and battle-hardened paratroopers as they fight across Europe, far behind enemy lines, with only each other to rely on.

The critically acclaimed 10-episode miniseries won a slew of awards including a Golden Globe for Best Miniseries or Motion Picture Made for Television, and inspired a second “Band of Brothers” series in 2010, which follows the U.S. Marines in the Pacific theater of the war.

To ensure historical accuracy, the series drew from Ambrose's story, as well as memoirs and personal accounts from Easy Company soldiers. Each episode opens with interviews from the men who fought in some of the war's most brutal and unforgiving battles.

This show made a lot of people's careers.

This cast is full of actors who have gone on to become major stars since it came out. From Tom Hardy to Michael Fassbender, Simon Pegg, Damian Lewis, and James McAvoy, “Band of Brothers” introduced audiences to a whole host of talented actors.

Creating “Band of Brothers” was an enormous and expensive undertaking.

The miniseries, with a budget of $120 million, took three years to make and was filmed on a 12-acre set that was continually modified to represent 11 different European locations. If you want a comparison for scale: That's five times the size of the set for “Saving Private Ryan.“

HBO had an army of extras.

According to the behind-the-scenes film, “The Making of 'Band of Brothers,” there were 10,000 extras, 500 speaking roles, and a massive wardrobe department that supplied detailed and authentic uniforms, including 500 pairs paratrooper jump boots manufactured to fit the original Army specifications.

“Band of Brothers” had more explosions than “Saving Private Ryan.”

By the time they finished filming the third episode, the special effects department had gone through more pyrotechnics than was used in the entire production of “Saving Private Ryan,” and they still had seven episodes left to film.

They went through a ton of ammunition.

According to “The Making of Band of Brothers,” a heavy day of filming required up to 14,000 rounds of ammunition, and the set had an arsenal of 700 authentic World War II weapons and 400 rubber prop guns.

The set doubled as a tank factory. No really, they made tanks.

The crew repurposed a T-34 Soviet medium tank from the set of “Saving Private Ryan” and remodeled it to make it look like a tiger tank, and built an additional five tanks and rented four.

The actors went through a mini-jump school.

A video diary by actor Ron Livingston chronicles the multi-step training process the actors underwent to learn how to simulate a jump from an aircraft. First, they jumped from three-foot crates onto sand, and then from ramps. Next the actors were placed into a harness so they could get used to how it would feel to jump with a parachute. Finally, to simulate the jump into Normandy, the actors leapt from a 40-foot-high prop aircraft while wearing wires connected to a harness.

In the third episode, Pvt. Albert Blithe, played by Marc Warren, is shot in the neck, and is last seen in a hospital ward. Blithe survived the war, and stayed in the Army, going on to serve during the Korean War according to Together We Served.

One of the sets was a man-made forest inside of an airplane hangar.

The art department constructed the set that was used for the Siege of Bastogne inside a massive airplane hangar using real trees as well 250 fake trees that the special effects department made from fiberglass, hemp, latex and foam.

Not only did the crew create a forest, they had to make it look like it was snowing.

It took four weeks to cover the set with fake snow created from paper and plastics to get a mix of snow, from flakes, to slush.