5 Things You Never Knew About ‘The Pacific’

“The Pacific,” the 2010 award-winning HBO series, followed the men of the 1st Marine Division during the brutal Pacific Campaign... 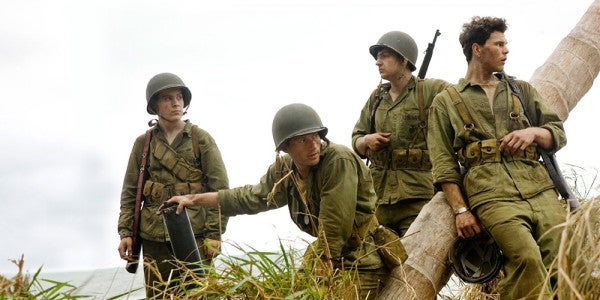 “The Pacific,” the 2010 award-winning HBO series, followed the men of the 1st Marine Division during the brutal Pacific Campaign of World War II.

Produced by Steven Spielberg, Tom Hanks, and Gary Goetzman, the 10-episode series focuses on the Marines as they fight from Guadalcanal, to Peleliu, and Okinawa. Their war is one of brutal and unforgiving jungle combat against a determined enemy. When they finally return from the war, they must reconcile what they did to survive in combat with the black-and-white notions of right and wrong that exist at home.

The series was well-received by critics, and though there were some critiques that it lacked the continuity of “Band of Brothers,” which closely followed one company throughout the war in Europe. Still, for many current and former Marines, we have a soft spot for it, in part because some of the Corps’ greatest legends — like John Basilone and Chesty Puller — were principal characters.

Related: 10 Things You Never Knew About ‘Band Of Brothers’ »

For other fans of the show, here are five things you probably didn’t know about HBO’s “The Pacific.”

It is the most expensive miniseries ever filmed.

According to a 2010 article in the Hollywood Reporter, “The Pacific” ended up costing roughly $217 million, making it the most expensive miniseries ever filmed, and that doesn’t even take into account the extra $10 million that went to marketing.

The cost isn’t surprising when you consider the size and scope of some of the scenes, or that they were “shooting off pyrotechnics every day for almost a year straight,” Joss Williams, the show’s pyrotechnics expert, told the Hollywood Reporter.

The actors went through a mini-boot camp, even training for beach landings.

It’s a good thing they trained too, because the Peleliu beach landing scene was such a complex and expensive endeavor it came out to $13,500 per take. To make sure none of that cash went to waste, the series’ senior military advisor, Dale Dye, had the actors and extras up every morning at 0500, working out, marching with full gear.

“We’re a bunch of actors,” Joe Mazzello who played Eugene Sledge explained in an HBO interview. “We get up before 11 every morning. We thought it was going to be, like, make your bed, do a little running. … but we were in the middle of a jungle carrying 40 pounds of equipment on our backs. We were digging ditches, getting screamed at.”

Filming of “The Pacific” temporarily stalled due to widespread food poisoning.

Production came to an abrupt halt in 2008 thanks to a catered breakfast of bacon and eggs. While filming in Victoria, Australia, as many as 30 cast and crew members became ill from salmonella poisoning and five required medical attention at a local hospital, with one admitted. That’s why you stick to issued rations, guys.

The show is based on several books written by Marines portrayed in the show.

The miniseries is based on “Helmet for My Pillow,” by Robert Leckie, and “With the Old Breed,” by Eugene B. Sledge, both of whom are principal characters in the show. Additional material was drawn from “Red Blood, Black Sand,” by Chuck Tatum, and “China Marine,” another book by Sledge.

“The Pacific” went to great lengths to show how that campaign impacted the men.

“The Pacific” is as much about the military campaign and the battles as it is about their lingering impact on the Marines who fought them. The series sees Eugene Sledge transform from a naive idealist to a hardened Marine, as well as Robert Leckie, who struggles continuously to keep from falling apart, physically and mentally.

“It was very important for us to show how this war affected these men, during the war, after the war,” explained Gary Goetzman, an executive producer on the show. “That really was something we didn’t get into in ‘Band of Brothers.’”