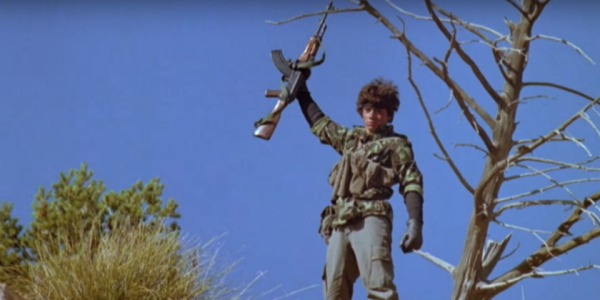 No film better encapsulated the patriotic fervor of the Reagan era than John Milius’ 1984 cult classic “Red Dawn.” It’s a flag-waving, National Anthem-singing, gun-clutching, commie-killing masterpiece of propaganda that spoke to the hearts of every red-blooded American who spent the Cold War fantasizing about the day their love of country would be put to the ultimate test.

When the film begins, our heroes — a group of high school students calling themselves “Wolverines”— retreat into the wilderness after Soviet paratroopers descend on their small Colorado town. The year is 1989 and World War III is underway. Thanks to the Second Amendment, the Wolverines are able to launch an armed insurgency against the communist invaders. The stakes are high: A third of the United States is under Soviet control and civilians are being massacred in droves. The ensuing battle for America’s future is bloody — so bloody, in fact, that upon its release “Red Dawn” earnedcondemnation from the National Coalition on Television Violence as the most violent movie ever made.

Of course, the world is a much different place in 2017. As far as film violence goes, “Red Dawn” is laughably mild compared to what is currently considered acceptable. Also, the Russians might be our friends now. We’re not sure. Still, the film’s legacy lives on. In 2009, the National Review included “Red Dawn” on its list of “Best Conservative Movies of the Last 25 years,” and there was enough hype around the 2012 remake starring Chris Hemsworth to help the film gross more than $48 million, despite terrible reviews. Maybe “Red Dawn” was just too much a product of its time to make much sense in the post-Cold War world, but it’s still a timeless film.

Here are eight more interesting behind-the-scenes facts about “Red Dawn” that may deepen your appreciation of the film — or at least help prepare you for your next trivia night.

1. An actual military operation was named after the movie in 2003. The U.S. military mission that led to the capture of Saddam Hussein in 2003 was codenamed Operation Red Dawn. “Operation Red Dawn was so fitting because it was a patriotic, pro-American movie,” Army Capt. Geoffrey McMurray, who picked the name,told USA Today.

2. In 1984, tensions between the U.S. and the USSR were so high that the Soviets boycotted the Summer Olympics in Los Angeles, citing security concerns as the primary reason. “Chauvinistic sentiments and an anti-Soviet hysteria are being whipped up in the [United States],”read a statement released by the Soviet National Olympic Committee when the boycott was announced. The fact that “Red Dawn” premiered that year probably didn’t help alleviate their fears.

3. “Red Dawn” was directed by John Milius, who at the time was best known as the screenwriter of “Apocalypse Now.” In his 20s, Milius tried volunteering for military service during the Vietnam War, but was rejected because he had asthma. “It was totally demoralizing,” helater recalled in an interview. “I missed going to my war. It probably caused me to be obsessed with war ever since.” Milius was known to carry a loaded pistol with him on set,according to IMDB. He was alsothe inspiration for John Goodman’s character in “The Big Lebowski.”

4. The “Red Dawn” remake was filmed in 2009, but didn’t premiere until 2012. Part of the reason for the delay was the decision to cast China, instead of Russia, as the villain. This raised serious concerns among potential distributors, who feared the choice would alienate the Chinese market. As a result, Chinese flags and military symbols were digitally erased from the film and dialogue was altered. When the film finally premiered, North Korean troops made up the bulk of the invading force. In a 2014interview with Crave, Milius said he hadn’t seen the remake and had no intention of ever seeing it. “I don’t think there’s many kids sitting around thinking about Korea landing on our schools,” he said.

5. The cast of the original “Red Dawn” underwent eight weeks of military training before filming began. The movie’s technical advisorwas quoted in the film’s production notes saying, “we took them out into the hills and ran them from sunup to sundown.” Patrick Swayze, who played the leader of the Wolverines, was also quoted saying, “I learned things I shouldn’t know. I know how to make bombs out of household good,”according to AMC.

6. “Red Dawn” is rated PG-13 thanks to Steven Spielberg. Up until 1984, there were only four film ratings: G, PG, R, and X. Spielberg changed that with a phone call. “I remember calling Jack Valenti and suggesting to him that we need a rating between R and PG, because so many films were falling into a netherworld, you know, of unfairness,” Spielbergtold Vanity Fair in 2008. “Unfair that certain kids were exposed to ‘Jaws,’ but also unfair that certain films were restricted, that kids who were 13, 14, 15 should be allowed to see.” The first film to receive the PG-13 rating? “Red Dawn.”

7. “Red Dawn” launched the careers of Patrick Swayze, Lea Thompson, Jennifer Grey, and Charlie Sheen. In fact, it was Sheen’s first feature film. However, in 1987, Sheen told ET that he wasn’t all that impressed with how “Red Dawn” turned out. “The film is such a comic book,” he said. “It was such a great concept on paper, but I think if Milius had paid more attention to his actors than his tank, we might’ve had something. I thought it was detrimental to the final outcome of the film.”

8. A key scene may have been deleted because of a real-life mass murder. The original trailer for the film included a scene of a tank rolling up to a McDonald’s where enemy soldiers are eating, according to IMBD. It’sspeculated that the scene never made the final cut because of the so-calledSan Ysidro McDonald’s massacre. On July 18, 1984, a 41-year-old man named James Huberty walked into a McDonald’s in the San Diego neighborhood of San Ysidro and shot and killed 21 people and injured 19 others.