On Jan. 20, six gunmen armed with AK-47s and grenades stormed the Intercontinental Hotel in Kabul, Afghanistan. Over the next... 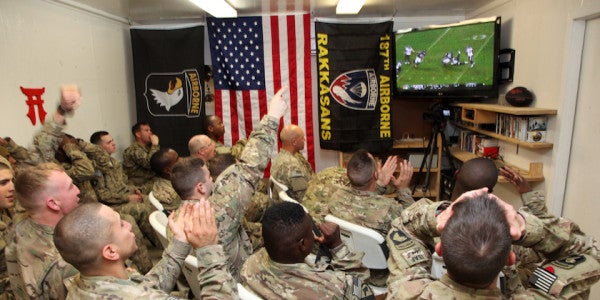 On Jan. 20, six gunmen armed with AK-47s and grenades stormed the Intercontinental Hotel in Kabul, Afghanistan. Over the next 14 hours, the assailants waged a fierce battle with Afghan security forces that left 43 people dead, according to local news. It was just one of multiple attacks across the country over the weekend, as U.S.-led forces increase their efforts against an increasingly brazen insurgency. But the Pentagon was scrambling to avert another crisis: rescuing tens of thousands of troops overseas from the threat of missing an NFL conference title game on TV.

Maybe White House Press Secretary Sarah Sanders was expressing genuine concern when she sounded the alarm on Saturday, posting a photo to Twitter of a television screen displaying a message that read “Due to the government shutdown, [American Forces Network] services are not available.” The disturbing image, Sanders said, came to her that morning from a “young infantryman serving in Afghanistan.” Almost certainly, tears were in Sanders’ eyes when she tweeted the image with the note: “Sad that the men and women who have sacrificed so much are deprived of even the most basic connection to home bc Democrats are playing political games.”

I received this from a young infantryman serving in Afghanistan this morning. Sad that the men and women who have sacrificed so much are deprived of even the most basic connection to home bc Democrats are playing political games. #SchumerShutdown pic.twitter.com/jcUqU2crF1

Of all the negative ways a government shutdown could affect the military — delayed paychecks, postponed medical treatments, daycare and school closures, suspended funds for the families of troops just killed in action — the prospect of soldiers losing some supposed right to live playoff football (and, of course, AFN’s other world-class programming) appears to have caused Sanders the most grief.

It’s important to remember why the word “sacrifice” has long been used to describe military service. First and foremost, it references risk of death; troops sacrifice their own personal safety to fight for a cause bigger than themselves. When a service member is killed in combat, we say he or she made “the ultimate sacrifice.” Nearly 7,000 American troops have made the ultimate sacrifice in Iraq and Afghanistan since the start of the War on Terror. But service members also sacrifice time with loved ones. They miss birthdays and graduations and funerals. They come home after being away for six or 12 or 15 months and have to reacquaint themselves with the most important people in their lives. That’s tough, especially during a time of war. As a country we accept that there are men and women making these sacrifices on our behalf every day. Is a Sunday without live football really where we draw the line? Or is it that we’re more concerned about what our troops represent than what they actually do?

In my darkest moments, when I’m gripped by all that that Afghanistan seared into my brain — recollections of broken bodies and little kids leaking blood from shrapnel wounds — I am never visited by the specter of all the NFL games I didn’t get to see. If I were, I probably would’ve jumped off a cliff a long time ago, because in the 12 months I was deployed I saw approximately zero football.

Why? I was busy being a soldier in a war zone: getting shot at, shooting at people, not sleeping, not showering, shitting in dirt holes, re-dipping Copenhagen, and guard duty. I counted the days until my platoon rotated back to the FOB, but not in anticipation of a 24-hour AFN-viewing marathon. Given the choice between watching TV and Skyping with my family, taking a shower, or getting more than three hours of sleep, TV lost. AFN is a great and important resource, but it’s also operated by the military and primarily used as a mouthpiece for the brass. On downtime, what I needed was a real connection to home — not a broadcast that was as home-cooked as the Rib Shaped BBQ Pork Patty MRE.

Everyone’s deployment experience is different. The majority of deployed troops spend most, maybe all, of their time on the FOB. I’m no stranger to that plight. During my first deployment, to Iraq, I left the wire maybe a total of three times. It wasn’t the best 15 months of my life, but the Second Battle of Fallujah it certainly was not. We had all the amenities: Green Beans, A/C, a 24-hour gym, beds, internet, surf n’ turf Fridays, salsa nights at the MWR — you name it. Yes, some of us took it for granted. We grumbled when the soft-serve machine in the chow hall ran out of vanilla. We huffed when someone forgot to wipe their sweat off the rowing machine. We threw our Xbox controllers against the wall when somebody beat us at Madden. But God forbid if some dog-faced grunt on a 24-hour refit ever overheard one of us complaining. Because even the most aloof among us understood that it could’ve been a lot worse.

We were fully conscious of the fact that while we were huddled around the TV on Sundays, there were soldiers getting paid the exact same amount of money as us to kick down doors and shoot terrorists. They were doing what most of us stuck on the FOB expected we would do when we raised our right hands and volunteered to serve during a time of war. We didn’t join the military to watch football. We joined to play ball.

Nevertheless, the Department of Defense jumped into action soon after Sanders tweeted her rallying cry. In a statement, chief DoD spokeswoman Dana White explained that the Pentagon had “determined the operational necessity of television and radio broadcasts constitutes essential activities.” Despite the government shutdown, two of AFN’s eight channels would remain on: news and sports. “Sports broadcasting is not an essential activity and stopped to comply with the shutdown,” White said. “With minimal manning, we can keep the sports channel up without incurring any additional cost or manpower — complying with shutdown guidance.” Sports TV: not exactly essential, but essentially baked in.

Just in the nick of time. Imagine the looks on the troops faces when they flipped on the television in Afghanistan on Sunday and saw the Patriots playing the Jaguars in high-definition, welcoming Jim Nantz’s play-by-play commentary like sweet sweet music. Hooray for the Department of Defense.

Also on Sunday, military officials told The Washington Post that the DoD may soon dole out deployment orders to Afghanistan to increase the total force in the country by as many as 1,000 troops this spring. Football season will be over by then. But, hey, fighting season will just be getting started.