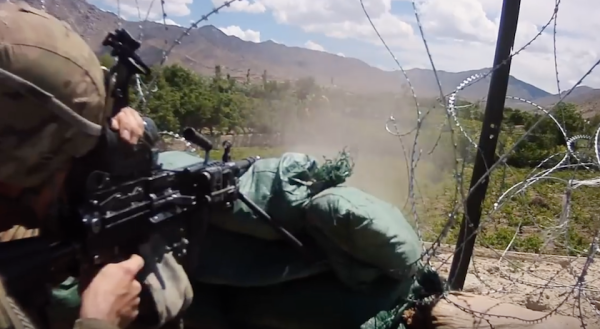 Last year, actor-turned-filmmaker Ricky Schroder, released a documentary called “The Fighting Season,” which chronicles the U.S. military’s efforts to bring the war in Afghanistan to a close after 13 years of grueling counterinsurgency operations.

Now, Schroder has released a six-part followup series, titled “My Fighting Season.” All of the combat footage that appears in the series was pulled from helmet cameras worn by frontline soldiers in Afghanistan. The result is what Schroder has confidently described to Deadline as “the most realistic combat experience on the modern day battlefield ever shown.”

The first episode, titled “Hunting Ghosts,” covers one day with paratroopers of the 1st Brigade Combat Team, 82nd Airborne Division deployed to Afghanistan's Ghazni Province in 2012. It will air on July 5 on DirectTV's Audience Network. Judging by the trailer, it’s going to be one hell of a series. Take a look.

Correction: The original version of this article incorrectly stated that the first episode of “My Fighting Season” will air on June 28. It airs on July 5. The article has also been updated to specify that the first episode will focus on paratroopers with the 82nd Airborne Division who were deployed to Afghanistan in 2012.