This Might Be The Definitive War Doc About Medics In Afghanistan

When people find out that I used to be an Army combat medic, they tend to say something like, “So... 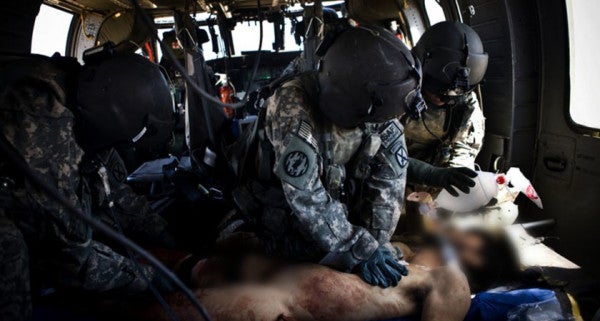 When people find out that I used to be an Army combat medic, they tend to say something like, “So if I get hurt you can fix me, right?” And my response, usually delivered with a touch of dark humor, is always something to the effect of, “No fucking way.”

I don’t say that because my medical skills are rusty, which they are, but because there’s a certain poise I’ve lost since leaving the military. I was a combat medic — a pretty good one, too. Now, I can barely make it through a war movie without the aid of a few Bud Light tall boys.

Being a medic is about more than simply having the ability to effectively apply a tourniquet, administer an IV, or stuff a wound. It’s a cockiness. An attitude. A mentality that bears an exceptional tolerance for gore and human suffering. It’s also, to some extent, a willingness to die. Because when the shit hits the fan, it’s the medic who’s expected to run headlong into the blades.

Soldiers board a Blackhawk in Afghanistan.Photo by Harry Sanna

And that’s precisely what director Harry Sanna sought to capture in his upcoming documentary. The film, aptly titled “Trauma,” centers around a U.S. Army medevac unit deployed to Afghanistan in 2011. Filmed over the course of several weeks, and including additional footage from the years Sanna spent covering the war as a journalist, “Trauma” offers a rare window into the insane world of combat medicine.

“The reason for making this film is to offer civilian audience an unfiltered glimpse at what it’s like to be a medic at war,” Ryan Cunningham, the film’s producer, told Task & Purpose. “It’s also about their individual journeys home, where struggles with PTSD and the other effects of war are very real.”

With the film currently in post-production, the filmmakers have turned to Kickstarter to raise the funds necessary to complete the project. I am, of course, biased toward anything that even vaguely resembles my war experience, but to someone who lived this stuff, “Trauma” looks like the real deal.

I might need more than a few tall boys for this one.

An extended version of the trailer is available here.