I’m beginning to suspect that constantly writing about war isn’t good for my psychological health. Since starting at Task &... 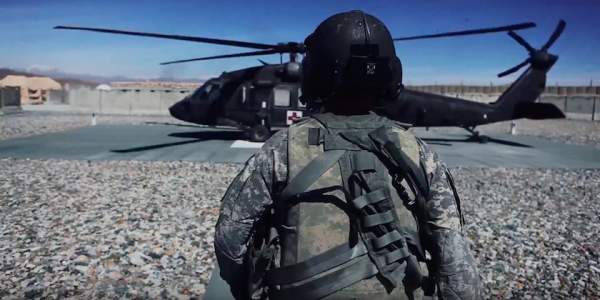 I’m beginning to suspect that constantly writing about war isn’t good for my psychological health. Since starting at Task & Purpose two years ago, I don’t think I’ve had a single dream that didn’t feature at least one firefight or an incoming mortar round. I’ve heard other veterans say that they find writing about their war experiences therapeutic, and, honestly, I thought that was going to be the case. But it hasn’t been at all. My first job as a writer was at Maxim. I liked those dreams a lot better.

This isn’t a resignation letter. It’s a review of Trauma, a documentary about a U.S. Army Black Hawk medevac crew that debuted Jan. 18 on iTunes and Amazon. The film’s titleis just as much a reference to the physical wounds of war as it is its psychological aftershocks. Director Harry Sanna spent several weeks embedded with the crew in Afghanistan in 2011, which stands as the second deadliest year for coalition forces since the start of the war. The film, a study in contrasts, jumps back and forth between footage of the crew in the thick of the action and small-town U.S.A., where several years later we find our subjects still struggling to adapt back to civilian life. It’s hard to tell which is worse: Afghanistan or the suburbs after you’ve spent a year constantly flying in and out of shitstorms pulling wounded soldiers off the battlefield. Our subjects seem a lot more miserable in the latter.

I interviewed the film’s producer, Ryan Cunningham, in April 2016, right after his team had launched a Kickstarter campaign to raise funds to complete the production. He told me that “the reason for making this film is to offer civilian audiences an unfiltered glimpse at what it’s like to be a medic at war.” He certainly made good on that promise. Like the film’s subjects, I served as a medic in Afghanistan during the surge. And while I wasn’t on a medevac crew — I was attached to an infantry platoon — watching Trauma was like watching a highlight reel of all the memories from my own deployment that I had suppressed long ago. To give you a sense of just how unfiltered the film is, it made me remember what it feels like to hold human brains.

Perhaps more unsettling is how the film captures the crew members’ lives after combat. Interwoven throughout these scenes are themes we’ve seen in plenty of other movies and documentaries about the War on Terror: anger, islamophobia, nightmares, flashbacks, alcoholism, antidepressants, failed relationships, suicidal ideation. But what sets Trauma apart is how much time Sanna let pass before he caught up with his subjects. The juxtaposition will resonate with any combat veteran who looks back at old deployment photos and hardly recognizes himself. In Afghanistan, these men were dirty, sleep-deprived, and neck-deep in death and human suffering. But it hardly mattered because they were hooked on the cause. One describes it as “highly addictive.” He’s right. There’s no better job in the world — that is, while you’re doing it. Then there’s the come down.

Medics are confronted with the tragedy of war more than most. Mutilated bodies, wounded children, the smell of cauterized flesh, the feeling of a young soldier’s pulse as it fades into oblivion: Like the subjects of Trauma, when I reflect on my time in Afghanistan, those memories overshadow everything else. It’s hard to have all that stuff in your head and also feel how you expect to feel when you come home from war — like a hero, or at the very least, someone who deserves to be thanked for their service. I imagine that the subjects of Sanna’s documentary feel the same way, and I applaud them for allowing a filmmaker to scrutinize their lives so closely. Thisisn’t an uplifting film, but it’s not a total buzzkill either. A few of the characters do, ultimately, find solace. And if there’s one overarching lesson to be gleaned from their stories, it’s that you won’t find the light at the end of the tunnel as long as you remain fixated on the past. That, of course, is easier said than done, especially when you used to save lives for a living.