On Sunday night, a full house turned up at the Tribeca Film Festival in Manhattan for the premiere of“House Two,”... 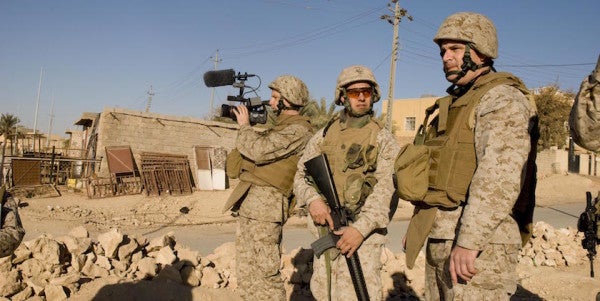 On Sunday night, a full house turned up at the Tribeca Film Festival in Manhattan for the premiere of“House Two,” an investigative documentary more than decade in the making that makes troubling allegations regarding the Marine Corps’ handling of one of the most brutalwar crimes cases of the Iraq War. It also raises questions about the involvement of the current Secretary of Defense in a serious miscarriage of justice.

When filmmaker Michael Epstein originally set out to make a 40-minute documentary about the trial of Staff Sgt. Frank Wuterich, one of the Marines implicated in the 2005 slayings of 24 Iraqi civilians in the city of Haditha, “Jim Mattis was the last man on Earth I wanted to malign or take on,” he told Task & Purpose.

The film tells a dramatically different story than the version presented by the media when Haditha was dominating headlines around the world. And it could prove problematic for the Marine Corps. It comes at a particularly delicate time for Mattis, a beloved military leader and once a favorite of President Donald Trump, who wasreportedly overruled by the President on the appropriate response to chemical weapons gas attacks in Syria, along with other policy issues.

The film’s argument relies in part on the testimony of special agents Mike Maloney and Tom Brady, both former Marines, who had helmed the Haditha investigation for the Naval Criminal Investigative Services and were responsible for providing the forensic evidence the Marine Corps needed to successfully prosecute the case.

Ultimately, the prosecution appears to have ignored or dismissed their findings, granting blanket immunity to seven of the eight Marines implicated in the massacre to build a case against Wuterich based almost entirely on their testimony. As Maloney put it in a recent interview with Task & Purpose, “They went after Frank Wuterich in the face of evidence that did not support it at any level.”

In March 2006, when allegations first surfaced that U.S. Marines had rampaged through a residential enclave of Haditha, killing unarmed men, women, and children, the Corps dismissed the claims as insurgent propaganda. The massacre began after a convoy of Marines with 3rd Battalion, 1st Marines struck an IED that killed a beloved member of Wuterich’s squad and wounded two others.

According to the Washington Post, a classified Army investigation later concluded that officers in the accused’s chain-of-command “may have willfully ignored reports of the civilian deaths to protect themselves and their units from blame.” House Two goes a step further, making a case that the prosecution put witnesses on the stand who they knew were lying in an attempt to, as Epstein put it, “bury the truth in court.”

Gary D. Solis, a former Marine Corps judge who now teaches U.S. military law at Georgetown University, flatly dismisses Epstein’s hypothesis. “It’s my experience that in the Marine Corps, we do the best we can,” he said. “Some cases just don’t make it. Sometimes you screw up, you make a mistake. Sometimes you make a conscious decision to go after A when you should’ve gone after B, but it’s not because you had a bad motive. It’s just because you screwed up.”

“House Two” is a reference to the designation NCIS agents used in their reports when referring to the home where some of the grisliest killings took place. Two women and five children were shot to death at close range in one of the bedrooms. Maloney’s forensic analysis — and the testimony of a survivor that the prosecution withheld from investigators until it was too late — indicated that Wuterich couldn’t have been one of the shooters. The prosecutors charged him anyway.

In January 2012, Wuterich walked out of a courtroom on Camp Pendleton having pled guilty to just one count of negligent dereliction of duty. His punishment amounted to a reduction in rank of private. The Haditha case had been one of the longest, most expensive courts-martial in history, but neither he nor any of the other Marines involved in the massacre spent even a single day in the brig.

And as the convening authority who signed off on many of the key decisions along the way, including granting immunity to Marines who, the forensic evidence suggests, may have committed serious crimes, Mattis made such an outcome all but inevitable, the film contends.

“I’m not going to speculate on why Mattis did what he did,” Epstein said. “My only hope is that he watches this film, realizes how fucked up it was, and goes back and fixes it.”

The Office of the Secretary of Defense did not respond to a request to interview Mattis for this article.

Opinions about how and why the prosecution’s case against the Marines failed so spectacularly varied among the members of Wuterich’s defense team, who attended the premiere and fielded questions from the audience after the film. Attorney Haytham Faraj, a former Marine Corps lawyer who now practices law as a civilian, said he had worked with Mattis in the past — including on another war crimes case — and knew him to be a very scrupulous convening authority.

“James Mattis is one of the most detail-oriented commanders the Marine Corps has known, and there is no way he didn’t read every document in this investigation,” Faraj said. “I think that Mattis understands the challenges of war.”

Faraj’s former Marine Corps colleague, Colby Vokey, disagreed, explaining that he too had previously worked with Mattis — “on many different matters” — and was certain the decisions he made throughout the Haditha case were guided by “a lot of bad” and “conflicting” advice.

“You can take a set of facts and what happened, and kind of pitch a story, and if you control the evidence to your audience, that’s all they’ll know,” Vokey said. “We’ve read all of those documents. I can’t even count the number of times and there’s still a disagreement among the three of us about exactly what went on in the back bedroom of house two.”