Dick Portillo, as fast-food connoisseurs know, is the hot dog and Italian beef king of Chicago, the man who started... 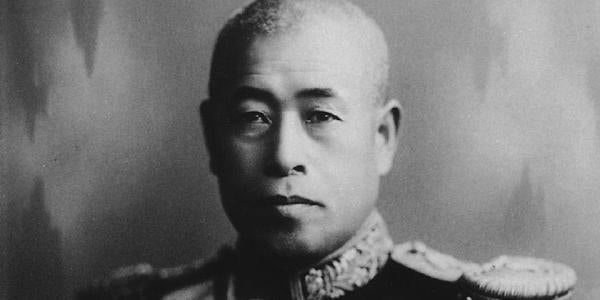 Dick Portillo, as fast-food connoisseurs know, is the hot dog and Italian beef king of Chicago, the man who started his business in a food trailer in 1963 and built it into an empire of 38 successful diners before selling it reportedly for nearly $1 billion two years ago.

Isoroku Yamamoto is a venerated figure in Japan and a sinister figure in U.S. history. As commander of the Japanese navy beginning in 1939, he opposed war with the U.S. but dutifully orchestrated the attack on Pearl Harbor on Dec. 7, 1941.

Sixteen months later, Yamamoto was killed when U.S. pilots shot down his plane. His death dealt a catastrophic blow to the Japanese psyche and war effort, and it was a crucial turning point in the war.

In a safe in Portillo's sleekly appointed ninth-floor office is what would be a most unlikely link between the two men: a gold tooth that may have been in Yamamoto's mouth when his plane was attacked over Papua New Guinea.

“I'll do whatever it takes to find out,” Portillo said one afternoon, holding the gold tooth in his Oakbrook Terrace conference room while recounting his acquisition of the incisor.

Portillo's friends are making contacts across the Pacific to determine the tooth's origin.

“And, if I can prove that to the world, maybe there'd be a lot of people interested in that. I think there would be.”

Glint in the wreckage

How the founder of a Chicago hot dog empire obtained the tooth that may belong to one of the most revered figures in Japanese history starts with Portillo's love of World War II history.

A former Marine who served in peacetime, Portillo, 76, has a strong interest in the Pacific theater of that conflict and has organized at least five group expeditions to significant WWII sites in the region.

One of those trips was in July 2015. Portillo had taken seven other South Pacific history enthusiasts to the island of Bougainville in Papua New Guinea, where a friend's father fought in the war. Portillo had read that Yamamoto's plane had crashed on Bougainville and pitched the idea of visiting the site.

The eight explorers enlisted a few local residents, hopped in two trucks, crossed rivers and plowed along a rutted, muddy road. Led by machete-wielding residents clearing the way, the group trekked through knee-deep mud, harassed by insects in the humid jungle, Portillo and others on the trip recalled.

About an hour and 45 minutes after they'd started the trip, the group arrived at the deteriorated wreck of Yamamoto's plane. One of them, retired college professor Anderson Giles, 67, crawled through the fuselage.

When he emerged via the torn front midsection of the plane, Giles stepped in mud to the left of the wreckage. Portillo was about 15 feet away.

Adm. Isoroku Yamamoto was traveling on a Mitsubishi G4M Bomber, codename “Betty” by the Allies, like this one when he was shot down.

“As soon as I did,” Giles recalled in a phone conversation from his home in Maine, “there was this little glint that oozed up. I thought, 'what was that?' and I stepped back and picked it up.”

Holding the tooth, Giles' mind raced through knowledge gleaned from his nearly three decades of research, documentary film work and visits to more than 50 plane wrecks in the region. He recalled that Yamamoto was shot with a large-caliber round in the jaw during the attack, that he was seated on the left of the aircraft and that his body was found at the left front of the plane.

“That's what caused the bells to ring in my mind,” Giles said.

The local clan owns the wreckage site, and the clan chief confiscated the tooth. Portillo, who'd funded the trip, had to fund a second one and buy the tooth.

Patricia Trowbridge, who'd been on the 2015 expedition, returned in May, met the chief on Buka Island in Papua New Guinea and purchased the tooth for $14,000, Portillo said.

“If it comes to be true, it's peanuts compared to the value that I would look at,” Portillo said in his office. He pulled the tooth from a tiny plastic bag in a prescription medicine bottle that had been in a soap tin. “If it doesn't, you win some and you lose some. I at least had to find out, and in order for me to find out if it was true, it's going to cost money.”

As vilified as he may be among some in the U.S., Yamamoto is a beguiling and sympathetic study of contrasts, historians say. He also had two connections to Chicago.

While a student at Harvard in 1919-21, Yamamoto learned poker and became an almost obsessive and masterful player. In fact, one historian reported that he used his winnings to fund a hitchhiking trip through the U.S.

And, in 1926-28, Yamamoto served as a Japanese navy attache in Washington, D.C., where he gambled with U.S. military members.

One of his Chicago connections centers on another recreation he enjoyed. In October 1934, during a three-day trip to Chicago, Yamamoto attended a football game in Evanston between Northwestern and the University of Iowa.

In Japan's buildup to World War II, he was a voice of moderation who opposed aligning with the Nazis, said Ian W. Toll, an American historian and author of two books on the Pacific in World War II. Yamamoto warned that the United States' industrial strength was formidable, even saying that Japan would lose the war with the U.S. if it lasted more than a year.

But, he was a dedicated military man, and when other leaders pushed for war, he followed their orders to carry out his plans for a crippling, pre-emptive strike against the U.S. After the surprise attack on Pearl Harbor, Yamamoto said he feared the Japanese had awakened a sleeping giant.

Yamamoto's other Chicago connection is more ominous. Retired U.S. Supreme Court Justice John Paul Stevens, a Chicago native and graduate of University of Chicago and Northwestern's School of Law, worked on the Navy intelligence unit that interpreted the coded Japanese message about the commander's trip to Bougainville on April 18, 1943.

The U.S. military used the message to intercept and shoot down Yamamoto's plane.

“If it does prove to be Yamamoto's tooth, I think that's a fascinating and important story,” Toll said. “Yamamoto is a towering figure in Japan, a colossus in Japanese history.”

Giles and Trowbridge have taken the tooth or photos of the tooth to three dentists, who verified it is a human tooth and said it was removed by a violent act or trauma. One dentist, Dr. John O'Keefe, who had numerous wealthy, adult Japanese patients in the mid-1980s, said the contours and design of the crown were very similar to those of his Asian patients and common in Japan during Yamamoto's lifetime.

“I wish I could tell you conclusively it was his,” O'Keefe said by phone from his office in Twisp, Wash., “but …”

Beyond those efforts, Giles and Trowbridge are reaching out to contacts in Japan and are working with a U.S. research librarian who has connections to WWII historians at Osaka University.

Complications stand in the way. A total of 11 men were aboard Yamamoto's doomed plane, and their bodies were found scattered around the immediate area when a recovery team reached the site about two days later. Within a couple of days of the recovery, Yamamoto was cremated.

And, it's unclear whether his dental records exist, Japanese naval historian Yukoh Watanabe, author of a 2015 book on Yamamoto and director of a documentary on the commander, said via email from Yokohama City.

Watanabe also noted that the official historical record of Yamamoto's body claims that he was found virtually injury-free.

But many historians doubt the conclusion that Yamamoto's body could have been so intact and suggest Japan's leaders propagated the story to preserve Yamamoto's warrior-god stature and to minimize national trauma over his death.

“I have to say that it is little possibility it belonged to Adm. Yamamoto,” Watanabe wrote of the tooth, adding that it likely belonged to someone else aboard the plane. But, as a romantic of history, he said, “I also hope the gold tooth belongs to Adm. Yamamoto.”

At his office, Portillo said he holds out hope that experts may be able to extract DNA from a tiny human tooth bit embedded in the gold.

Before he placed the tooth back in its plastic bag and into the prescription medicine bottle then into the soap tin, Portillo said he would like to give it to the Japanese government. All he wants is to make a documentary about his find.

“I don't want to make any money,” Portillo said. “I don't care if I keep the tooth, you know what I mean? The value to me is the fun, the experience of doing that, the fact that I had a lot to do with it, and history.”